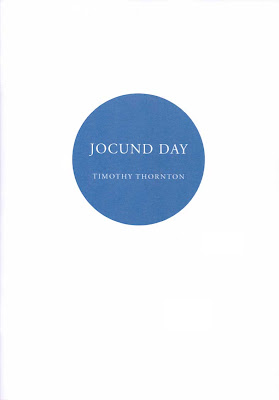 Incessant the retrieval and re-launch of the old jittery particulars, incessant the fatigue of doing so. I believe the current “period”—and its “pieces”—to be identical to that period whence my retrieval began, and then, suddenly, am wholly disabused of that notion by seeming waywardness and infidelity, the gone-off rotting impermanent smell of the clamorous new. Teach me how to read that, I say, teach me how to read and I shall withdraw my incipient perusal smackdown, my dysphoria made of insolvency . . . I used to cotton to utter syntactical resilience and the possibility of a single fierce truth caught by merest sentence-ry—now the rubrics bleed me skeptical . . . I keep reading and re-reading pieces out of Timothy Thornton’s Jocund Day (Mountain Press, 2011), suckered by the musicking, quasi-unconvinced by the pith. Here’s one:

Without knowing it it is

hours after rowers and the sawmill

hum etc., and about your slavishness-

smith shoulders the finch gantry oh
quickens, a flurry of gold through any
and all actual shutters

is an asphalt stemming thirst, mouths
open, cupped to grout us the whole
outside sea. When

a liquid rises about a leg the rifling is
absolute, and in / this case: tasked ah

senator me in will you, delegate us up
over filament bridges
hard and crow crow crow do
be so YES stupid: as to
this you rafter me

back your entire gull body newly
turned, fully grown to arching
alabaster smack and mobile like a fucking
awesome bracketing you
sky all of you down again / and landing
breathing so assuredly on me on the bed here, so
is my strand of wholly sincere herringbone glances
valid and dovetailing yourself the greased, annealed grid
you let us
drip O almost to the hooves, sweating like gone off
ham (like shiny ham like on a credit card) and complete as
granite and easily as quickly
endorsed. You are (pleasingly) quite
arson and I do have this
structural tongue brief slick cadet.

Now lie and hear these for the sake
of example orange jackets doing their
bitingly legitimate gravel thing / well,
meniscus piss boot man, whoever
that is hissing ambassador by their
hellish other confederates expects mm a
fungus stem to creak me out, of your
birch calves, to this, suddenly not quite
sanctuary, as it was: and is right, at

last, about how to burn the tar summer
thru with fuck and vassalage and drink.

How to read “Bull Canvas”? Is knowing that some of the pieces in Jocund Day were previously printed in Cambridge Literary Review 1 (2009) and Hot Gun! 2 (2011) any help? Lineage markers pointing vaguely at the recently burgeoning crowd “around” J. H. Prynne. How is something like (the noun pile-up in) Thornton’s “You are (pleasingly) quite / arson and I do have this / structural tongue brief slick cadet” related to (something like) Prynne’s “Fluting awash previous sure to find on the margin affront no big thing offset intercepted for fluid introits. Did frequently gallivant splint tongue flicker spring of air well glad” (out of Kazoo Dreamboats or, On What There Is)? Is it (at least partly) the case that I tend viscerally to reject the work of (perceived, even if misperceived) idolatry? Perhaps pertinent here: Keith Tuma in the direct and likeable On Leave: A Book of Anecdotes (Salt, 2011) talking about Prynne’s own rejecting of “the cult of personality and whatever it is about poetry that sometimes makes poets out to be gurus”: “Prynne’s correspondent Charles Olson arguably accepted this role late in his life, apparently to Prynne’s regret.” Tuma then suggests that Prynne’s own “brilliance as a teacher and . . . reputation as a forward-looking poet, the leader of an English avant-garde” have, predictably enough, “made him a kind of guru, whether he likes it or not.”

Resisting a coterie or resisting a poem? Truth is, through all the noise in the signal, Thornton’s piece delivers a lyric punch. (Or is it because of the noise in the signal—is “bitingly legitimate gravel thing” noise or signal? and what about “meniscus piss boot man”? Arguably, a “single fierce” (or damped down) definition of the lyric is: “noisy I-saying.” Endlessly unrepeated ways to say one thing: I am here. I love. I hate. I am uncontainable. Etc.) Pertinently, the epigraph of Jocund Day reads (wonderfully):

Ô but wherefore should soe faire a face, retaine a heart soe cruell?
Then dispare, dispaire aspiring thoughtes, to gaine so rare a iewell.
O but when I cull, & clip, & kisse,
mee thinkes there hidden treasure is,
Which whispers in myne eares all this,
Loue’s flames require more fuell.

Is the history of the lyric that: “Loue’s flames require more fuell”? The uncontainable lyric I requiring a burgeoning syntactical impropriety (“not quite / sanctuary”) to momentarily “stay” it? I recall Hugh Kenner somewhere noting how some feelings “can not survive a demand that we define our terms.” “Note too,” he writes, “that orderly syntax detracts from feeling, insisting as it does on what Swift, defining “style,” called “proper words in proper places.” “Proper,” naturally enough, changes. And what’s “improper” becomes “proper” with inconceivable velocity. (My inkling and discomfort: Prynne’s “improper” is now “proper” to an increasingly identifiable “Cambridgean” groupuscule. Menace of the pre-placed container, the contrary lyric I become mere “receivable.” Prynne, in Kazoo Dreamboats: “Zest for the contrary is mostly a style appetite . . .” Cautionary advice?)

All my ruminant guff may or may not “read” Thornton’s work with any justice. I remain intrigued by the “ear” (only Michael Haslam’s work, of what newer British work I know, would seem to provide equally exciting music), I like the way Thornton’s lines erupt unaccountably into iambics (or maintain Eliot’s “ghost of some simple metre . . . behind the arras,” though without the coy Eliotic peek-a-boo—“advance menacingly as we doze,” &c.) See, say, the lines in “Chamber Aubade”:

the tincture glitch the tax the lid I love I lark the
all I love encircling you in rifled white, we wick
the birds alight: amid: ashore:

injured, will ramify slick hindrance, veering ayres
this light their pale machine: sleep on, my
kiln, my rest, my zero point.

I like, too, the small yelps and grunts writ big (“ah,” “uh,” “mm,” &c.), lingual overflow, supplement and remainder. Here’s another (shorter) piece out of Thornton’s Jocund Day (one of several with the title):

that night I left

Venn diagrams in the sand
(moonlit, etc.), and

yes, I wept
more than the tide.
All lay: / unremarkable,

redundant. It
drew parallels. At least

through all of it
your (in such stifling

how I read and how you