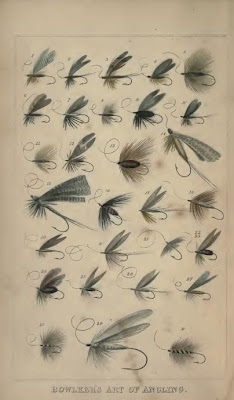 Ezra Pound, putting the homegrown solitary art of tying flies up against usury (“Usury rusts the man and his chisel / It destroys the craftsman, destroying craft”), out of Canto LI:

Blue dun; number 2 in most rivers
for dark days, when it is cold
A starling’s wing will give you the colour
or duck widgeon, if you take feather from under the wing
Let the body be of blue fox fur, or a water rat’s
or grey squirrel’s. Take this with a portion of mohair
and a cock’s hackle for legs.
12th of March to 2nd of April
Hen pheasant’s feather does for a fly,
green tail, the wings flat on the body
Dark fur from a hare’s ear for a body
a green shaded partridge feather
grizzled yellow cock’s hackle
green wax; harl from a peacock’s tail
bright lower body; about the size of pin
the head should be. can be fished from seven a.m.
till eleven; at which time the brown marsh fly comes on.
As long as the brown continues, no fish will take Granham . . .

This Fly is found on most rivers, it appears in the beginning of March and continues till the end of April. Its wings stand upright on its back, and are made of a feather out of a starling’s wing, or the blue feathers that are to be found under the wing of a duck widgeon; the body is of the blue fur of a fox, or the blue part of a squirrel’s fur, mixed with a little yellow mohair, and a fine blue cock’s hackle wrapt over the body in imitation of legs; its tail is forked and of the same colour as the wings; the hook No. 9. This fly may be fished with from ten in the morning till three in the afternoon, but the principal time is from twelve till two. It is most plentiful, and the fish take them best, in dark, cold weather.

Numerous editions of the book were printed, with noticeable variations. In the 1854 edition, the lines read:

This fly is found on most rivers, and is in appearance one of the most delicate insects that frequent the water; and, what is rather extraordinary, it is more numerous, and the fish take it best, in dark cold weather, being but seldom seen when mild and warm. It appears early in March, and is a good fly throughout the year. The wings stand upright on the body, and are to be made of a feather from a starling’s wing, or a pale blue feather from under the wing of a duck widgeon; the body of the blue fur of a fox, or water rat, or squirrel, mixed with a small proportion of yellow or lemon-coloured mohair; and a fine blue cock’s hackle for legs; the tail is forked, and is to be formed with two fibres from the same feather as the wings are made of; the hook No. 9. It may be used from ten o’clock in the morning till three in the afternoon; but the best time of the day is from twelve till two, particularly in March and April.

If the weather be warm, this fly makes its appearance in the beginning of April, and it continues on the water about a fortnight; it is a delicate fly, and but seldom seen on cold days. It derives the name of Green-Tail from a bunch of eggs, of a green colour, which it deposits on the water while floating on the surface. The wings lie flat on the body, and are made of a shaded feather from the wing of a partridge or hen pheasant; the body of the dark fur of a hare’s ear, and a yellowish grizzled cock’s hackle for legs; a small quantity of bright green wax (or green harl from the eye of a peacock’s tail), about the size of a pin's head, may be applied to the lower part of the body, after the fly is completed, for the tail, and it has a very natural appearance; the hook No. 9. This fly is to be fished with from seven o’clock in the morning till eleven, at which time the March Brown comes on, and so long as the Brown continues, the fish will not take the Granam; from five in the evening till dark it may again be used with success.

Selecting, arranging—to see what’s kept, what’s scrapped. Carroll Terrell, in A Companion to the Cantos of Ezra Pound (1980) identified Pound’s source and quoted much of the Art of Angling’s “Granam” material. He adds: “One of the amazing things revealed in The Art of Angling is the precision of nature in process. Trout will rise for a dressed fly only if it duplicates exactly a natural fly that can be expected not only that season of the year but also the right time of day. Any variation from nature and the fish will not take the bait.”

Here’s the thing. A somewhat random reading of the Pound lines against (in the sense of “adjacent to”) a chance reading of Stephanie Anderson’s poem “This Cleaving and This Burning”—out of The Nightyard (Noemi Press, 2011) pointed me to seeing hints of Pound in Anderson’s work, its curt emphatics, its refusal of excess, lack of noticeable slack, see (mid-“This Cleaving and This Burning”)—

The furnace for a coal-lit cellar.
Size them all:
anvil, brick, animal-breath;

Pouring the basement you size the low.
Before, years cutting foliage to field,

Stake out the land in uniform widths
and size enough; the fossil record is strewn
or usually must have hard parts.

First furrows through the middle.
Running to deep, failure to scour,

alteration of hard parts is common.

Anderson’s note: “The title of ‘This Cleaving and This Burning’ is taken from Hart Crane’s ‘Legend.’ The following were used for source material: Small Farmers Journal, homophonic translations from the Sigur Rós album ( ) and A Golden Guide to Fossils.” (Out of Crane’s poem, and pertinent to the cumulus attained: “. . . drop by caustic drop, a perfect cry / Shall string some constant harmony. . .”) Is it simply the lingo of the ‘how to’ discourse, the sustenance of attending to the instress “flush and foredrawn” of fact, the handmade that’s common to Pound’s fly-tying and Anderson’s sizing and fossil-hunting lines? Requirements modify effects: inchoate finish adumbrated in ruse of onset, moth in pupa hid. Meaning, as Anderson puts it (“The Mule Spindles”): “You form, watch our tools may yet out-spin us.” Or, out of “Barnshack, or, Wooden Balloon: A Paring of Miss Dora’s Chronography”: “Other structors made run-off.” Structor Pound, for example. Regarding The Nightyard: a supplementary “take” required. (Needed, too, a ‘how to’ discourse of how to write a review . . .)