“I think that knowing to look at all and knowing what to look for is rather a lot . . .” 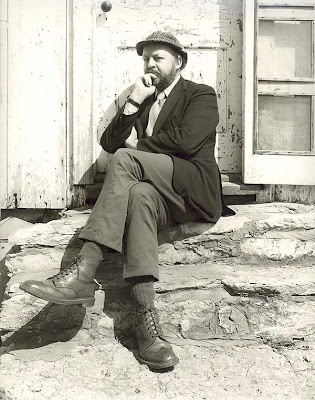 Out of Jonathan Williams’s 1971 The Loco Logodaedalist in Situ: Selected Poems 1968-70, the lengthy note preceding Williams’s “Excavations from the Case-Histories of Havelock Ellis, with a Final Funerary Ode for Charles Olson”—somewhat truncated:

Charles Olson made a vigorous effort long ago to teach me two things. One, that poetry is a process, not a memoir. Two, that there are many other uses for words than to bring the private soul to the public wailing wall. Philistines and lowbrow magazines always object to this—they want the word to bleed, they want the poet’s pants down, they want a mess on the floor to keep as a sacred relic. One knows ladies, librarians, and Hierophants of the Ego-Trip who still have pieces of the piano bench destroyed by Thomas Wolfe; the carpet be-vomited by Dylan Thomas; the glass dropped by Ferlinghetti [. . .] ; the famous vasoline jar of A. Ginsberg; [. . .] the last feces of Walt Whitman preserved in a case in the Camden Museum [. . .]

Guy Davenport credits me with following a tradition out of Whitman (who, he says, made a note to himself to invent “a perfectly transparent plate-glass style, artless, with no ornaments”*), Pound, Dr. Williams, Zukofsky, and Olson: a poetry neither meditative nor hortatory but projective. “It insisted that the world is interesting enough in itself to be reflected in a poem without rhetorical cosmetics, an arbitrary tune for melodramatic coloring, or stage directions from the literary kit and caboodle.” [. . .]

[. . .] Davenport’s revelation of what could be done by leaving the Songs of Archilochos in their fragments was the real tip-off. The body of a poem (like the body of a statue of Pan) reduced all the way down to

(crotch)
suffices more than adequately; i.e., sublimely. To jump from that reduction to Anton Webern is not capricious. His manipulation of a few tones in perpetual variation could produce what Schoenberg said were “whole novels in a single sigh.” (If it’s not Schoenberg, then it’s Thomas Mann.) There are instances before which one wants to fall silent. At such points, the whole area of ‘The Found’ comes into play.

I am also speaking as a follower of the Bishop Euhemerus**, in whom Charles Olson believed. By such extension I would affirm that ‘poems’ are but the deified prosaic speech of plain men and women; that ‘art’ is in ‘raising the common to grace.’ [. . .]

Adrian Berg, the London painter, got to discussing Havelock Ellis with me one evening, and expressing his respect for Ellis’s pioneer work in acquiring sexual information in the form of case histories. He later lent me a copy of “Sexual Inversion” from Studies in the Psychology of Sex. This third edition (1926) up-dated findings first published as early as 1901. I, too, was impressed with the frank, but courtly narratives from a time usually garbed in the trappings of the Forsyte family or the circumambience of the James brothers. Not even Lawrence’s people are often so unbuttoned and able to tell us what is eating them—inside and out.

My first thought was to fabricate a series of texts dealing with the present but using the Ellis style. The effort soon flagged, albeit more edifying than the language used in such scientific marvels of the New San Diego Pornography as “Beach-Boy Group-Grope.” At this juncture I received a manuscript from the young Scots poet, Thomas A. Clark, called Whatever You Do Guard (Poems After Samuel Palmer), made from prose texts by a method that suddenly gave me a way of working the Ellis material. Questioning the poet, he said: “Years working in a short space via haiku, epigram, W.C. Williams, Creeley, Concrete, etc., the trouble was, how to distance it from one’s own mind. The language became more and more self-referent and ‘obscure’ in the worst sense. So I’ve been making poems using texts which were ‘outside my own head,’ and treating them in different ways: permutational, fragmentary, etc. . . . I set about experiments like cutting columns in half, reading quickly across columns, or placing frames over pieces of prose. I think that knowing to look at all and knowing what to look for is rather a lot . . . Dom Silvester Houédard and Edwin Morgan also use cutouts, but what is interesting is that we all use it in the same way and get such different results.”*** (The use of collage by the early Cubists immediately comes to mind.)

I had, myself, discovered that a rectangular cutout laid over a section of prose text was a way to focus the response. The cutout used for Excavations was about an inch and a half wide and two inches deep. It was positioned, variously rotated, etc., over various sections until material began to re-shape itself. The margins and the spaces become those left when the dross is thrown out. What I was looking for were the fire-points, the garnet crystals free of their matrix.

Having thus worked, mined, or excavated the Ellis, I received a copy of Tom Phillips’s A Humument (Notes on a Work in Progress), published in the February 1970 issue of the London Magazine. It is a veritable, utterly valuable manifesto on this way of working found material. "A Humument is an attempt to make a Gesamtkunstwerk in small format: it includes poems, stories, music-scores, aphoristic notes on aesthetics and other philosophical topics, autobiography, pages dedicated to individuals, pop songs, language games, parodies and jokes, as well as the longer sequences which form the main substance of the book . . . In some sense a Humument, because it is less than what it started with, is a paradoxical embodiment of Mallarmé’s idea that everything in the world exists to be put into a book. All I know is that there is little that I wanted to say that I have not been able to wrest from those pages.” That last sentence is the point. The poet’s Muse, in the present instance, has not been stifled by the drab, matter-of-fact overlay of Ellis’s prose. All that you could want is there—if you dig at it with the perfected attention used to make any made poem. The ‘method’ is a tool like any number of others [. . .]

A few of Williams’s Ellis-excavated histories:


it is a dark crimson

it affords me relief.


the sight of the naked
river,

increased by
a young Turk smoking
below the waist

Is it Jonathan Williams, then, who provides Ronald Johnson with a working model for Johnson’s 1977 Radi os erasures? Williams’s note (and practice) of “excavating” is remarkable for its advanced percipience of post-cut-up techniques, doings seemingly “in the air” at that moment in the late ’sixties. No sense of a precise composition date for Williams’s “Excavations”: is it possible he’d read these lines out of Phillips’s London Magazine piece? “Each page is worked on to extract material, is mined for its undertext of fact and rhapsody, or, as often, more brutally excavated for matter quite alien to the original novel.” Phillips and Williams did work together to make a book—text by Williams, art by Phillips—called Imaginary Postcards (printed—and semi-suppressed—by Trigram in 1975—one bookseller reports a laid-in printed statement announcing: “As a result of a disagreement between the publishers and one of the authors over the design of the book, the publishers have decided not to publish it. Before this decision was reached 120 copies were bound, which are being distributed to friends of Trigram Press.”) At what point did Williams’s and Phillips meet and the slurry of exchange commence?

Rules for Composition
A perfectly transparent plate-glassy style, artless, with no ornaments, or attempts at ornaments, for their own sake,—they only looking well when like the beauties of the person or character, by nature and intuition, and never lugged in to show off, which nullifies the best of them, no matter when and where.
Take no illustrations whatever from the ancients or classics, nor from the mythology, nor Egypt, Greece, or Rome—nor from the royal and aristocratic institutions and forms of Europe.— Make no mention or allusion to them whatever, except as they relate to the New, present things—to our country—to American character or interests.— Of specific mention of them, even for these purposes, as little as possible.—
Too much attempt at ornament is the clur upon nearly all literary styles.
Clearness, simplicity, no twistified or foggy sentences, at all—the most translucid clearness without variation.—
Common idioms and phrases—Yankeeisms and vulgarisms—cant expressions, when very pat only.—

(Deleted paragraph at end: “Mention not God at all.”)

*** Curious where Clark’s remarks originate. Repeated in Clark’s 1971 Jargon Society book Some Particulars. Repeated (announced baldly, “Thomas A. Clark speaking:”) with context and pointers stripped out (both the phrase “via haiku, epigram, W.C. Williams, Creeley, Concrete, etc.” and the final sentence referring to “Dom Silvester Houédard and Edwin Morgan” oddly lacking) by Ray DiPalma in “Some Notes on Thomas A. Clark” in the fifth number of L=A=N=G=U=A=G=E (1978).