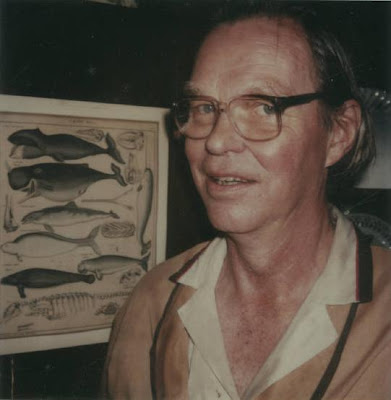 For ten days we would eat moderately abstain from women inure ourselves to hardship by cold plunges in the stream the night before the game we would fast and watch all night submit to scarification our skins scratched by seven splinters of turkey bone set in a frame of quill the ball ground was five hundred yards long the ball of scraped deer skin moistened stuffed with deers hair sewed with deer sinews goals marked with branches were set up at either end the object being to drive the ball through the opponent’s goal the ball must be picked up by the racket and not by the hand but anything else was allowed the umpires were not called umpires but drivers. There were twelve goals to a game and if the twelve were not achieved by sunset we would fast watch another night and play the next day or as many days as might be necessary fasting and watching the intervening nights . . . .

Paul Metcalf, out of Will West (1956), the story of an Indian pitcher who flees west after rather placidly killing a girl (I think of Camus’s 1942 L’Étranger and Meursault’s peremptory, sudden and rather inexplicable gunning down of the Arab on the beach near Algiers . . .) Metcalf, at the point where Will West is about to strangle the girl: “This is the decision the void the place where time stops the choice before an act enters the deadmarch. . . .” That “deadmarch” pointing undeniably at the repeated forced marches of Cherokees west to “Indian Territory” under the terms of the 1830 Indian Removal Act. Will West’s murder is something of a misdirected attempt at reclamation and recovery—of “what is / in the conch, / the gull and tern, / the long coastal sky”—Metcalf dubs the moment significant with ceremonious verse:

Come up from sand and briers,
Down from wing of curlew,

Out of mullet,
clam shell, and
frond of palmetto.

My parts fly back to my limbs.

Implacable Osiris unmistakably in those “limbs.” Metcalf’s method—interlarding “story” with blocks of historical material like the that of the “Indian ball game”—is a kind of “gathering of the limbs” itself . . . Guy Davenport, astutely, circa 1996, in the “Introduction” to the initial volume of Metcalf’s Collected Works:

Metcalf’s collaged textures are ultimately derived from Pound's ideogrammatic method in The Cantos, where images in a field of force make a complex sign, just as the radicals in a Chinese character add up in a kind of poetic arithmetic to a meaning. Each of Metcalf’s books is an ideogram. Whereas Pound’s . . . ideograms are, at least in the early cantos, resolvable . . . Metcalf’s remain a vibrant suspension.

Davenport’s seeing of Metcalf’s assembling of various “affinities” that belong together in a way that “eludes linear reason”—apt for Davenport’s work too. Congenial bookishness. So: Metcalf’s westerly-pushing Ferdinand De Soto hits a river:

De Soto and the Spaniards came to a great river the largest they had seen they named it Rio Grande and some suggested it might even be larger than the Danube camp was set up and the men cut timber to make pirogues for a crossing Indians appeared in canopied barges and canoes parting the waters of the Great River like an armada of galleys the warriors painted and feathered in ochre and vermilion discharged arrows and retreated thirty days the Spaniards labored the pirogues were towed upstream that the landing would be opposite camp the crossing was made men and horses ferried across the Great River the pirogues were destroyed but the nails saved for future use . . .

Or the Cherokee flatboat’d out of the Smokies:

The United States Government provided flatboats the John Cox the Sliger Blue Buck Rainbow Squeezer and Moll Thompson on the Hiwassee River for those Indians who could be cajoled bribed corrupted into leaving their homes in the Old Smokies and going West four hundred and fifty came out of their cabins lived in barracks by the river while they waited bought dainties whiskey and trinkets sold their western land claims to speculators before departure the measles broke out the flatboats floated down the Hiwassee a young lieutenant from West Point in command dow the Tennessee through the Suck the Boiling-Pot the Skillet the Frying Pan measles raged through young and old but mostly young the government provided salt pork and white bread and no medicine at every stop the Indians went ashore to cut wood for coffins . . .

Or Ulysses S. Grant at the “crookedest big river” at Vicksburg:

The river flows through soft alluvial mud intersected for twenty miles on either side by a web a maze of interlocking and obstructed bayous the banks overgrown with a wild jungle tangle the intervening spaces sunken in swamps it is the crookedest big river in the world also the orneriest changing or refusing to change its course at will this was the problem that face Grant the river that must be opened to New Orleans to cut off Confederate supplies isolate the Rebels from their granary in the West open now to St. Louis to Cairo to Memphis but at Vicksburg the bluff hills rise two hundred feet the highest and strongest point on the river terraced and fortified with entrenched batteries so that no ships could pass. Vicksburg the Hill City protected south and west by the river north by the fortifications at Hayne’s Bluff could only be attacked in the rear in the tail that is from the east Grant approached from the north moving slowly to keep open his supplies food forage and ammunition via railroad and river but the rail lines were broken by raids stores destroyed and Grant retreated he approached from the west tried to dig a canal in the peninsula opposite Vicksburg so the fleet could by-pass the batteries but the river refused to stay out of the work finally flooded the operation the soldiers had to withdraw or be drowned Grant tried to open a passage through the bayous but the Rebels felled trees across them in all his efforts he had failed with his northern soldiers suffering the terrors not only of the terrain but of the climate the pestilential fevers the pestilential fevers the drinking water on which the Confederates thrived . . .

Jonathan Williams, who writes about Metcalf in the 1973 Metcalf issue of the William Matthews and Russell Banks-edited Lillabulero (is that where I first gleaned an initial sense of Metcalf? how easy in that período de entreguerras, that period of détente prior to the Language boys’ revival of New American Poetry “camp”-markings—largely a marketing ploy—how easy to find writers of all sorts intercalated, Jackson Mac Low in Sumac next to Charles Simic, or Paul Blackburn next to Galway Kinnell . . .) in a piece called “The Roastin’ Ears Are In and Vida Pitches Tonight!”: “His approach to reading and writing is precisely the same as doing the daily chores; i.e., nothing to jabber about: do it.”

Put up gainst the historical affidavits: Metcalf’s impeccable ear for American speech, and (particularly, in Will West) the kind of boasting confessio one used to parry (or encourage) with grunts whilst hitchhiking. A trucker named Ferd showing off a snapshot of a girl—“Thirteen when that was took. She’s fifteen now. . . . Jailbait”—tucked up over the windshield of the cab:

“You know, there ain’t nothing about that gal but what you see right there.” He spoke tensely. “She’s the orneriest brat this side of the river. Lives alone with her aunt, down the road from us. The old woman works all day to support her and then comes home, and cooks dinner, cleans the house, does the washing, the ironing, and the dishes and then like as not sets down and makes a dress for her.That one just sets around after school and suns herself. . . . And you know there ain’t nothing you can tell her. She tells my wife jokes and the wife comes home and tells me and you’d think she just come out of the stable. What I mean, she knows it all. If my little woman knew I even had that picture up here she’d cut my throat.”
He turned to the window and spat out the cigarette butt.
“Man, there ain’t nothing to recommend her. Nothing but what she’s got under that sweater.”

Metcalf, whose great-grandfather’s Herman Melville, and whose subsequent novel Genoa (1965) sweeps together Melville and Columbus, in an interview with John O’Brien:

I put off reading Melville until my late twenties—after I had already written Will West. When I did read him, seriously and systematically, it was of course a revelation, but a revelation of something that was already there. This experience may have something to do with my notion that influences may be “in the air,” so to speak, and it is possible for a writer to be influenced by books he has never read. Any writer, in a given place and time, swims in inherited currents common to other writers of the same place and time, whether he is aware of this or not.

And: “Will West was the first one where I started to do funny things—introduce documentary material, ethnological material, archeological material, all juxtaposed in the flow of what was still essentially a conventional novel.” And Jonathan Williams, eulogist, reporting how he’d gone to some university “in darkest Cullowhee” to attend a lecture by Peter Schjeldahl (“I liked his blue-darter mentality. Rather like my own: able to hold onto a thought for about 10 seconds and then race on . . .”) just after learning of Metcalf’s death: “I told him Paul Metcalf had just died and asked him if he had known him or read him. He said he didn’t recognize the name. Which reminded me yet again how men of the city distrust loners and ignore those in the tall grass. In town artists organize into gangs and urban wolf packs in order to compete for the season’s fleeting attentions and, maybe, even for a few bucks . . .”