Announcing My New Book Some Alphabets 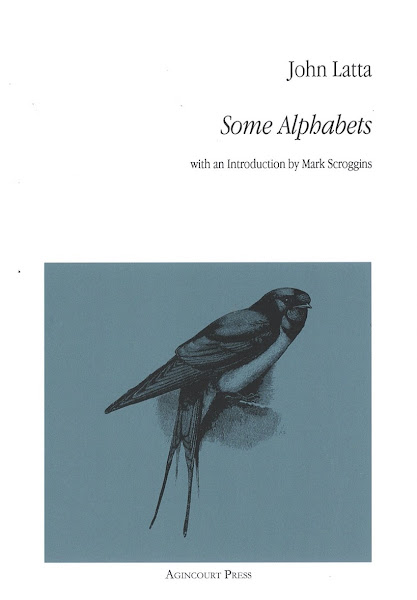 Pleased to announce the publication of my new book, Some Alphabets, just out in the Opuntia Books series of Agincourt Press. It is available to order here at SPD.

The back cover copy reads:

It’s in the gnarled wonders of its diction that John Latta’s poetry has its most immediate charm. The 130 poems of Some Alphabets fizz between levels of diction—the demotic, the formal, the high theoretical, the archaic, the futuristic, the expansive, the pinched, the ordinary and the just plain weird—so that every sixteen-line stanza becomes a foray into the delightful unexpected.
Latta has always had a way with words, a kind of weighty insouciance everywhere evident in Rubbing Torsos and Breeze, his previous collections: the ability to spin out simultaneously concrete sensual observation, offhanded bon mot, and penetrating insight. Some Alphabets focuses that linguistic multi-tasking to an abbreviated, impacted pitch, and stirs into the mix a dark and glittering compost of sixteenth- and seventeenth-century language. . . . “Stubbled profligate, I / Paw th’ancients, who paw me.”
—Mark Scroggins, in the Introduction


Born in 1954 in Willow Run, Michigan, John Latta spent early childhood in the Pigeon River Country of northern lower Michigan, and later attended high school in Ann Arbor. He was educated at Cornell University (A.B.), the University of Virginia (M.F.A.) and SUNY at Albany (Ph.D.). Since 1997 Latta has worked in Hatcher Graduate Library at the University of Michigan, in a variety of positions.
Latta’s first collection, Rubbing Torsos, was published by Ithaca House in 1979. A second collection, Breeze, won the Ernest Sandeen Prize in Poetry (selected by John Matthias) and was published in 2003 by the University of Notre Dame Press. Between 2006 and 2014 Latta kept a lively blog called Isola di Rifiuti.


A daunting map is all

Of disbelief to our fever’d

Are the sort antiquarians recommend—

The frenzy of a zealot’s

End, the history of a social

One sees the piercing blued

Stretch of a lake obtrude.

An envoi reports ‘the way

Is mere wavering,’ unmark’d, and

To hours of senseless hammering.


The lumbering bumblebee is out

Buttering up its bronze thighs

With pollen’d orbs of echinacea.

It’s a period piece, a

Gap in the goldenrod, dud

A coup I got ‘promptitude

‘Misewell’ make something of it.

Is how I been lately—

One summery day a redhead

Hopped off a blue bicycle,

Order’d a scoop of mocha-

Fed up with Greek antiquity,

Drowsy and remiss. The ample

Sky fills up with thousands

Fiery smokestacks. ‘To God, to

By one. ‘What falshede is

Is hanging off the door.

So the dare, the haughty

Defiant pity for what one

Cannot say. Moon is not