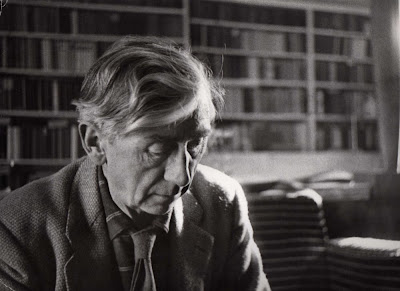 Made buttery by sleep-lack. (Up half the night rummaging through quotidian inconsequents, unintelligibly, uselessly . . . See William Dunbar: “This waverand warldis wretchidnes, / The failyeand and frutles bissines, / The mispent tyme, the service vane, For to considder is ane pane . . .”) Succumbing to the gross sublunary lutte, mean terrestrial dullardry. Like Edward Dahlberg, “I want to go to the sea, write in the morning, bathe in the afternoon.” (Letter to Jonathan Williams: 22 July 1960.) Against Dahlberg’s raillery and banter—Harold Rosenberg summed it up thus: “The Dahlbergian stance puts on notice those in whom nobility, style, persistence, and other similarly arbitrary qualities are lacking that, however correct and useful their ideas, they belong to some other profession than literature”—Herbert Read’s humility and finesse. In the joint Truth Is More Sacred: A Critical Exchange on Modern Literature Dahlberg’s T. S. Eliot—“mungrell versifier,” “cairn of spleen,” “St. John the Baptist of the mediocre,” “a disembodied nature”—“sang his senilia when he was young, and . . . has been a dying swan for fifty years.” Dahlberg’s routine flyting-taunt: “Eliot’s verse has never been virile and for this cause he is landless; viewing nature with a small, listless eye.” And, the Kansas City orphan mocks Eliot’s pretension and flight:

Eliot has followed Henry James’s footsteps. Like James, he left the land of the Yahoos for the literary “middens and piggeries” of London. What is droll is that Eliot’s work is glutted with the phrases of the American guttersnipe. Why leave the United States to be rid of its vulgarities in order to be a bad St. Louis poet abroad?”

Read’s reply turns around the way one’s initial reading of a thing marks it—and one—in perpetuo and makes nostalgia a rarely loud-sounded note of one’s critical “stand.” Worth repeating at length. Read begins by talking of the visceral poke of reading contemporaneously one’s “own,” and what “is not speculative, but ‘felt along the nerves’”:

April is the cruellest month, breeding
Lilacs out of the dead land, mixing
Memory and desire, stirring
Dull roots with spring rain . . .

To read those lines, and the 429 lines that follow, for the first time, is an authentic and incomparable poetic experience—incomparable, because even the finest lines of Shakespeare or Baudelaire cannot be experienced with the same actuality—the same personal application. Eliot was the prophetic poet of our time, projecting the images of our guilt and remorse, accusing our consciousness of corruption, and recalling us to “the Peace which passeth understanding.”
I have never sought to dissolve the unity of that first overwhelming impression. Whether the poem affected me in any deep metaphysical sense I doubt: I was too interested in the created phenomenon, in the creative miracle; for what Eliot proved, to a younger poet, was that the language could be reanimated; and what the critics even at that time called its Alexandrianism (one of them spoke of “the maggots that breed in the corruption of poetry”) was barbaric splendor in my unwearied eyes. Even now, when I am more instructed and therefore less receptive, I read the foxed pages with nostalgic emotion.
Nostalgia! I saw some reference to it lately, berating it as a literary sin. Half the literature in the world is nostalgic, for we seek continually to recover our lost innocence—and this is perhaps the secret of style. Most of our days we thing, speak and write in a demotic jargon, the currency of the mob, worn smooth for easy gossip and discourse. To find new currency for new perceptions and thoughts is the task of an uncorrupted consciousness—new metal, new moulds, a fresh minting for each occasion. It is a task demanding more concentration than most of us can command, but we can sometimes by memory recover what I would call first occasions, when events impinge on the consciousness for the first time and for the first time we formulate the appropriate verbal icons. Such events are often far to seek, through thorns and thickets of conventional speech, and when they shine out of the past, we then recognize them with emotion. Such emotion is nostalgic—the return of the prodigal sensibility.

Against the nostalgia (its golden sempiternal realm of possibility), loss inevitably (mechanically) raises its hammer-forged grimace, its human wares dinged and lustreless. The story of every poetic “movement.” Read:

We were all on tip-toe at the time, ready to welcome some “vast image out of Spiritus Mundi.” By now it seems there has been a miscarriage: the image has been shattered by war and tyranny, and these poets, who should have heralded a Renaissance, are themselves sunk into reaction or apathy, and their works have become thesis fodder for American critics.
It is my faith that eventually our poets will return to that “ceremony of innocence”; otherwise I see no possibility of a revival of poetry or any other art. But my faith grows dim. It is not that things continue to fall apart: on the contrary, there is a consolidation of ignorance, superstition and that ideal of comfort which to Burckhardt meant the end of our Western European culture. Writing in March 1873, eighty-six years ago, he prophesied that our art and science (but he did not mean our science) would have the greatest difficulty in preventing themselves from sinking into a mere branch of urban money-making. The utmost effort and self-denial will be necessary, he said, if art and science are to remain creatively independent in view of the relation in which they stand to the daily press, to cosmopolitan traffic, to world exhibitions. All these menaces have, since Burckhardt’s time, increased a thousand-fold, and to them we have added deterrents of which he could have had no conception—air traffic, radio and television. The activity of poetry is now reduced to inconceivable insignificance; and to try and woo the indifferent mob . . . is a vain effort.

Read’s consolatory nod to Dahlberg at the end:

You suffer this neglect more than most of your contemporaries, and that is because you do not make the compromises with the armies of ignorance that Eliot has made, that I have made, that most of us make. I don’t know anything about the consolations of martyrdom, but when I think of the humility of Blake, or the voluntary sacrifice of Hopkins, or the accepted obscurity of Emily Dickinson, then I realize that these consolations are real. It is the method of Charity, said Sir Thomas Browne, to suffer without reaction; it is the method of the great poet to write in the sure knowledge that a bright image never loses its lustre, though it be buried in the garbage of a doomed civilization.

Dahlberg, unconvinced and unassuaged: “let us not yearn for the books that deceived us when we were chatterboxes of literature . . .”