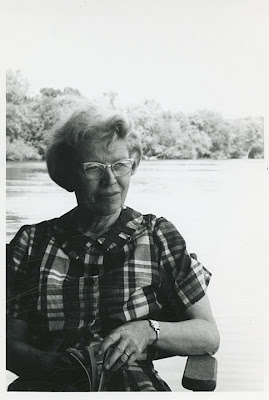 Duncan, out of “From a Notebook,” Black Mountain Review 5 (1955), replying to Olson’s “Against Wisdom as Such”:

This is . . . the radical disagreement that Olson has with me. In a sense he is so keen upon the virtu of reality that he rejects my “wisdom” not as it might seem at first glance because “wisdom” is a vice; but because my wisdom is not real wisdom. He suspects, and rightly, that I indulge myself in pretentious fictions. I, however, at this point take enuf delight in the available glamor that I do not stop to trouble the cheapness of such stuff. I mean that it is, for a man of rigor, an inexpensive irony to play with puns on pretending and pretension. I like rigor and even clarity as a quality of a work—that is, as I like muddle and floaty vagaries. It is the intensity of conception that moves me.

Niedecker reporting it to Zukofsky (14 August 1955): “Duncan says he likes intensity even if it’s an intense muddle.” (See, too, Niedecker’s “to be beautifully lost for a time and to me that’s poetry.”)

. . . made an entry in her journal only a couple of weeks before her death, about Emily Dickinson: “It is reassuring to hear the English pronouncement that Emily Dickinson is fifth-rate—they have such a capacity for missing quality; the robust evades them equally with the subtle. Her being sicklied o’er with T. W. Higginson makes one quake lest there be a latent flaw which escapes one’s vision.” This was in 1891 or beginning of 1892.

The sly Dickinsonesque humor of (particularly) the opening of Niedecker’s 1931 poem “When Ecstasy Is Inconvenient”:

Heart, be still.
Say there is money but it rusted;
say the time of moon is not right for escape.
It’s the color in the lower sky
too broadly suffused,
or the wind in my tie.

Know amazedly how
often one takes his madness
into his own hands
and keeps it.

Sly humor: Niedecker writing to Zukofsky (LZ’s date: “May 23/48”) regarding the signed epigraph to Zukofsky’s “Light 4”—“These are not my sentiments, / Only sometimes does one feel that intimate. // God, LL. D.”—with a conspiratorial snigger: “God, LL. D. (wish Emily Di. could see that) . . .”

Thomas Bailey Aldrich
called her verses
versicles!
“Miss Dickinson’s versicles
have a queerness and a
quaintness that have stirred
a momentary curiosity in
emotional bosoms. Oblivion
lingers in the immediate
neighborhood.”

2
Mary Jordan:
Her Letters:
E.D. defines genius as
the ignition of the affections,
& it seems likely in her case
to be true.
—
Mary Jordan: quotes her re-
marks to Higginson in 1862:
“I had a terror since Sep-
tember I could tell no one;
and so I sing as the boy
does of the burying ground,
because I am afraid.”
Bliss Carman: “The event of
meeting another was too ex-
quisite and portentous to
be borne. For there are
some natures so shy and

3
quick, so undulled by the
life of the senses, that they
never quite acquire the
easy part of the world. You
will hear of them shunning
the most delightful acquain-
tance, turning a corner
sharply to avoid an en-
counter, hesitating at the very
threshold of welcome, out
of some dim, inherited, instinctive
dread of casual inter-
course.” [likely to be unhappy
if they enter the world’s work—
might end in disaster]. “But
in Emily Dickinson's case,
the stray health of genius
came to the support of this
hermit’s instinct, and pre-

4
served her to the end of life
sweet and blithe and con-
tented in the innocent
nun-like existence in which
she chose to be immured.”
—
Carman:
“she certainly had the most
sensitive and exquisite
organization”
—
Martha Hale Shackford:
“Passionate fortitude was
hers, and this is, and
this is the greatest contribution
her poetry makes to the
reading world. It is not ex-
pressed precisely in single
poems, but rather is present
in all . . .”
—

5
ED: Of someone dull—
“He has the facts, but not
the phosphorescence of
learning”
—
ED: “If I feel physically as
if the top of my head were taken
off, I know that is poetry.”
—
:
Percy Lubbock: “Acute
sensibility of feeling, swift
audacity of mind.”
—

A letter to Kenneth Cox (February 2, 1970) describes her method of research for “Thomas Jefferson”:

My Thomas Jefferson written and sent out. Up very early mornings—nearly killed myself—and all that reading beforehand (until I realized what am I doing?— writing a biography or history?? No, all I could do is fill the subconscious and let it lie and fish up later). The hard part is to keep some quotes but not too many.

Penberthy reports, too, how Niedecker, after reading Charles Anderson’s 1960 Emily Dickinson’s Poetry: Stairway of Surprise, sent Zukofsky “a page of notes.” Included: “[Dickinson’s] poetry came out of language—language the inspiration and creator” and “If the creative writer pushes far enough into language he finds himself in the embrace of thought.”

Putting together A Test of Poetry (1948), Zukofsky refused to pay the $25 required to reprint the intended three poems by Emily Dickinson—“To fill a Gap” (#546), “It was not Saint” (#1092), and “Revolution is the Pod” (#1082). Thus, A Test of Poetry contains only two poems by women: Marianne Moore’s “Poetry” and Lorine Niedecker’s New Goose fragment “There’s a better shine”:

(A third woman, From Ritual to Romance author Jesse L. Weston delivers a translation of the c. 1300 piece Alysoun. Zukofsky, without irony, in a note regarding the poem’s language of Early Middle English: “There is only one surprising difference from modern English: the word he in Alysoun denotes she.”) According to Penberthy, Zukofsky somewhere suggested that “Dickinson’s presence in Niedecker’s poem, ‘There’s a better shine’ would suffice.” 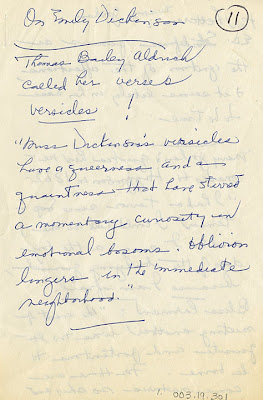