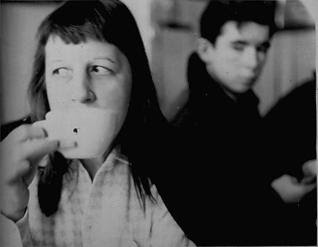 “Night signs off: / a killdeer’s / thin shrieks / tilting its / black pastures.” Sonic construct of the morning: composed with the bicycle cutting through the newly black (daylight shifted) hour, the said killdeer high up and plaintive. Marguerite Young (out of the 1945 essay “The Midwest of Everywhere”): “For me, a plain Middle Westerner, there is no middle way. I am in love with whatever is eccentric, devious, strange, singular, unique, out of this world—and with life as an incalculable, a chaotic thing, meaningful above and beyond the necessary and elemental data of my subject.” And:

I am told by commentators both cynical and wistful, those who have never inhabited my regionless region, that we of the Middle West have no Main Stream, no focus, no elite. “True,” I would answer, “the Middle West, though it may have a hidden Gulf Steam, has no Main Stream because it is oceanic”—that is, touching on all shores and limitless. There are no boundaries I know of. I have seen, on the grassy ocean, many a lurching ancient mariner—and once, in an Indiana cornfield, a dead whale in a boxcar.
I once saw a dwarf driving a team of huge, sweating Percherons. The Middle West breeds, in fact, just such incongruities as dwarfs and Percherons. I once saw a Ford car in which there was an old sow at the steering wheel and fourteen hairless baby pigs as passengers—stalled without gasoline, I have no doubt . . .

“There are no boundaries I know of.” I think of Lorine Niedecker’s lines in the calendar-writ “Next Year or I Fly My Rounds Tempestuous”: “If you circle / the habit of / your meaning, / it’s fact and / no harm / done.” Or, too: “Summer— / I don’t hum / the least of my / resistance, / I give it a fly.” Or: “Van Gogh’s ‘Bar’— / In all free states / the selves un- / mix and walk / the table’s / length.” Or, too: “That’s sweet / on a target— / nobody’d know / the ham line. / Holes are too / late nowa- / days. One / freak ass to / wire.” Marguerite Young, born in Indianapolis in 1908. Lorine Niedecker, born near Fort Atkinson, Wisconsin in 1903. Later in Young’s essay: “Under the veil of routine living and thinking, what uninhibited dramas will never be resolved by any easy formula, ready answer, or slogan! There is no whole, but there are fragments joining and disjoining—a mentality which escapes mentality, a mental reality which escapes our mental description.” Niedecker, in New Goose (1946):

A monster owl
out on the fence
flew away. What
is it the sign
of? The sign of
an owl.

Jenny Penberthy, in the excellent “Notes” to Niedecker’s Collected Works, writes of “A monster owl”:

An early version can be reconstructed from LZ’s letter to LN, March 9, 1938:

A monster owl
out on the fence
flew away. Now
what’s it the sign
of? The sign of
an owl I guess.

Zukofsky’s parings away heighten the piece’s music at speech’s expense, and put the shrug of uncertainty (“I guess”) out the door. The prim preciosity of “What / is it the sign / of?” versus the stretch and half-japery of “Now / what’s it the sign / of?” Loss of the easy flux and ready possibility of “a mental reality which escapes our mental description.” A narrowing, loss of any sense of conversational setting. The piece under Zukofsky’s tutelage become a mere semiotic equation, musically “tight” and rather unhumanly sterile. Certain, bordering smug. Whereas it is doubt—“a raucous comedy in it all”—that defines the Middle West according to Young: “Even our Middle Western humor has been colored by a profound doubt.” Young’s owl story:

Recently, a mammoth hoot owl was seen flying around in different parts of Hoophole Township, New Harmony, Indiana—according to Charlie Chaffin, who operates a thriving notions store and is besides a philosopher, a poet, a historian. Charlie is just naturally what he is—six feet tall in his stocking feet. The owl, according to Charlie, was so large that some of the boys claimed it was equipped with a motor. It had a wingspread of about nine feet, three horns, was covered with a hard shell instead of feathers, carried a four-inch spur on each leg, had round green eyes, made a noise like a flat tire while flying and had a bell around its neck.

(Oddly enough, Young’s “Hoophole” ought to read “Hoop-pole,” a township in Posey County, Indiana named for its pliable saplings used in barrel-making . . .)