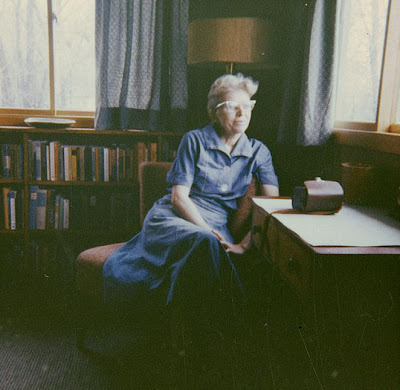 
Out of the 1983 Peter Dent-edited compendium and memorial The Full Note: Lorine Niedecker, Niedecker to Kenneth Cox (23 November 1970), regarding reading aloud for Cid Corman:

At night before Cid left he got out his Cassette (a box that records—not a tape recorder—and then you can play it back) and I was getting very tired and had never read poems aloud to anyone but myself. But he thought I should try so clutching my magnifying glass I tried. I fell over one of the stanzas and nearly squashed it. Two things I did this fall for the first time: shot a can off a post thirty feet from me at the first shot, and read aloud. The reading didn’t go as well as the bullet. I got to thinking as I read how one can write for print and it means one thing and let it out of the mouth and into a listener to become something else e.g.: my Darwin commences:

His holy
slowly
mulled over
matter

from the mouth is it holy or wholly or holey????

And in the Thomas Jefferson I have:

so aloud it calls for a bit of explanation perhaps—e.g. “Patsy, that is” (not spoiling anything really)

but not in defence of myself at all, I really do not approve too much of reading aloud or of listening to someone read. Unless it’s the ballad type of poetry with obvious rhyme and rhythm. For me poetry is a matter of planting it in deep, a filled silence, each person reading it a silence to be filled—he’ll have to come to the poems—both writer and reader—with an ear for all the poems can give and he’ll hear that as Beethoven heard tho deaf. I said this to Basil three years ago when he was here.

That reading turning up some years back, part of a Factory School compilation. The pieces: “Thomas Jefferson,” “The Ballad of Basil,” “Wild Man” (published as “Wilderness”), “Gerard Manley Hopkins” (published as “Otherwise”), “Nursery Rhyme,” “Three Americans,” “Thomas Jefferson Inside,” “Foreclosure,” “His Carpets Flowered,” “Darwin,” and Niedecker’s answer to a Corman-posed query about “making more poems” lately (“the fact that I’m sixty-seven years old . . . and if I’m going to do it some more, I’d better get to it”).

I’ve been preoccupied with the LXIV Catullus of Louie and Celia Zukofsky in the July Poetry. I’ve seen most of the other Cats (Origin, Poetry)—(the book will be out Oct. 3, Grossman, NY) but I think this Cat has more instinctive and intelligent wiles than any of the others. I read it aloud and stumble and get stuck then I read it chanting and pretty soon I get it. Adjectives stand there (adjective sense) like immovable nouns but they actually move as one reads. (There’s no sleeping thru this!) Sometimes there are lines of comparatively limpid beauty.

Pelion could one time prong its top worthy keel in pines
ancestor lugged clear to Neptune in his sea purr on thus
to Phasis what flood tides on the fees of Aeetes,
came elect young ones ace, Argive eye robe awry pubes,
aureate time hoped on there’s Colchis afar to raid pelt home,
asea soon what deep salt sough hit at the careerer poop in
cerulean currents abeyant knees a fir oar palm ease;
Divine Goddess retaining on summits orbs of her fortress
inspired levity made ’t volitant hum flaming wind courier,
pinewood conjoint gains in flexed keel text a careening.
Allow that rude course so primed and imbued Amphitrite then.
Wild sea mull ache rose throe wind tossing prow scudded ichor,
turned on the rowing oar spume wisp in canted wave under,
emerge serry fret the candent way gurgle of welters
a choir who eye moonstruck—Nereides admire Wonders.
I’ll lay that who’ll lay odds we daren’t, lucky marine eyes
mortal ace o cool lease knew that day corporal Nymph eyes
new trick tiniest extant as who gurgled there can know.
T’ my Thetis this Peleus incandesced fair thru his armor,
t’ my Thetis human knows none despised hymeneals,
t’ my Thetis the Father Himself would join them Peleus sense it.
O names that I hope to, sage lore whom time bore then happy
heroes aye salvé, the Gods’ own gens, o benign mothers,
progenies aye salvé to you in turn salvé the benign arm,
voice go so I pay my own voice harmony compel I bōw:
take it how dear your song sings in me tide days felicitous pine torch,
Thessaly aye column man Peleus, you whom Jupiter Himself,
Himself so chose Divine Genitor conceded a marriage.
Did not Thetis twine you what, pool care rim on—Nereus’ heir then?
Did not sublime Tēthys consent that granddaughter nap then,
Okeanos choir marry totalling ample clasp of our orb home?
Wish small o hoped hour infinite time poring look who’s
at their wedding, domain convening all who frequented
Thessaly, a palace there light and the ray of the courted:
donors faring presents, declared in gold and in virtue.
Deserted their Cieros—link once to Phthiotica Tempe,
Crannon is Quiet Homes—and moat and wall of Larissa,
Pharsalian cohort, Pharsalia takes to frequént haunt.
Rural clod is no more, molesting collars yoke no steers,
none humbles or clears his poor garden vine with a rake’s thrusts,
none flails at thinning out fronded tall row or arbors’ umbrage,
none glebe bound prove one old bull dragged earth here and tore it,
squalid a desert's ruby gone in for rust ploughs a rot trees.

Out of the verbiage, the giddy delight of: “what deep salt sough hit at the careerer poop . . .” That, and the lines beginning “Rural clod is no more . . .”