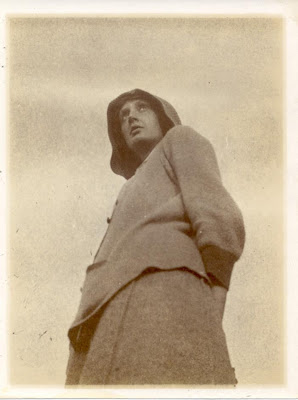 Three days unthinking, trammeled by the roar of a transient’s mayhem. Days of thinking it’s enough: enough adding to the human glut. Desire to pare down, to cease the frenzy of constantly “marring the sweet and simple field with tents”—and next decamping. “Frenyse quhilk bytis his auen membris vitht his techt.” (Against such avid and endless selecting, with its prosaic narrowing, Charles Olson, quoting Whitehead: “Measurement is / most possible throughout the system.” Pursuant to: “I reject nothing. I accept it all . . .”) Reading, in off moments, dilatory and stunned, Virginia Woolf’s novel Orlando: A Biography (1928). Its impious thrashing of the damnable profusions of Victorian “damp”—

. . . for there is no stopping damp; it gets into the inkpot as it gets into the woodwork—sentences swelled, adjectives multiplied, lyrics became epics, and little trifles that had been essays a column long were now encyclopaedias in ten or twenty volumes. But Eusebius Chubb shall be our witness to the effect this all had upon the mind of a sensitive man who could do nothing to stop it. There is a passage towards the end of his memoirs where he describes how, after writing thirty-five folio pages one morning ‘all about nothing’ he screwed the lid of his inkpot and went for a turn in his garden. Soon he found himself involved in the shrubbery. Innumerable leaves creaked and glistened above his head. He seemed to himself “to crush the mould of a million more under his feet.” Thick smoke exuded from a damp bonfire at the end of the garden. He reflected that no fire on earth could ever hope to consume that vast vegetable encumbrance. Wherever he looked, vegetation was rampant. Cucumbers “came scrolloping across the grass to his feet.” Giant cauliflowers towered deck above deck till they rivalled, to his disordered imagination, the elm trees themselves. Hens laid incessantly eggs of no special tint. Then, remembering with a sigh his own fecundity and his poor wife Jane, now in the throes of her fifteenth confinement indoors, how, he asked himself, could he blame the fowls? He looked upwards into the sky. Winter or summer, year in year out, the clouds turned and tumbled, like whales, he pondered, or elephants rather; but no, there was no escaping the simile which was pressed upon him from a thousand airy acres; the whole sky itself as it spread wide above the British Isles was nothing but a vast feather bed; and the undistinguished fecundity of the garden, the bedroom and the henroost was copied there. He went indoors, wrote the passage quoted above, laid his head in a gas oven, and when they found him later he was past revival.

Lovely, that “scrolloping,” apparently Woolf’s own coinage. “Hens laid incessantly eggs of no special tint.” One reads that against the current “era”—its clamorous negligibility. And against one’s own ordinary frets and flourishes. Too, there’s Woolf’s complicated joke regarding the poetry of the commonest verbiage:

. . . it would profit little to write down what they said, for they knew each other so well that they could say anything, which is tantamount to saying nothing, or saying such stupid, prosy things as how to cook an omelette, or where to buy the best boots in London, things which have no lustre taken from their setting, yet are positively of amazing beauty within it. For it has come about, by the wise economy of nature, that our modern spirit can almost dispense with language; the commonest expressions do, since no expressions do; hence the most ordinary conversation is often the most poetic, and the most poetic is precisely that which cannot be written down. For which reasons we leave a great blank here, which must be taken to indicate that the space is filled to repletion.

Followed, assuredly, by a “great blank.”