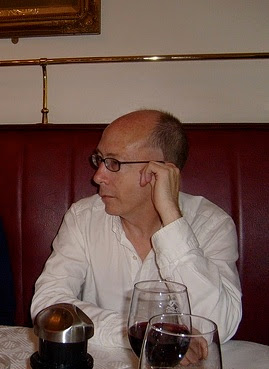 I do not admire Flaubert, yet when I am told that by his own admission all he hoped to accomplish in Salammbô was to “give the impression of the color yellow,” and in Madame Bovary “to do something that would have the color of those mouldy cornices that harbor wood lice,” and that he cared for nothing else, such generally extra-literary preoccupations leave me anything but indifferent.

Exegesis by means of image, explanation carried forth by anecdotage, the offhand “extra-literary” marking style, making argument. Tuma writes: “An anecdotal criticism might be a more poetic criticism.” And: “The thing about the best anecdotal criticism is that it cannot be reduced to method or system. It values style above argument, allows impression equal footing with knowledge.” Tuma’s chief exemplary: Hugh Kenner. (Thumbing a recent book of criticism, George Steiner’s The Poetry of Thought: From Hellenism to Celan (New Directions, 2011), one notes a pervasive language of anecdotage without its storied content: “As early as 1869 the young Mallarmé, in the grip of an epiphanic revelation, sought to break the determinant barriers of language and to liberate syntax from the shopworn linear despotism of logic.” Story of an agon without tangibles . . .) If Kenner (“greatest anecdotalist”—see The Pound Era, whose marvelous texture exposes itself immediately in its opening sentence—“Toward the evening of a gone world, the light of its last summer pouring into a Chelsea street found and suffused the red waistcoat of Henry James, lord of decorum, en promenade, exposing his Boston niece to the tone of things”) offers one model, Tuma, with easygoing confidence, quickly asserts another: he’s looking for something to occupy himself with during a proposed academic leave (2007-8), a doable writing contract of sorts:

I thought the brevity and more or less self-contained nature of the anecdote would allow me to set modest goals for writing during my leave . . . and to stick with them: I’d try to bang out one anecdote at each sitting. It soon occurred to me that it was likely that I didn’t have a sufficient supply of anecdotes, or anyway not of anecdotes I wanted to preserve, to keep me occupied for the whole year. I also thought I would need some way of organizing the anecdotes in a book. So I decided to keep a daybook that would follow the year and allow me to write about some of what was happening during my year on leave, as it happened.

Introducing by retrospect, the way one does. One perennial daybook-style item in Tuma’s book: a lump sum paragraph of recent news details juxtaposed with more personal data, tranche de vie observations, cringe-making puns, &c.—a cross between the collocations of, say, Harper’s “Weekly Review” and the sweeps of Ron Silliman’s The Alphabet:

Cubs off for the day; talk of recession follows talk of housing slump. Gonzales quits. A white bag of finch food hanging out back blows in the wind. One can’t be bewildered forever: eventually you’re just a clod of unknowing. Books and CD pile up as my eyesight and hearing fade—only work can make us happy? The people rage and the heathen imagine a vain thing? It is yourself that is the source of this disgust, though its objects are not of your making. Michael Vick, gone to the dogs, finds Jesus. War criminals run the government. Love endures, incapacitating us. Alice Notley’s book about dead women,Alma, is oversized, awkward to pick up and hold, impossible to read.

Tuma lists Hannah Weiner’s Weeks and Peter Manson’s Adjunct: An Undigest as foreseen prompts: “not daybooks exactly, to be sure, certainly not daybooks much interested in meditative prose, but instead works of experimental writing heavily invested in fact and event.” Finally, though, it’s the unforeseeable that seems to structure On Leave: the unexpected death of Tuma’s mother turns the book to elegy and lament, and throwing its other deaths into starker relief. One reads a detail like that of Notley’s “dead women” differently. One reads of the deaths of Lorenzo Thomas, and Michael Donaghy, and John Wieners, and some different meaning to the word “leave” begins to assert itself. Tuma:

“Dead is dead,” Tom Raworth wrote me once, after the loss of one of his many writer friends. It wasn’t Ed Dorn—someone else. I’m not sure what he meant. Perhaps it was that, with a loved one’s death, and with the possibility of real conversation with that person gone, the books—as it were—are closed. You can write in the book, you continue to write in the book, but it’s not the same. At the same time there is no closure, no end really. Already the tenses blur . . .

If one aim of Tuma’s book of anecdotes—I see I am skinting here, On Leave is filled with anecdotage, terrific and oddly “weighted” glimpses of things, say, the one about Ed Dorn “across the table in a restaurant out on the water in Bar Harbor, talking about yuppies walking their cougars on the devil strips of Boulder,” or the one about Frank Bidart reading a new long poem called “The First Hour of the Night” and running directly to a front-row sitting Richard Howard “to ask him what he thought of it, as if Howard’s is the only opinion in the room that matters”—if one aim is to determine what anecdotage is, and how it informs critical work—I skint, too, if I fail to mention Tuma’s several deft readings of selected works herein, of Rae Armantrout’s, of Raworth’s, of Maurice Scully’s, of John Wilkinson’s—what Tuma arrives at, it, too, seems somewhat “tainted” by the trajectory of Tuma’s year. Toward the end he writes:

I want to say that the anecdote is like the corpse primped up, cotton in its cheeks, fooling nobody it’s true to life. But somehow that seems fake, forced, “literary.” There is little that is or should be literary about the anecdote. Too much self-consciousness about style is as out of place in the genre as analysis and argument. And yet, as Alain Badiou points out in his fine book on Saint Paul, the gospels are mostly anecdotes cobbled together, while Saint Paul’s epistles are something else—militant declarations of a paradigm shift to be recognized by all who would be faithful to the “event.” The anecdote is story, the other manifesto framing story. That seems right, I guess. I am all for story but must admit that, for me, anecdote will never be enough. Anyway there is too little seen here, too little understood, and what is understood was understood too late to be of much use. But there’s always too little time.

Jot and run. Spiel and retreat. Put it all down. Some days I’d argue the “literary” compels itself, is its own unavoidable constraint and obligation. Shapes made without intent. Tuma ends with a story of driving a wet road, and a bird “landing ten yards in front of me in the middle of the road.” Thumped by the car’s underbelly. “Sure enough, the bird is bouncing on its back on the road behind, dead as a nail. You don’t do it over.” Anecdote or manifesto?