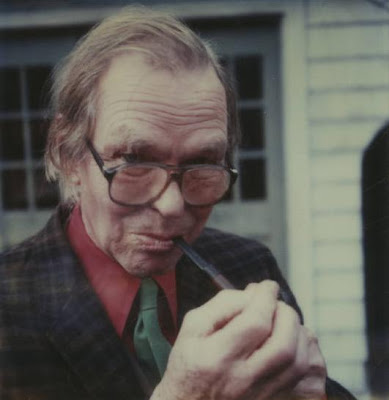 Somewhere in Oscar Wilde’s Picture of Dorian Gray (1890) somebody declares: “To get back one’s youth, one has merely to repeat one’s follies.” That’s what I recall reading Paul Metcalf’s Genoa:

(Pasted to the inside of Melville’s desk, discovered after his death: “Keep true to the dreams of thy youth.”

A line attributed to Friedrich Schiller, and seemingly everywhere in the mid-nineteenth century popular press: The Medical Times & Gazette (1856), The People’s Journal (1847), Howitt’s Journal of Literature and Popular Progress (1847), Hogg’s Weekly Instructor (1852), The New Monthly Magazine (1864) . . . A bromide snuck off and stuck away. Or the ineffably stark “truism” of a poet. Melville d. 1891.

Melville, regarding Mardi, in a letter:

“. . . proceeding in my narrative of facts, I began to feel an incurable distaste for the same; & a longing to plume my pinions for a flight, & felt irked, cramped & fettered by plodding along with dull commonplaces,—So suddenly abandoning the thing altogether, I went to work heart & soul at a romance which is now in fair progress . . .”

(Melville, elsewhere: “. . . since all human affairs are subject to organic disorder, since they are created in and sustained by a sort of half-disciplined chaos, hence he who in great things seeks success must never wait for smooth water, which never was and never will be, but, with what straggling method he can, dash with all his derangements at his object . . .”

Thus the feverish rampancy and upshot of reading Metcalf’s Genoa: A Telling of Wonders (1965)—how it provokes (Latin prōvocāre to call forth, to rouse, to summon) a textual battery of voices. One cannot read anything without seeing its place in a new arrangement. (Recall Metcalf’s keen sense of shaping distinct “particles” at the beginning of the Review of Contemporary Fiction interview: “The poets . . . offered us an opportunity to ‘particularize’—i.e., to break a narrative into its particular parts, and rearrange them according to an original pattern. There is a significant connection between the images from the world of electromagnetics, images used in one case by Pound, and the other by Olson. Pound speaks of the poem as the ‘rose in the steel dust,’ and Olson describes the poem as a thing among things, that must ‘stand on its own feet as, a force, in, the fields of force which surround everyone of us . . .’ Both these images suggest particles in a state of chaos, drawn into shape through an act of imagination, but retaining their character as particles, distinct from one another . . .”) Metcalf sees such weighing (akin to Sidney’s “peizing each syllable of each word by just proportion”) and weighting of a “ballast” of particulars in Moby-Dick (“After a conventional novelistic opening, Melville quickly particularizes, interjecting (between narrative sequences) particles of cetology, the practice of whaling, etc.—‘the ballast of the book,’ as Van Wyck Brooks put it. Has anyone ever made a comparative study of Moby-Dick and Paterson?”) Or, note how Metcalf (Genoa) combines variance, chance, and acuity in one contributory particular deftly plucked out of Pierre:

Melville, as Pierre: “A varied scope of reading, little suspected by his friends, and randomly acquired by a random but lynx-eyed mind . . .; this poured one considerable contributory stream into that bottomless spring of original thought which the occasion and time had caused to burst out in himself.”