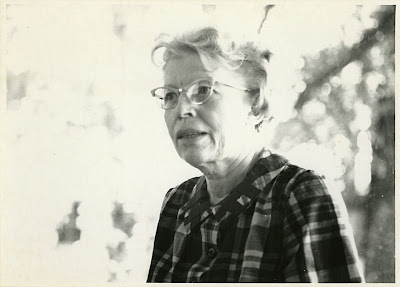 Sun-slashed Sunday. Birds, alerted, working the cheerier registers. (“Woodcock peenting at Legg Park.”) Chores and a too meagre flop-down of reading, interrupted by a nap. Lorine Niedecker writing Gail Roub (20 June 1967), in a late puzzlement and ebullience of style-change, seeking a way beyond the clarity of the merely tangible, form’s radical stasis. Weighing:

how to define a way of writing poetry which is not Imagist nor Objectivist fundamentally nor Surrealism alone [. . .] I loosely called it “reflections” or as I think it over now, reflective, maybe. The basis is direct and clear—what has been seen or heard, etc . . . —but something gets in, overlays all that to make a state of consciousness [ . . .] The visual form is there in the background, and the words convey what the visual form gives off after it’s felt in the mind. A heat that is generated and takes in the whole world of the poem. A light, a motion, inherent in the whole. Not surprising since modern poetry and old poetry if it’s good, proceeds not from one point to the next linearly but in a circle. The tone of the thing. And awareness of everything influencing everything. Early in life I looked back of our buildings to the lake and said, “I am what I am because of all this—I am what is around me—those woods have made me . . . . . .”         I used to feel that I was goofing off unless I held only to the hard, clear image, the thing you could put your hand on but now I dare do this reflection. For instance, Origin will have a narrow, longish poem, sensuous, begins “My life / in water” and ends “of the soft / and serious— / Water”.

That “awareness of everything influencing everything” present in the opening of the “Lake Superior” sequence in North Central:

In blood the minerals
of the rock

Iron the common element of earth
in rocks and freighters

And in the lovely line “Beauty: impurities in the rock”—exchange of “stuff” and diffusory meander the source of it all. That line expanded in a handmade booklet Niedecker put together following a 1966 circle tour of Lake Superior with Al Millen:

Al: “Yes, well, help me read the road signs, they’re so small in Canada—and greenish, they melt into the forest.”

Niedecker’s late nigh-transcendent push sensed in a letter to Zukofsky (“dated by LZ: 2/7/64”): “There is sumpn in moving to a new place and now when I go back home this summer maybe it will seem new to me. I’m trembling on the verge of something, a form of poetic thinking that depends maybe too much on readers’ imagination but we’ll see. I don’t know if it’s called metaphysical or not, not necessarily, I guess, but anyhow this has been in me from the beginning and somehow it’s got to come out.” Or see the 15 December 1966 letter to Cid Corman, reveling in mystery and ambivalence:

Am I the American indeed—I can’t be entirely content, it seems, without some puzzlement, some sharpness, a bit a bit of word-play, a kind of rhythm and music in however small a way (all this only leads me into confusion, no doubt).

And she proceeds to recount how she’s lately sensed “something like subliminals coming on—dream, mind at rest, automatic writing etc. . . . reverting to my youth (my interest in the 1930’s) so I let it come! I love it but the spring is not quite so fresh and jet-fast as it was back then and you keep wondering if this pristine stuff is complete—funny thing, tho, when you get used to it, it does seem to be enough. Perhaps by spring I’ll have something—don’t count on it—” Gorgeously vacillatory. Isn’t it in the pieces of “Subliminal” (out of Harpsichord & Salt Fish) that one sees the kind of quizzical fracturing and intersplice of memory and presence (often in the form of lingual retrievings) that Rae Armantrout works so consistently now?

Sleep’s dream
the nerve-flash in the blood

The sense
of what’s seen

“I took cold
on my nerves”—my mother

Soon I rise
to give the universe
my flicks

As Niedecker puts it in the epigraph to “Traces of Living Things”—quoting Fulcrum Press’s Stuart Montgomery, the fragments offer a “strange feeling of sequence.” (“Traces of Living Things” is full of transcendent (category-defying) insistence, that light “inherent in the whole”: “A man // bends to inspect / a shell / Himself // part coral / and mud / clam”.) 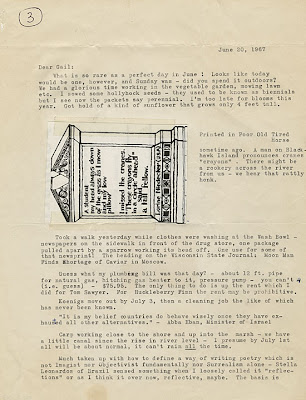 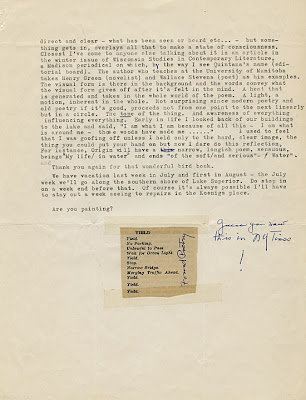