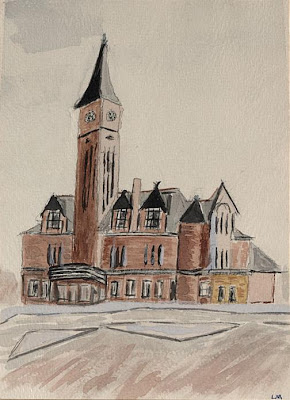 A seemingly ephemeral piece* by Jonathan Williams (out of The Full Note: Lorine Niedecker):

Misericord (2)
virago
in a barrow

Misericord (3)
hammering a wedge
to split
a hedge-stake

a horse
walks behind

Misericord (5)
what
no doubt
was a hawk

A lovely word misericord, meaning pity, and dagger (the one used for final dispatch, the coup de grâce—Caxton says, “Mysericorde or knyf with a crosse is gyuen to a knyght to thende that yf his other armures faylle hym that he haue recours to the myserycorde or daggar”), and room (in a monastery, wherein reprieve of the rule is permitted), and mercy seat (or its carvings). “A wooden shelf on the underside of a hinged seat in a choir stall providing, when turned up, some degree of comfort to a person standing in the stall during periods of prayer.” Also: “detailed, often bawdy, carvings of scenes of daily life medieval misericords were frequently furnished with.” (Williams’s sense.) That unending desire to furnish any blank, to stock what’s unstocked. In a letter dated 4 March 1964 to Williams (who records it in a daybook), Niedecker writes:

Forgive the pictures. They are a housewife’s, a retired poet’s, a mere dabbling in school kids’ paints. A sudden fierce desire to paint everything I love—if it has simple lines and much color. But it’s likely, isn’t it, that every poet feels a great desire to paint, no matter how primitively. You can write about a thing with great excitement akin to ecstasy, but paint, that takes love. Then too, it appeases my desire to possess things. But this, the desire to possess, has been leaving me anyhow. Marriage, however, brings with it the house, the kitchen stove, the living room furnishings, the land, a flower, the evergreen tree which Cid Corman suggests we should have to live on a little beyond us.

Lorine Niedecker died on 31 December 1970. She had lived her life by river and lakeside in Wisconsin, far from literary cenacles, gossip and gadgetry (no, I don’t have a tape-recorder and don’t know of anyone within a couple of hundred miles who does), attentive to weather, family, meals, chores, boats, water, and the people about her (the folks from whom all poetry flows / and dreadfully much else). She got up early to read, maintained an extensive correspondence and was interested to the end in examples of extreme technique . . . Her poems, physical in feel to a point that calls for terms applied to food: tender, tart, tough, use word and intonation with such subtlety and concentration they unfold details of existence, after who can tell what discouragement, to a deep stillness. For me poetry is a matter of planting it in deep, a filled silence, each person reading it a silence to be filled.

(Oddly enough, in Williams’s daybook, that entry precedes one quoting a letter by the Vicar of Beverley regarding misericords: “There is no modern book on the misericords of the Minster. The only complete work is called The Misereres of Beverley Minster, by T. T. Wildridge, 1879. This is out of print, of course, but can be seen in the Reference Department of Beverley Borough Library: so it looks as though you will have to make a pilgrimage here to see it. The misericords may be lifted for inspection. The vergers tremble because careless visitors (of whom there are many) then promptly drop them heavily, which does not improve the hinges.”)

she seined words
as others stars
or carp

laconic as
a pebble
in the Rock River

along the bank
where the peony flowers
fall

her tall friend
the pine tree is
still there

** Earth Ship apparently originated in Southampton, England, lasted for thirteen numbers (1970-72), and continued (1973-76) under the name The Ear in a Wheatfield. A note in the catalogue record for The Ear in a Wheatfield reads: “Each issue has a different cover title. / Editor: Kris Hemensley.” One of the other “three . . . who died” is Stevie Smith. Cox: “Our own Stevie Smith, an English eccentric, ridiculous and terrifying, aunt and prophetess, her voice between giggle and scream cracking the provincial vicarage, declaring again and again: There is no formula for poetry, no school, no authority, nothing but the spirit that moves and the wit and the nerve to give it utterance.” (Quoted in Sanford Sternlicht’s 1991 In Search of Stevie Smith.) One’d love to see the whole of Cox’s piece (damn the difficulty of procuring serials through interlibrary loan). 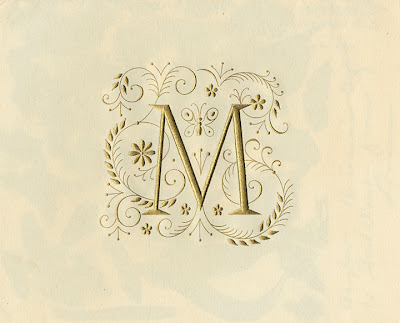 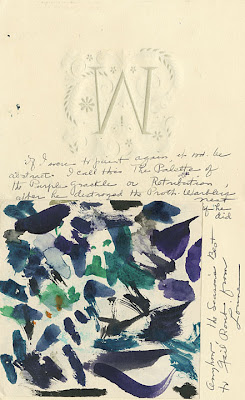 Lorine Niedecker’s note to Gail Roub: “if I were to paint again, it wd. be abstract. I call this The Palette of the Purple Grackle or Retribution, after he destroyed the Proth. Warbler’s nest if he did.”
(Hoard Historical Museum, Gail Roub Collection)