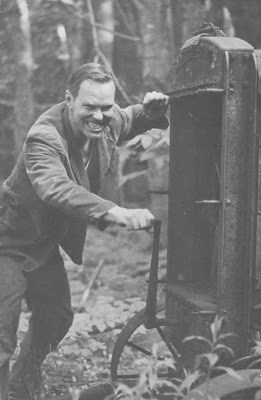 Among the initial pages of Paul Metcalf’s Will West (1956), a warning, rebuke, premonitory dare, and acceptance:

It is those of us who cannot untangle ourselves from the past that are really dangerous in the present because we are only partly here our eyes are blind because our appetites are turned inward or backward chewing on the cold remnants of our inheritance of our facts of our history to try to find who we are what we are where we came from what is the ground we stand on to whom does it belong and did it belong. We are dangerous because when we come out of the past we are rich with its energies and poorly experienced in the business of daily living and we hurl ourselves across the present with the blind fierceness of a martyr or a convert defending our damage to the defenseless with a language they cannot understand a language created from false concepts of time of history of past present and future. In the end we will bring to the world nothing useful and although we may find what we have been and even what we are nevertheless for all our search the heavy helpless stumbling of men born in quicksand we will never know what we have done.

Metcalf, in a squib titled “Coca-Cola: It’s the R-E-A-L Thing” in Lillabulero #12 calls the paragraph “a negative, a set of danger signals attached to a kind of involvement that is quite clearly (and implicitly, from the rest of the book) tempting the hell out of me. I am like a kid about to jab the H needle into his vein for the first time, remembering all the warnings.” Metcalf’s phrase, repeatedly, is involvement with history, “involve” turning down out of the Latin involvĕre to roll into, to wrap up, to surround, to entangle, and with some revelatory leanings in its usage—“Anone fro benethe, lyke as the grownde hadde be broken, ther brake vppe a flame of fier that inuoluyd hem . . .” Metcalf: “In a way, this whole process—my involvement with history, which is what all my books are about—is like a prism, with refractions at different angles—and the appearance varies with the angle and light.” And: “History and life for me are not altogether holding actions . . . They fluctuate, in intensity and rhythm, or give off widely different, almost mutually exclusive lights, prismatically. Perhaps, one of these days, I will begin to churn again. Or perhaps I will drift into an absolute calm. Either state, it seems to me, might have a claim to validity.”

Out of an undated Metcalf essay called, punningly, “Totem Paul: A Self-Review” in Where Do You Put the Horse?” (1986):

Studying a complex totem pole, one can see how the various figures, and the tales they represent, bear upon one another: the claws of the raven are on the back of the beaver, etc. I realized that I was dealing here with an unusual hybrid form, generally, works of art fall into one of two categories, those that may be taken in at once, like a painting or a sculpture, and those that require time for their reception, such as a symphony, a play, or a book. A totem pole combines both conditions: one can see it at a glance, or one can read it like a book, the chapters merging, top to bottom, or bottom to top. And to describe this mix, I have come up with the term, “The Narrative Hieroglyph.”

*       *       *
. . . I think all of my books, individually and collectively, may be called “narrative hieroglyphs.” True, unlike a totem pole, a book may not be taken in at a glance; it requires time to read. But a totem pole, as I have said, may be read like a book. And the effect of one of my books—which I have commissioned myself to carve, to record the “histories” of our “tribes”—the effect is one of the various elements or “figures,” in a line sequence, each perched upon the back of its predecessor. In the past I have used terms such as “mosaic” or “collage”; but the totem pole, with its tribal, historic sequence and organic juxtapositions, is a much more powerful analog.*

Metcalf’s furiously writing body—out of “The Creative Process” (1984) (“Choice of the daunting title for this essay is deliberate . . . and I am fully aware that this title will cause many a reader to skip on by or at least begin reading with an unconscious negative bias”)—poses its gritty exertion, velocity, and thralldom against the usual “seemingly endless freshet of mystical nonsense”: “few of us who write or paint or compose . . . know what the hell it is we’re doing. In general, if we’re any good at what we do, we’re moving too fast, too much in thrall to our obsession, our muse, our daemon, to be intelligently aware of process . . .” See, too, “Butting Heads with the Transcendentalists” (1977):

Answer a question not with an answer, nor with a question, but with an unthinking, demanding physical activity.
That too is a philosophy—mens sana in corpore sano—but I don’t view it as such: I view it as the Head blotted out, at least for a time, in the sweat of the Body (and that, too, is a false dichotomy, Head and Body: the two are one).
The head ignites, produces its illuminations, and then reburies, not just questioning itself, but incarcerating, risking itself, totally.
. . . I find myself thrown back, or throwing myself back, into pre-thought, into plain experience. Which is why I dismiss Emerson—and am suspicious of Thoreau (I don’t believe in transcending anything)—the Head will always rise, the world is full of Heads—what’s difficult is the Body: Whitman’s persistent lists, Melville’s cetological details . . . it’s difficult to hold onto that, to persist in that, when the Head wants to talk—as, God knows, it always does.

Head and Body, noun and verb. Out of the 1983 “The Scene” (“Being a gathering and a ripping apart, brimming with bile and bias, spleen and prejudice, and offering, at the very end, a glimmer of hope”):

I would suggest that Europe is the land of nouns. The nearest concession to a verb a true European will make is at best intransitive, grudging. As in Samuel Beckett: “I can’t go on. I go on.” And Beckett, when asked why he wrote in French, replied, “Because French is the most beautiful language in which to say absolutely nothing.” And Meridel LeSueur, that grand octogenarian lady of the midwestern American Left—whose name but nothing else may be French—has recently said, “I’m doing away with the noun now. The noun is a capitalist invention.”

* Metcalf clearly sees his writing (particularly the “narrative hieroglyphs”), too, as being a form of salvage and reuse:

David Kadlec, in an unpublished essay, describes the theory of bricolage, as developed by the French anthropologist, Claude Lévi-Strauss: “Bricolage is distinguished from the work of the craftsman insofar as the materials used are those salvaged from the wreckage of previous constructions rather than materials designed specifically for the task at hand. Lévi-Strauss views mythical thought, which draws from an extensive but limited repertoire, as a kind of intellectual bricolage. New myths can be wrought exclusively from the fragments of old ones.”
Fragments of old myths, old voices, are caught up as they float to the surface. Original meanings may be lost or incomprehensible or conceived only in the abstract. But carefully and patiently put together in new relationships and in a current context, they are charged with new force.