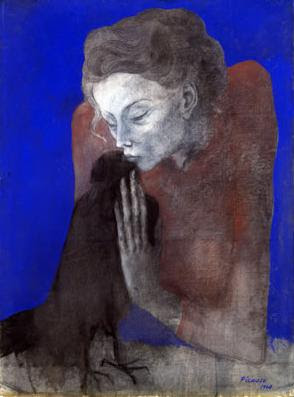 Weekend of attending’s brunt dispersal in busyness, that via negativa. (“We learn to prefer imperfect theories, and sentences which contain glimpses of truth, to digested systems . . .”) I do recall, walking the dog late Saturday night, a screech owl’s repeated soft whuttering up in a Norway spruce. That, and, yesterday, examining Picasso’s Femme au corbeau in the Toledo Art Museum, its hunch and merger, the way the woman’s pursed indifference wars with the angularity of her stance . . . The way the brilliant blue surround makes its own shape recalls another moment, leafing through John Szarkowski’s 1973 Looking at Photographs and seeing Timothy H. O’Sullivan’s “Black Cañon, Colorado River,” the white purity of its apparently cloudless sky. Szarkowski points to the technology: how the implacable luminosity is the result of method and means, the wet photographic plate’s over-sensitivity to blue light: “sky areas were thus automatically overexposed, and rendered as blank white.” (Admittedly, without the lit-up humped back of the man in the boat, I would not cotton so to that flat puzzle piece of sky, the man’s seeming burden and comfort. Landscape revealed by means of the “human position” . . .) I think again of Niedecker’s “Lake Superior”—its sense of man’s worldly adherency and belonging

Inland then
beside the great granite
gneiss and the schists

to the redolent pondy lakes’
lilies, flag and Indian reed
“through which we successfully
passed”

Why should we hurry
Home

Is Niedecker’s line a sly counter to Emily Dickinson’s presumed final note (c. 1886, to cousins Louise and Frances Norcross): “Little Cousins, / Called Back. / Emily”—a way of suggesting “Back” is emphatically here? (Probably not.) 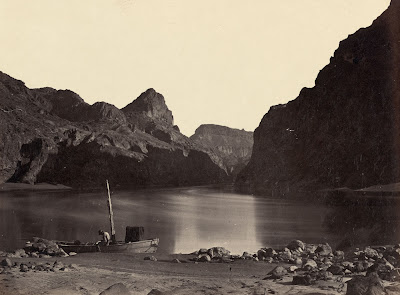