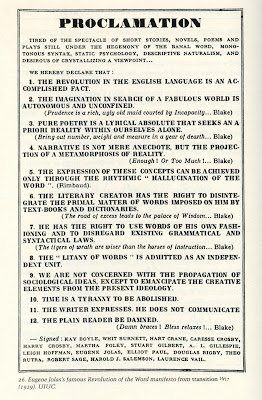 Fatigue. Incipient sloth. Snow, again, minimally festooning the streets. “Up” at four thirty to inspecific anxiety and restlessness. Zukofsky: “Condensation is more than half of composition. . . .” My cutting out work thus cut out for me, who’s voluble as a goose. Or I could hereby load my brushes with significantly less paint . . . Thinking of how Stevens, “bawd of euphony,” quotes—in “The Figure of the Youth as Virile Poet” (1944)—William James’s letter to Bergson regarding some Bergson book or other: “You may be amused at the comparison, but in finishing it I found the same after-taste remaining as after finishing Madame Bovary, such a flavor of persistent euphony.” The ramped-up synaesthesia covering unintelligibility or something vasty and indifferent like remorse? Music the procuress of what’s available by no other means. In a letter to Williams (12 July 1962) thanking him for “the hand-attested copy of” Pictures from Brueghel Kenneth Burke quotes himself (out of a story called “Prince Llan”*)—“Ampersand placing the germs into the blood through the sucking of lice not affable skulls whom the madam lay with the man so aloof from us as he stood on stiles that passing dogs stopped to befoul them”—with the comment: “But after that effort, I collapsed.” Burke is using the syntactical plasticity of the sentence to point admiringly to the logic-thwarting ending of Williams’s “The Corn Harvest”:

resting
center of
their workaday world

“He does not share” goes first of all with “shade,” then shades off indeterminately into “the resting center.” The more closely you watch such, the more it maketh to be dizzy.

And, looking hard at early work of Lorine Niedecker, I nearly lament the loss of that moment of James Joyce seizing the hinterlands of America, gussying up the native (pre-commodity) surreal (though Niedecker is likely reading—through Zukofsky—the Eugene Jolas-edited transition with its “work in progress” Finnegans Wake excerpts and 1929 “Proclamation on the Revolution of the Word”). The end of the seven-part “Progression”:

To jesticulate in the rainacular or novembrood
in the sunconscious . . . as though there were fs
and no ings, freighter of geese without wings.
I know an ill for closing in, a detriment to tie-ups.
They pop practical in a greyfold, bibbler and dub—
one atmospheric pressure for the thick of us.
Hurry, godunk, we have an effort to wilt.
I shall put everything away, some day,
get me a murmurous contention, and rest.

Circa 1933. Niedecker, writing to Harriet Monroe (31 January 1933): “Poetry to have greatest reason for existing must be illogical. An idea, a rumination such as more or less constantly roams the mind, meets external object or situation by illogical association. Memory, if made up of objects at all, retains those objects which were at the time of first perception and still are the most strikingly unrecognizable. In my own experience sentences have appeared full-blown in the first moments of waking from sleep. It is a system of thought replacements, the most remote the most significant or irrational; a thousand variations of the basic tension; an attempt at not hard clear images but absorption of these. Intelligibility or reader’s recognition of sincerity of force lies in a sense of basic color, sound, rhythm.” Some pertinent “points” out of Jolas’s “Proclamation”:

6. THE LITERARY CREATOR HAS THE RIGHT TO DISINTEGRATE THE PRIMAL MATTER OF WORDS IMPOSED ON HIM BY THE TEXT-BOOKS AND DICTIONARIES.

(The road of excess leads to the palace of Wisdom . . . Blake)

7. HE HAS THE RIGHT TO USE WORDS OF HIS OWN FASHIONING AND TO DISREGARD EXISTING GRAMMATICAL AND SYNTACTICAL LAWS.

(The tigers of wrath are wiser than the horses of instruction . . . Blake)

8. THE “LITANY OF WORDS” IS ADMITTED AS AN INDEPENDEDNT UNIT.

*The 1924 printing of “Prince Llan” in the Harold Loeb and Alfred Kreymborg-edited little magazine Broom resulted in the issue’s seizure by the U. S. postal service for obscenity. Burke’s story contained the word “breasts”: “Their breasts were tight up beneath their shoulders. Their breasts, they stood out firm like pegs.”