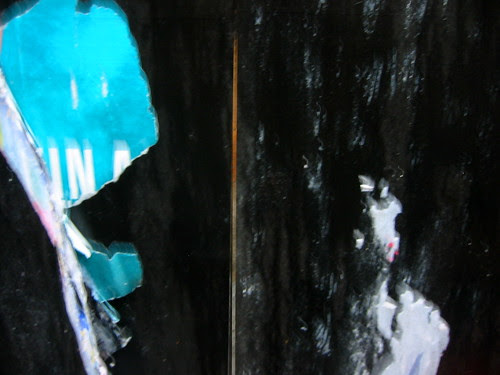 The “radical novelty” of a quasi-lineated sentence’s being label’d a poem:

The after-black lies low along the hills
Like the trailed smoke of a steamer.

That’s by T. E. Hulme, found by a biographer in a notebook. Hugh Kenner (in A Sinking Island: The Modern English Writers): “To call it a poem would have been preposterous as late as 1910.” That’s a mere one hundred years “back.” So that: “today” (in Rod Smith’s 1999 Protective Immediacy) one’s capable of reading an unlineated line like

without “merely” rooting for the new. (There is, too, the sidelong bet that the “poetic” resides in something else: the “after-black,” the skew’d size differential. Smith writes, too:

One goes “off”—one is liable to return to the “era” of irony’s invert’d commas at the present breakneck speed—and comes back to a slithery indifference: the mark-up machine nearly broke down. (Patrick Swift call’d painting “making marks.” And, in a sensationally apt formula of the modest necessary (the everyday), claim’d:

My paintings are merely signs that the activity was engaged in.

(Sideline tenet: “To paint even a bottle is dramatic. A leaf will do.”) I ought provide the stunning context of the prior line—applicable to each presumptuous screechy innovatrix amongst “us”:

It is not possible to be modern, that luxury was taken away from us years ago. The nature of the catastrophe is such that rhetorical images are superfluous in the awful days we are required to live through. Not to paint is the highest ambition of the painter but God who gives the gift requires that it be honoured. It is in the gesture that it lives. There is no escape. Picturemaking is ludicrous in the light of the awful times we must endure. It is sufficient to contemplate the nature of composition to see that the picture itself is impossible. Each square inch of Titian contains the whole pointless—between the cradle and the grave. My paintings are merely signs that the activity was engaged in.

And, applicable, too, Swift’s precautionary klaxons and alarums against the onslaught of the abstract (beyond its occasional use for shackle-shrug-off, a hand up out of whatever rut academickal or unroof’d one’s descend’d down into): “It will cut the artist off from life, and leave him for subject only his own plastic methods, he will become a ‘connoisseur of his own tricks.’ He becomes a purveyor of boredom under the name of pure art.” Compare William Carlos Williams’s outburst mid-Yes, Mrs. Williams, that montage of (literal) Muttersprache:

I like Chopin because he was honest and good and he was a genius and he could play the profound, and tremendous states of being cannot exist here—that is the ultimate felicities of understanding, we rise to our occasions like starved trout to a flake of tobacco leaf, therefore, our staccato verse and fragmentary prose. To stay on a point or a plane is huge work not possible when one is inevitably opposed by many, the one must go down the scale to succeed or be content to touch understanding only by flashes. Mammie look at the little flowers they are growing. The greater swallows the rest: If my legs were tougher I’d play baseball tomorrow which proves that muscles are of no importance, but that weakness is excessively to the point. He did not know it, but he was born to be smothered in ammonia. I’ll bend the God damned parallels until they meet O elm before their bedroom windows blossoming.

Therein lies a refusal to conceal the unknown, the unchart’d, indifferently under a label. (Compare the ancient ruse of the lying cartographer: masking ignorance with a fine and belabouredly engraved cartouche—say, that compass rose and titling smack dab covering the marvels of the American hinterlands. We, too, witness “our” lying cartographers with the etiquettes jaunes. Shhhh.)

Out and about: I heard a man say, in all seriousness, that something “never hit that sweet spot story-wise”—and nearly disgorg’d my bagel. I read, interruptedly, with desultory impetus, Williams’s 1928 A Voyage to Pagany. Williams (seeing men in Italy tying up grapes with willow withes): “Always do the same thing, year after year. That’s work, work is worship.” (Cf. Patrick Swift: “To know what it is to look at things, life as a prayer, a mass, a celebration.” ) And (Williams along the Arno): “If I were a peasant the river wouldn’t look so poetic, but it would look more god-like, more real. . . . You must begin with nothing, like a river in the morning and make, make new. . . . I make my way out of nothing using what I find by chance.” “Took,” too, in my meagre travels, by a painting by Honoré Sharrer, who, too, made of work itself a totemic quasi-religious thing. See her alterpiece-style triptych “Tribute to the American Working People.” That and that, and un tas de choses undigest’d, lying low in the after-black . . . 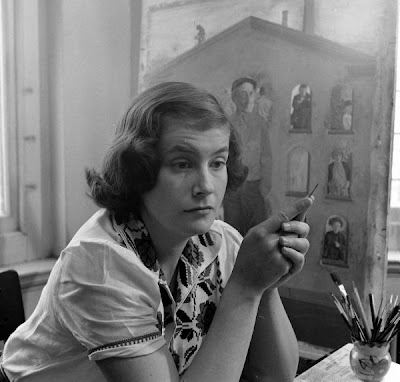 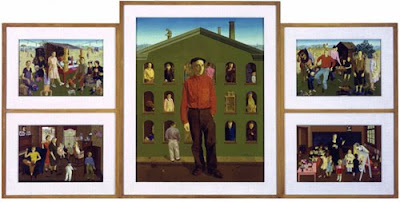 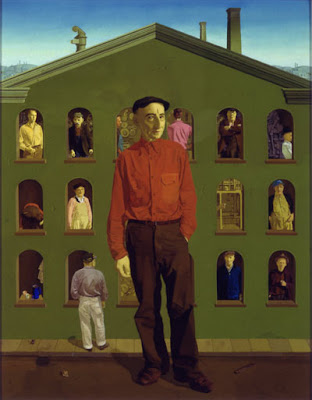 Honoré Sharrer, Detail of “Tribute to the American Working People,” 1947-1951