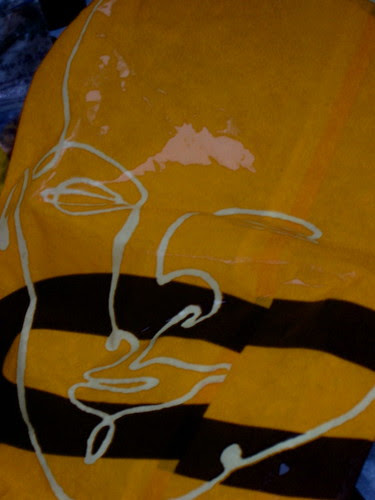 Morning’s prithee-scorning need to attach itself (“invading”) to the first object it encounters, and truss it up. Whatever moves, grab it. Today, something of Ted Berrigan’s (out of The Sonnets):

It is night. You are asleep. And beautiful tears
Have blossomed in my eyes. Guillaume Apollinaire is dead.
The big green day today is singing to itself
A vast orange library of dreams, dreams
Dressed in newspaper, wan as pale thighs
Making vast apple strides towards “The Poems.”
“The Poems” is not a dream. It is night. You
Are asleep. Vast orange libraries of dreams
Stir inside “The Poems.” On the dirt-covered ground
Crystal tears drench the ground. Vast orange dreams
Are unclenched. It is night. Songs have blossomed
In the pale crystal library of tears. You
Are asleep. A lovely light is singing to itself,
In “The Poems,” in my eyes, in the line, “Guillaume
Apollinaire is dead.”

A thing that—amazingly, for such a short piece, a miniature of what The Sonnets do, slinging out repetitions with no sense of irony or effort (or artifice, a slightly bemused shrug-off tone thwarts the possible preciosity)—unclenches its own history as it goes, and drenches itself in it. Suppose one were to “apply” these lines of Auden’s (out of the unfinish’d The Prolific and the Devourer) to it?

“What are beyond those hills? More hills.”
Paradise is a state of harmony of understanding. We are always entering paradise but only for a moment, for in the instant of achieving a harmony we become aware that the whole which had previously seemed the limit of our consciousness is in its turn part of a larger whole and that there is a new disharmony to be reconciled.
This awareness that paradise must be continually lost, that if we try to remain in it Paradise will turn into Hell, is the pain of Purgatory, La nostalgie des adieux.

Odd semantickal careering out of control: one detects nostalgie de la boue sonically grunting under the godly tympanum of that nostalgie des adieux, mud and God, another speculum (or lens) for seeing how Paradise and Hell differ little, though the road betwixt (disharmony, that process, unreconciled) go “burning with nonchalance” along. (“What are beyond those hills?” is, Gallic évidemment insert’d, the exploratory stance of the mid-sentence writer—the leg swinging out in the big green day’s air like a sack of trout only to bump against the “dirt-covered ground,” that boue, allowing the other leg its lift-off and trajectory.) Auden (The Orators): “Continuity is that the existence of a whole results from the sum of its parts. Discontinuity is that its nature cannot be inferred from theirs. The enemy’s two ways of attack.”

Second movement. Memories of navigating c. 1972 a behemoth of a bald-tire’d Ford wagon up to the summit of Clingman’s Dome in the Smokies, mid spring blizzard: definition of “What are beyond those hills? More hills.” Memories of a snub-nosed revolver of a neurologist (surround’d by a laconic, gawky gang of neurology sub-docs) striding into my post-stroke room and—obviously pleased with himself—asking if I were capable of repeating: “Round the rampant rugged rocks / Rude and ragged rascals run.” (I reply’d, “You mean the Auden line?” and hardly succeed’d in marring the Roscoe’s bluing.) Is it the rolling thunder of the r’s that cause me to recall one British surrealist, Roger Roughton, a sort of Charles Bernstein of the day, another who (like Auden pre-Prolific and the Devourer) so desperately want’d to believe verbal inanity itself had a political role that he wrote things like: “Surrealist work, while not calling directly for revolutionary intervention, can be classed as revolutionary in so far as it can break down irrational bourgeois-taught prejudices, thus preparing the mental ground for positive revolutionary thought and action.” Stepped up a notch to syntactical “tactics,” all too familiar.

Auden’s title’s out of Blake (“The Marriage of Heaven and Hell”):

Thus one portion of being, is the Prolific. the other, the Devouring: to the devourer it seems as if the producer was in his chains, but it is not so, he only takes portions of existence and fancies that the whole.
But the Prolific would cease to be Prolific unless the Devourer, as a sea received the excess of his delights.

Plowing about the Blake (third movement), one snares, too: “The cistern contains: the fountain overflows / One thought. fills immensity. / Always be ready to speak your mind, and a base man will avoid you.” (That avoidance, here in the present “low dishonest decade,” is unmistakably evident—and galling—in the power-silence tactic adopt’d by the various high-ranking former grunts. See, too, Blake’s “The tygers of wrath are wiser than the horses of instruction.”) What is striking in the Blake though is how the lovely “One thought. fills immensity” recalls in sly reverse Giuseppe Ungaretti’s floody miniature “Mattina”: “M’illumino / d’immenso.” Blake’s happy insolence is to make the word itself (“thought”) the incendiary device: the song is what brings the sun up and clocks the universe, kapow! Worth the remembering, too—that Ted Berrigan did up a version of the Ungaretti piece that he titled “Matinee”:

Morning
(ripped out of my mind again!)

Atypique, a scherzo for the fourth. Early, in 1836, John Stuart Mill is saying: “Books, of any solidity, are almost gone by.” (In Kenner’s A Sinking Island, the book, solid enough, I found myself reading yesterday in lieu of the “assign’d” Grand Piano.) Talk therein of the minuscule and popular penny press (Tit-Bits, The Strand Magazine) stories and “Inquiry Column” pieces—“Has a duel on bicycles ever taken place?” Answer: “(Not long ago, in Spain, between Señores Moreno and Perez; “and it ended fatally for the latter.” The weapons were knives.)”—recalls (“low dishonest decade” redux) nothing so much as today’s nigh-substanceless tooters and networkers. Bah. “Guillaume Apollinaire is dead.” 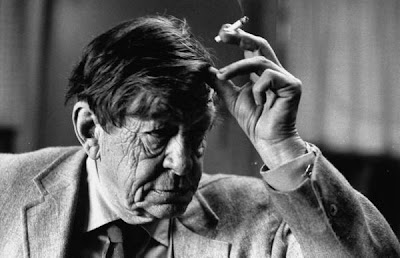