“Not inextricable in any sort of statement of itself . . .”

Oh, grubby-finger’d Time—that fidgety kid—’s push’d an index up into its nostril and sneezed forth a high-pressure nasal wind, dislodging a tiny ficus of snot. (That’s no way to begin.) (I am talking to myself.) Work undone is work undone: one finds oneself in the morning light with light making havoc of one’s hands. Here’s a 1988 sentence by Henry James (Hugh Kenner notes how it—tiny ficus—“somehow splats down with the word ‘dullness’”):

Art lives upon discussion, upon experiment, upon curiosity, upon variety of attempt, upon the exchange of views and the comparison of standpoints; and there is a presumption that those times when no one has anything particular to say about it, and has no reason to give for practice or preference, though they may be times of honor, are not times of development—are times, possibly even, a little of dullness.

“Possibly even.” In the same book (The Elsewhere Community), Kenner tells a story he’d related, too, in the “Preface” to The Poetry of Ezra Pound, a story of a similar digital emunction, projectile land where it will:

The Bollingen fuss appalled me. What was chiefly appalling was that the United States literati, including the distinguished jurors who’d awarded the prize, were all busy defending the integrity of the awards process. No one at all was defending Pound. Supposing I had nothing to lose, and in fact too naïve to realize I was risking my entire future, I decided that if no one would speak up for him, I would.
In the summer of 1948, on a picnic table overlooking Lake Chemong near Peterborough, on a little borrowed Corona portable typewriter that lacked a right-hand margin stop, I put in six-hour workdays, mid-July through August. I fetched books from the University of Toronto library ninety miles away—books I needed, because, as it turned out, the best guide to Pond’s poetry was his prose, a fact that seemed not to have been noticed before. The result was the 308 typed pages of The Poetry of Ezra Pound, published in 1951 by Pound’s British publisher and also his American one.

Is it the “picnic table” there that thrills me so? (In The Poetry of Ezra Pound it’s “a trestle table under pines.” There’s, too, the lovely workmanlike detail: “Using a system I’d picked up from Marshall [McLuhan, with whom Kenner’d visit’d Pound at St. Elizabeths], I gisted quotation onto little slips, let their affinities prompt the pile they went into, and derived chapters from the piles.” (To gist: to parcel out cattle to pasture “at so much per head.”) Et puis, by the grand hazardry of the fell library—its way of provender accordant to one’s industry: Edward Dahlberg to Charles Olson (dedicatory) in Can These Bones Live:

My dear Charles: Literature, we know, is the art of ripening ourselves by conversation; and originality is but high-born stealth. How much of our talks have yeasted and bloomed this little Herman Melville loaf; and how I have played the cutpurse Autolycus, making my thefts as invisible as possible, you and my blushes best know. But here is my hand with Mephistopheles’ orison: When your own polestar Truths surge upon the whited page, may “God’s Spies” put the same vermilion Guilt upon your face!

Conversation. That’s Dahlberg c. 1940. In Olson’s 1947 Call Me Ishmael, there’s a Dahlberg reference: “Melville’s reading is a gauge of him, at all points of his life. He was a skald, and knew how to appropriate the work of others. He read to write. Highborn stealth, Edward Dahlberg calls originality, the act of a cut purse Autolycus who makes his thefts as invisible as possible. Melville’s books batten on other men’s books.” (Autolycus: skill’d in thievery and song, “surpass’d men in theft and oath.”) Isn’t Dahlberg admitting a kind of yeasty complicity—mutual Autolycus choruses—in the Melville talk? Olson, though, transforms the remark to Melville’s own sonorous thievery. Hiding, the “hid,” the illicit, the borrow’d—it’s all through Dahlberg’s own American saturnalia (in the chapter “Woman,” section “‘I Was Naked; and I Hid’”):

From the Old Testament the Hebraical Puritan took a garbled Jahweh, added to it an inclement, Atlantic Christ and a Devil, and of these made witchcraft New England—the allegory of Adam, Eve, the Serpent and Cotton Mather. Satan’s Bible, Cotton Mather’s Wonders of the Invisible World, was the fountainhead of Puritan diabolism . . .
All of the Puritan fantasies were unholy, libidinous quests for the wonders of the invisible world, the wicked spermaceti, the sexual Scarlet Letter. Hid within the carnal-hued Letter was the concupiscent wonder of the Privy Teat, escutcheon of Cotton Mather’s witch.
. . . Melville shaped an antichrist Ahab, who roamed blasphemous, upboiling seas in pursuit of a Mephisto-Lamb, Moby Dick. Ahab spat into the sacramental silver calabash, uttering in final profanation a mock Lord’s Prayer in Latin:

Melville broiled in ejaculatory blasphemies; of Ezekiel’s Vision and Cotton Maher’s Shade, he composed spermaceti Angels; of a Satanic brute, Moby Dick, he made a leering monstrance, transubstantiating creamy foams and breakers of brit and squid. Leviathan’s Mead, into a wine and wafer supper.
Yet none could speak: Hawthorne could scarce mention carnal embrace; Poe had uttered in vain, “And Sorrow shall be no more, and Eros all”; Melville made vasty, inverted oaths.

Quashing temptation to continue through Dahlberg’s delights in what he sees as Melville’s “epithalamium to the Seed”—how “Of sea grass, drear wave-plaited oceans, he wove a nuptial bed for copulating whales.” (“Morning light making havoc of one’s hands.”) Ah, talk, its unfinal pointlessnesses, its high agility, its sweats like a romp! Dahlberg (in 1966), c’est moi: “I propose to go along as I always have done, sowing dragon’s teeth when necessary, and seeding affections in the souls of my unknown readers if I can.” And: “As for myself, I’m a medievalist, a horse and buggy American, a barbarian, anything, that can bring me back to the communal song of labor, sky, star, field, love.” Time’s pull’d its black-moon’d fingertip out of its nostril now—I’d better off “to work.” 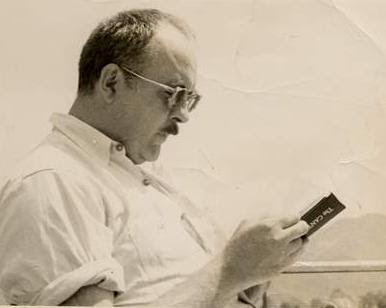