Kenneth Irby’s The Intent On

Coldish sun-slanting late March six o’clock amongst a folderol of bookish tumulus, burial “mounds.” That is, the books stack up against perennial shelflessness, lost in knee-high tightly snug’d piles. Filling a narrow corridor between the shelf itself and the table. De temps en temps I shift and uncover: redistributing, trying to determine and guide my own upcoming enthusiasms and intents. Or my dour indifferences. I keep dipping into the monstrous (glorious) anchor (or sky hook) of one pile—Kenneth Irby’s The Intent On: Collected Poems 1962-2006, edit’d by Kyle Waugh and Cyrus Console (North Atlantic Books, 2009). My remarks here inchoate, wing’d, desultory, though hardly tepid. Like all Kansas, it is something unruffled and wholly inhabitable: not a page without its magnificent thing:

Hölderlin called the lyric
“the continuous metaphor of a feeling”
the epic, “the metaphor
of an intellectual point of view”
this is the discontinuous
dendritic narrative of a journey
metaphor of pasture, anabasis and return
pastoral in that
“sluicing” meaning the juice
runs down over the head
and puddles off the fingers

That’s out of a piece call’d “Jed Smith and the Way,” though one of the things one sees with floody (oceanic, grassy) immediacy in Irby is how a writerly continuum pulls flat the fences. Is that Kansas again? Ronald Johnson construct’d an ARK out of prairie. Edward Dahlberg of Kansas City once readily recognized that Flaubert’d “said once that an artist should look long and intently at an object until he could discover some shadow or line in it that had not been seen by any other one before reproducing it”—is that “the intent on”? (There is, one hears tell, the makings of a “soi-disant Topeka School” including Ben Lerner—who begins a piece “For the distances collapsed” and editor Cyrus Console—who ends a piece “Huge, empty, he could not progress but with drifting, but in a way he had won. The air, trapped by its own weight, pushed the blimp higher into the sky.”)

In Irby, the usual markings—of poem, of part, of book—cease to matter (that diamond-point-delineated piece of “Jed Smith and the Way” is part of something bigger call’d Berkeley, itself part of a book call’d Catalpa). A dendriform (tree-shaped) continuum—I see that, the garden of forking paths is the yellow brick road up to a plethora of cities, emeraldine, smaragdine—“smaragdus, first recorded in Herodotus,” cities effervescing, regaling, transforming. See lines out of Irby’s prose poem “Narrative”:

Two cubes intersect, the intersection looks onto a sunlit meadow at the edge of which, off to the left, the dark mass of a redwood forest stands, abrupt and as great a change from the grassland as the view through the cubes is from the cubes. The pasture crowns a rounded hill, and to the West, the ocean changes color. It is early summer, mid-June, the grasses are freshly gold, in a few places near the redwoods still faintly green, kept by late rains from the transmutation uncertain wandering has carefully brought us here for.

All earlier accounts of this country were made by nautical expeditions which landed in only one or two places, did not venture far inland, and were even completely out of sight of the coast most of the time. Already we have discovered a great bay ringed by hills which earlier explorers never found at all. We were North, we thought, of that now. What ring the seasons make in this clime, we have yet to learn. We must be North, with the ocean to the West, but as many days as that seemed certain, there were as many other days when nothing could be seen from these hummocked hills but fog, and the sun itself did not reassure us, and rose contrary to our earlier fixes if it showed at all. Of ‘greate and stynkynge fogghes’ the English cleric had written. But we were, it was clear, in another layer of this new continent than that pious man had visited. He had not mentioned the trees, and through them is one entrance. Or if he knew of this, he remained silent—perhaps proof he did know, for he does mention a native reference to ‘entrance through living wood . . . I would not discount.’ But that is only the first, or simply one of many. Also of water, and of rocks. And now these tremblings as of heat waves, from hilltop and grass, gold grass, gold gold grass become—the transmutation in the air, of gold to airy thinness beaten, to float, ourselves made to float, the portion of us floated that keeps seeking change, that rests its instability on the seasons, that trembles to go forth and join with another. The poppies will be our earrings to reach for Far Pacific.

Five days before solstice we have come to this spot, far North we think, accessible only by several days’ slow travel through densely thicketed stream ravines, choked with blackberry vines in flower, beginning to bear fruit, we took as sign to stay most open to the sun. And when we ascended this high hill and promenaded the meadowed platform summit, the vista was clear in every direction only excepting South, where the big trees rise. And the sighting to the West, or whatever direction it is here the sun sets into, is straight, unfettered, gated in the hills, the notch deepest in this coast range, showing a clear V of ocean, precisely, we are confident, at the point on the horizon of midsummer sunset—these five days, we are to make ready, it is clear to us we were brought here now, to make ready, for that exact moment, of entrance.

That, too, seemingly drawing off the California mountain man Jedediah Strong Smith. One recalls Duncan’s meadow (“permitted to return to”) therein, that “made place”—the “sign to stay most open to the sun” a declared fealty akin to Duncan’s “given property of the mind / that certain bounds hold against chaos”; Irby’s “transmutation uncertain wandering has carefully brought us here for,” omen, too, to itself. The other big thing: Olson. Hefting The Intent On’s nearly seven hundred pages, some of it out of “the Land of the Hermetic Learning,” some of it riffs of American vernacular—“Oh Sweetie I’m going off on a dustdevil this evening for the big time,” some of it taking the æonic pulse (“the geologic history of rise and fall / inundation and explosion Mt Mazama’s / blast in recent Pleistocene rocking / even these distant oceantided streams”), some charting heavenly jointures (“that is, to join cosmology and continental geography”)—one recalls (inevitably) Olson’s claim (in Call Me Ishmael):

I take SPACE to be the central fact to man born in America, from Folsom cave to now. I spell it large because it comes large here. Large, and without mercy. It is geography at bottom, a hell of wide land from the beginning. . . . Some men ride on such space, others have to fasten themselves like a tent stake to survive. As I see it Poe dug in and Melville mounted. They are the alternatives.

And Irby, one thinks, in a sod house, dug in and mount’d, traversing (“uncertain wandering”) the oceanic prairie.

There’s a grandiosity of seeing here, obsessing, reiterative. The poppy earrings, say, or the uncertainty (and what largesse it allows). Here’s a couple sections of “Point Reyes Poem”:

There are only two ways onto the beach or back up
one down a stream’s gully, steps cut, boards back up
the other through a blow hole, another stream’s fall to
caught us
ankle deep coming through from the sea side
tide up, wave backed
up the pants, sopped and socks squished in the boots

The trail back is a road left over from the dairy farms, so gradual
no rise is felt at all, through bay trees showing
eucalyptus on the hills showing the sky in scattered patches white beyond

Having claim’d a Kansas, one is “permitted” California (“all architectures”—the local springs the widest propinquity) California with its “Frozen seafoam, petrified jellyfish / purpose but to wander, too rarely here, too often / mind in, locked gaze out / onto the splendiferous.”

One thing to note: the model way the editors’ve included the apparatuses of previous books: dedications, epigraphs (one terrific Osip Mandelstam line graces Cicada Woods—“A quotation is not an excerpt. A quotation is a cicada.”), statements, acknowledgments, drawings. A whole contextual history that more routinely gets stripped out of the pristine collected, or shuck’d into a corner. So: one reads Ed Dorn’s 1974 note prefacing To Max Douglas:

. . . what does it “mean” to be from Kansas. Not grass roots. That’s the broken wing dragging across the cowpiles of the republican party. Aerial roots? Yes, if the mind has aerial roots, having been in the air so long.

There is no placement but fixation in Kansas.

And, later: “Fixation. Irby has bisontine habits. No matter how far his body wanders, He never wanders. It is the endless rumination of the Big Vegetarians. It is this vaster length of service to the best earth ideas which gives nobility to the vegetarian. The habit is integral: the waving carpet of grass and the volition to movement are the same.” And, a lovely line (Irby’s “form”): “I like the long line best, but the tightest work has been done with a derringer.”

Nothing’s enough. The book’s a landmine of notational wonders. One hints and feints. A couple of parts of the stunning “Delius”:

Only a sensualist could so
trap the pain of parting
the endlessness of the moment of leaving
this world, this onlyworld, for nothingness

the scent of a hopeless black pomade
on the wind, the curl
of left foam on a beer mug
along the terrace
yet he
haunts me, beyond his music, from
another realm than he believed in
sentient

A band of seduction, about to fall off the continent
certainly not the East getting home
beyond Sacramento is the essential roughage of the Western edge
unsettling a magnetic intestinal pole track
bloodred in the sky as the Spider Woman of the North and South
fades away, sustained in the, only in the
what man has matured as a creature of, ice
the Climatology of Attention is not the Extension of Empire
an Elephant palm we might say, nursing its dying with a nuzzling trunk to reach
the stars
Deneb in the Swan over Bolinas the umbrella of an unquenchable reach
the drunken Strangers of the Earth stumbling into each other’s arms
falling off the road to find their way back to that barely remember home

“so we must look not at the mound underfoot, but at the starry horizon”

for “the soul knows itself, and would live its own life”

That, Blakean and rhapsodic and bleak, pulling native California (Moki—whose cloaks were construct’d of California condor feathers) story up, it, too, into the “Climatology of Attention”—is how the piece ends. Earlier (English composer Frederick Delius briefly managed a grapefruit plantation in Florida, and wrote compositions with African-American musical echoes—“Percy Grainger was the first to say / he heard in Ellington likenesses to Delius / outraging England”):

“In Florida, through sitting and gazing at Nature, I gradually
learnt the way in which I should eventually find myself
but it was not until
years after I had settled at Grez
that I really found myself
Nobody could help me
Contemplation, like composition
cannot be taught”

Like Delius, Kenneth Irby, too: “intent / upon a current in the world.” 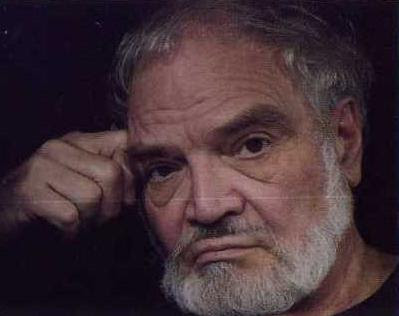 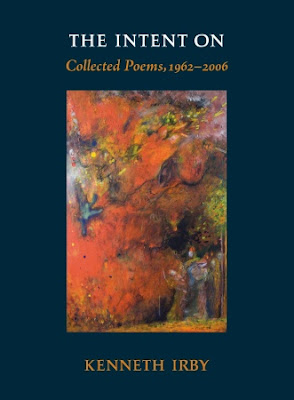