Oughtn’t I make a template, a fat plenary weekend zero? Like that Melvillean cussedness, the blank white whale blanking out the witness with admonitory plethora, so goeth the road—its numbing fever-pitch pitching idiocy directly back “at” one in its wake, a bounteously obfuscatory snow-job: “It was the whiteness of the whale that above all things appalled me.” (Appall—see, OED-hopping, “OF. apalir, apallir, later ap(p)alir, to wax pale, be in consternation; languish, waste away”: see Robert Frost’s spider “fat and white / On a white heal-all, holding up a moth / Like a white piece of rigid satin cloth— . . . What but design of darkness to appall?”; see John Hawkes’s novella Charivari:

expositor: . . . What do you see lying over there in the hay?
henry: A woman.
expositor: What is she doing?
henry: Making love to the stable boy while I do his work.

Exemplary overload. The kind of adamant chuckleheaded attachments one makes whilst the white stripes unzip behind one, the useless radio falter’d long back—somewhere near Paw Paw—gone to static and whiny self-imploring.) And, Melville, in a white study:

Is it that by its indefiniteness it shadows forth the heartless voids and immensities of the universe, and thus stabs us from behind with the thought of annihilation, when beholding the white depths of the milky way? Or is it, that as in essence whiteness is not so much a color as the visible absence of color, and at the same time the concrete of all colors; is it for these reasons that there is such a dumb blankness, full of meaning, in a wide landscape of snows?

Reading John Hawkes’s The Lime Works, endlessly struck by smells: “not the stench of rafters burning, not the vaporized rubber stench that stayed about the street for days after the hit on the garage of Autorank, Limited, but only a faint live smell of worn carpet or paper or tissue being singed within the lodging house itself”; “The loft building smells of creosote, the dead pollen of straw, and petrol”; “The train smelled like the inside of an old man’s hat—smelled of darkness, hair, tobacco.” And, looking, I note the extraordinary percept of noises, too:

. . . in the silence of the flat’s close and ordinary little bedroom he hears again all the soft timid sounds she made before setting off to market: the fall of the slippery soap bar into the empty tub, the limpid sound of her running bath, the slough of three fingers in the cream pot, the cry of bristles against her teeth, the fuzzy sound of straps drawing up on the skin of her shoulders; poor sounds of her counting out the change, click of the pocket book. Then sounds of a safety pin closing beneath the lifted skirt and of the comb setting up last-minute static in the single wave of her hair.

Is that what puts one’s senses in such a high prickly state of alert—so the story’s violence is like a gut-punch, wholly visceral? (And in the midst of a brutal beating—“the truncheon falling back, and came down hard and solid as a length of cold fat stripped from a pig”—sounds—“It made a sound like a dead bird falling to empty field. Once he stopped to increase the volume of the radio”—and sounds in the aftermath—the beater Thick “snoring and the radio had changed. Comics were talking and she could not understand a word of it.”) For no reason whatsoever—the plenum’s changeableness, meaningless empty “certificates” of existence, its losses—I think of the varieties of currency in a lovely small book of essays by the Polish writer Andrezej Stasiuk, Fado, (Dalkey Archive, 2009)—Bill Johnston translating: “the red hundred-zloty bill with a portrait of a worker on the front. On the other side was a picture of a factory that was supposed to be an allegory for industrialization in general. A dozen chimneys spewing smoke into the sky, a black locomotive rumbling along in a cloud of white steam . . . On the steel-blue twenty there was a country woman in a headscarf. On one side of the green fifty you could see the head of a fisherman, and on the other a port, cranes, and ships that looked like children’s toys. The brown five hundred had miners. They were digging coal from a dark crater with pickaxes and spades . . . the thousand-zloty bill . . . bore a picture of Nicholas Copernicus and a zodiacal map of the sky.” Stasiuk remarks of the latter note that it “had no association with exertion, with a reward for hard work. It was an abstract composition intended to serve as a reminder that money is merely a conventional thing.” Some, he vouches, “didn’t really believe you could buy anything with it.”)

Lovely sensual way to push one into a prose-writing fever, reading Hawkes. In a note, he’s admit’d the sources of The Lime Twig to be “few, elusive, and disparate”:

In the summer of 1956 . . . I found myself obsessed with what was nearly a waking vision: of an empty room which was unlike any I had ever seen in actuality yet was also totally familiar. I still see it—the rough wooden floors, the darkly painted walls, the green light that came from a single shaded window. I wanted to know what had happened in the room, or what would in fact happen in it; who had dreamt in it, suffered violence in it or was going to. For some reason I thought that this rather sinister room exited in London, though at the time I had never been to England. And for some reason the room reminded me of my father’s story of a famous horse that had been buried on the grounds of his parents’ place in Ireland. As the story went, a young woman, who was a competition rider and a person of daring, had the remains of this horse secretly dug up so that she could carry the skull back to America, where she had it mounted on a silver plaque. It was a lark that horrified her Irish relatives but made her a legend in Connecticut.
Then, inexplicably, I thought of Michael Banks, child hero of the Mary Poppins books, and associated him with the violated Irish horse of my father’s anecdote. From horse and innocent hero came the idea for a novel about two young married Londoners, Michael and Margaret Banks, whose lives are destroyed when Michael Banks is lured by an underworld gang into helping to steal a racehorse named Rock Castle. The dream that the gang holds out to Michael Banks is of mystery, riches, illicit sex in the context of an England impoverished at the end of World War II.

Mention’d, too, Hawkes’s “admiration for Graham Greene’s Brighton Rock.” (Idle inadequate examination of one’s “own” memory in inconclusive attempt to connect Sam Shepard’s later “Geography of a Horse Dreamer” to the Hawkes novel.) (Idle inadequate &c. attempt to determine amount of hooey and nonsense in Hawkes’s anecdote of the piece’s gestatory origins. No evidence, not a thing I sense in Hawkes.) That a novel’d be a room one must needs fill with something. Heather McHugh (quoted in a book by Peter Turchi call’d Maps of the Imagination: The Writer as Cartographer):

We are creatures of habit; given a blank we can’t help trying to fill it in along lines of customary seeing or saying. But the best poetic lines undermine those habit, break the pre- off the -dictable, unsettle the suburbs of your routine sentiments, and rattle the tracks of your trains of thought.

Maybe. Though that task—and focusing it so picayunely—seems so negligible against the roar of filling a room, or a London suburb, or a road. 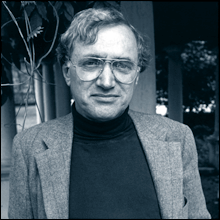