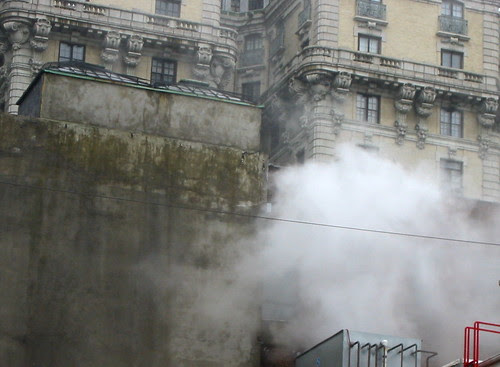 Bah. Time gets away with everything. (Or time gets off unencumber’d.) The smart-alecky clocks jump forth, rosy-finger’d dawn gets its digits, extend’d, bit. Back to the shuffling crow-black morn. (Just jamming.) Reading (in swatches interrupt’d by wheeling the voiture here and there) Henry Green’s autobiographical (“I was born a mouthbreather with a silver spoon in 1905, three years after one war and nine before another, too late for both”) Pack My Bag (1940) with a kind of stupify’d giddiness at some of the volte-facedness of the sentences. Here:

My mother used to say “how much do you love me—more than toffee?” or “more than this much” putting her thumb and forefinger so close together you could hardly see between. Years later a girl said and did the same and I could not tell her what she had made me remember, it spoilt the moment because I laughed. One is always laughing in wrong places or worse, as one gets older one is inclined to belch, it comes from pipe smoking.

It’s that final sentence that thrills me so: I find that odd veer to what a sixteenth c. “dyetary” wag call’d “thorow eructuacyons” (and, moreso, to “pipe smoking”) comparable to some speech, its cadence of lost connectors making for sudden unexpect’d delights. On the mysteries of girls (intruding in a gang on some other boy’s entertaining, that way boys do): “He would be embarrassed and she would look up in that placid accepting way they have which hides a curiosity hungrier than ours and, when we were inside and were apologizing before we dashed out, it was our turn to be shy at her knife-like shyness buttered over with an accommodating smile.” Or of beauty: “. . . on these Sundays, I began to have those first movements of delight, those first motions toward the open heart which is growing up, taking one’s place, looking beauty right in her cow eyes.”

Green’s argument for speech runs up out of a jostle regarding the “aim of the novelist” (succinctly, “to create a life which is not. That is to say, a life which does not eat, procreate, or drink, but which can live in people who are alive.”) The thing begins in wild wide focus, and slices away at possibility with a logic as indubitable as a child’s:

Art is not representational in the sense that the painter, even if he thinks he is painting from nature, does not paint life-size and in any case he is doing his best on a flat surface. But the sculptor does work in three dimensions; his figures have a back and side to them as well as a front, yet they are still; they do not move. While some sculptors have done abstract designs that move to every draught in a room, called ‘mobiles’, except for the moving elephant to carry children on the front at Margate, I cannot now think of any other animal or human figure to which a sculptor has yet given motorised movement. Art therefore remains non-representational. But, if it exists to create life, of a kind, in the reader—as far as words are concerned, what is the best way in which this can be done? Of course, by dialogue. And why? Because we do not write letters any more, we ring up on the telephone instead. The communication between human beings has now come to be almost entirely conducted by conversation. Must plays be the medium, therefore, by which creative artists in words should communicate with their audience, if any? I say not.

And Green dismisses the play for needing others to perform it: “Not so with the novelist who, when he is printed, has the typesetter to put down his symbols exactly for him, so to communicate direct with the imagination of his readers.”

Terry Southern (odd choice) interview’d Green—whom he mentions is known by some as a “writer’s-writer’s writer,” making me think Guy Davenport’s referring to Zukofsky as a “poet’s poet’s poet” got its nudge there—for The Paris Review in 1958 and quoted these lines out of Pack My Bag:

Prose is not to be read aloud but to oneself at night, and it is not quick as poetry, but rather a gathering web of insinuations which go further than names however shared can ever go. Prose should be a long intimacy between strangers with no direct appeal to what both may have known. It should slowly appeal to feelings unexpressed, it should in the end draw tears out of the stone.

In the interview, a reiteration of the prevalence of speech: “People strike sparks off each other, that is what I try to note down.” And an instance of speech, how it triggers what Green calls situation:

I got the idea of Loving from a manservant in the Fire Service during the war. He was serving with me in the ranks and he told me he had once asked the elderly butler who was over him what the old boy most liked in the world. The reply was: ‘Lying in bed on a summer morning, with the window open, listening to the church bells, eating buttered toast with cunty fingers.’ I saw the book in a flash.

Beyond that—initial situation—is “all a question of length; that is, of proportion.” (Is it here that poetry—the poet—quits the novelist’s turf—how little of the concern is, accordingly, about language. Green says: “As to plotting or thinking ahead, I don’t in a novel. I let it come page by page, one a day, and carry it in my head. When I say carry I mean the proportions—that is, the length. This is the exhaustion of creating. Toward the end of the book your head is literally bursting.”) One suspects Green of more than a little lovely and lovingly study’d obliquity. As he puts it to Southern (who relays the suggestion that Green’s work is “too sophisticated” or “too subtle”—“it offers no scenes of violence”—for American readers:

Unlike the wilds of Texas, there is very little violence over here. A bit of child-killing, of course, but no straight shootin’. After fifty, one ceases to digest; as someone once said: “I just ferment my food now.” Most of us walk crabwise to meals and everything else. The oblique approach in middle age is the safest thing. The unusual at this period is to get anywhere at all—God damn!

And, when Southern pushes on the “subtle,” Green (who’s admitted to being “a trifle hard of hearing”) says: “I don’t follow. Suttee, as I understand it , is the suicide—now forbidden –of a Hindu wife on her husband’s flaming bier. I don’t want my wife to do that . . .”