Where’d I see it? Some gruff verbosity positing—settling the matter—that light cannot be mere subject. A light is a verb, and predicatory clamor that seem’d high-hand’d for both the ineffability and the obviousness of its one-note song. (See Fenellosa’s “no nouns in nature.”) That’s what I think leaning into the smeary lit sprays of water in the cover photograph of Alan Bernheimer’s The Spoonlight Institute (Adventures in Poetry, 2009). Fountain, green metal chairs, plane trees: I suspect Paris. I suspect the le Jardin du Luxembourg. (Fun to say that. Makes the light bounce around in my mouth.) Qui sais? I like the way one’s seemingly off in the sempiternal shade here—looking in, as if into a cave of light. I like the splotchy pointillism of the leaves, the reiterating broken verbs of the light-saturated spray, stopped and globular. What a “spoonlight institute” is: aucune idée. (I think of “spoonerism”—one of the endlessly look’d-up malaprops: ah, yes, the transposing initials: “the guns of Navarone” : “the nuns of Gaborone”—something like that.) I am (obviously) spinning wheels, revving. Here’s the initial piece:

The Opposite of Proust

and never know what to do
in the presence of heartbreak

Could success amount to nothing
more than showing off
particles of the world?

Swaps, caps, floors, and costless collars—
they’re not real
and too many eggs in that basket
are not performing

I construct a reading that counters a nineteenth century slow-mo temporality (“three oaks”) with its contemporary ersatz rendering (“film stars everywhere,” “big machinery”). Unsettled ways of measurement (“endless paper”), inadequacy of social manners (“never know what to do”). Dystopia and breakdown—nothing coheres. (The marvelous lines—smack in the middle—“Could success amount to nothing / more than showing off / particles of the world?”—recalls Ron Silliman’s poetics of mere accumulation, things heap’d up, carefully—though meaninglessly—distributed throughout a system, A to Z. Are they, the letters, the “small lamps at the clearance points”?) Exemplary: “Swaps, caps, floors, and costless collars”—a list wherein every item seems a category error. (The category keeps shifting—“Swaps” is related to “caps” sonically, say, but the relation between “caps” and “floors” is object-orient’d, hardly sonic. The programming term isn’t entirely accidental: one thinks of “ad hoc polymorphism”—one thinks how “everything is an object.”) Is the moment when “Errors approach infinite sparseness” the precise point where language sloughs away (replaced by body, replaced by inchoate wordless fervors—“the Lord raptures”)? The “unknown relation between objects and beings” isn’t exactly that between signifiant and signifié, though in the realm of the “unmatched” and the arbitrary collocations, such echoes seems unavoidable. Turn the page. There’s Charles Peirce in an epigraph to “As You May Know”: “Every man’s senses cue his observatory.” Again, a body (“Language writing neglects the body”) glimpse, caught up in a concern for “system.”

If I can provide something “in the guise of” a reading for “The Opposite of Proust”—and find some delight in the way its gears mesh and shift, varying speeds, offering scenery—it’s not the case throughout. One common experience: a sense that the poem is a flat rabble of half-surreal (“The peripheral beckons / like a mouse on fire” or “lunar gaffes of benzedrine proportions”), half merely goofy (“floozies with Uzis” or “whose heart’s gone / trouting in a newspaper boat”), and largely semi-somnolent roar. Meaning (out of “Amarillo”):

. . . far back behind the groceries
a passion for optics

temperature instead of intelligence
architecture shadows this man’s world,
delicate in its feathered coinage
and ornamental hermits

The sameness—line lengths, fragment’d, three or four beats per line, lack of punctuation, no idea, no fierce Anglo-Saxon’d poke, a sheer monotony of undifferentiated lingual “units”—overwhelms: the eyes merely register the words unstirred. Nothing focuses, nothing resolves. (The style is somewhat of use in some of the shorter pieces, where suddenly a tangible’ll poke up out of the slurry: in “Kiosk”: “Stop casting porosity / with a body of meaning.”)

It’s difficult to know (not being an “adept” of Bernheimer’s writing) the chronology of the poems. Acknowledgments thank editors of earlier books, defunct magazines, &c. A play, “Particle Arms,” originally perform’d in 1982, concludes the volume. A tiny section of “State Lounge” (title of a chapbook Lyn Hejinian’s Tuumba print’d in 1981) is included. The Spoonlight Institute’d appear to be a “select’d”—though it’s not identify’d thus. One wonders what to make, then, of something like the ekphrastic “Storm at Sea” (referring to Pieter Bruegel the Elder’s c. 1568 painting Der Seesturm):

driven through the
brown whipped waves
one leaves

a wake of lime
sunlight another
pitches through

towards port
where clear skies beckon
on the horizon 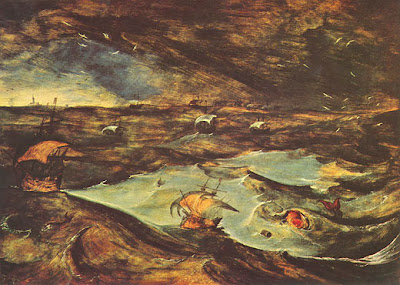 That’d seem to concern itself with a whole different “project” and history (Auden’s Brueghel piece comes inevitably “up”)—adequate in its way (I like the epithet “shoe-shaped,” and, too, “flukes dwarf”), though hardly exploratory, or “new.” Too, one finds a dandy prose poem in the form of a letter—titled “Letter” with a dateline “Marseilles”—a persona piece in the voice of Arthur Rimbaud (beginning “This brilliant artificial knee, spring-hinged with small birds’ bones, is too late,” and ending, “I sleep no more than an insect.”)

In some ways, I find “Particle Arms,” Bernheimer’s play—it appears, too, in the Killian and Brazil-edit’d Kenning Anthology of Poets Theater: 1945-1985--of greatest note. What I like: the tension and interplay between the ongoing broken-English’d talk in each scene and the comments Bernheimer’s provided in the append’d “Particle Arms (Story Map).” (In the Kenning Anthology, the “story map” is lacking. In a note there, quoting “a handbill printed for the occasion” of a 2008 “revivifying” of Poets Theater works, Bernstein writes:

I pictured a stage, with play characters on it, not real people. I was hearing theatrical characters say those lines as I read them back and forth to myself. What was the dramatic tension between the characters, the situation that developed in the lines?—is what I paid attention to, not any premeditated scheme of plot. And eventually a plot did develop. Or a possible plot, but I kept pushing it down below the surface, which was to be maintained and constructed of words, not “speech” (although the characters do have a weakness for giving speeches.)

Whence, then, one wonders, the perceived need for the map? I like, though, to correlate the differences (testing some idle Scott Fitzgeraldean “ability to hold two opposing ideas in mind at the same time”). Here’s the map of the opening scene:

(Night, a city street.) Bunker, dressed for travel and carrying luggage, is attempting to slip out of town, but is intercepted under a streetlamp by his friend Karp, with whom he drinks several toasts. Karp tries to prevent his departure, and Bunker, a man of few words, tarries long enough to be surprised by Nyla, the last person he wants to see. It appears Bunker and Nyla have a history, whose recent events are not happy. Karp interjects facetious asides into their heated exchange. Despite Nyla’s arguments, Bunker has made his decision and takes his leave.

Note the (intentional?) clichés (“a man of few words,” “have a history,” “takes his leave”)—I’m suddenly remind’d of the banality of soap opera listings (not entirely happy to be so remind’d). Here’s part of the corresponding play—beginning just after Nyla’s entering:

Nyla: I merely wanted to take you on the wing.

Karp: If I could do cartwheels I would.

Bunker: If you have something to say, lower your voice and smile.

Nyla: Don’t look so injudicious. I always get the point of jokes. The directions are based on material prepared by Uncle Sam. Life has a good effect on me.

Karp: And it does its tricks.

Bunker: The name’s familiar, like putting your pants on. But they don’t make that kind of time on watches. Peculiar risk of harm masks the clench.

Nyla: Don’t hurt yourself to change the subject.

Karp: He thinks I’m from National Geographic. My work here has always been volunteer work. Cash is mere bouquet.

Nyla: Money is the sex of arithmetic.

Bunker: The illusion is that everything is the same. Heavy machinery in the backwash of the Milky Way. It’s not my country. It isn’t even luxury.

Karp: Suit yourself. Assuage the turbulence of rational awareness.

Nyla: My personality does not evaporate. There are times I need a ballad, but the feeling is not for your amusement. Someone your shape shouldn’t wear those shades. I’m having a hard enough time with underlings without contributions from the bemused. Minerals thrive on benevolent neglect, while biology sheds a tear for the uninvited. You opted for a limited scenario. On-the-job habits become dream metaphors. Now you spend nights touching up days, a little twist here and there, up and down the chain of command.

I suspect the bon mot here and there, particularly the self-referential kind—“Don’t hurt yourself to change the subject” after the mouth-work of “Peculiar risk of harm masks the clench,” or “You opted for a limited scenario,” or Nyla’s line in Scene 4, “Do you just talk that way, or does it take theories?”—I suspect these provide some necessary minor hoots in production. 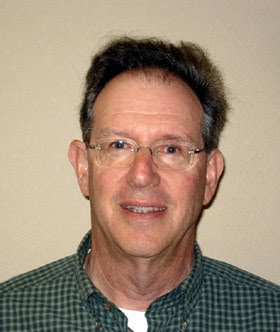 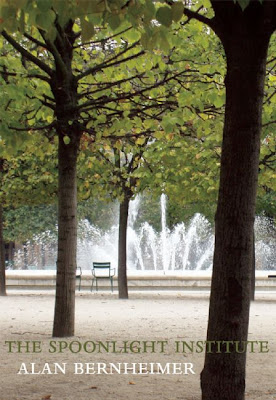 Alan Bernheimer’s The Spoonlight Institute
(Cover photograph by Alan Bernheimer. Oddly, the lettering here differs, serif’d and ink’d in green, probably a mock-up. In the final copy, titling in white is center’d in the foliage, name in green in the sand.)

Off a few days. Mid-week, next.