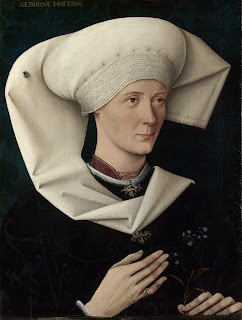 “Portrait of a Woman of the Hofer Family,” c. 1470
(“Who holds a forget-me-not, presumably for remembrance. On whose headdress is a fly, either a symbol of mortality or a reminder of the artist's skills of illusion . . .”)

Weekend of usual asperity (“Iuyce of Mynte taketh away the asperitie, and roughnesse of the tongue . . .”) and chore (“like the cat— / that takes its prey to privacy, / the mouse’s limp tail hanging like a shoelace from its mouth.”) Dabbled through some Nabokov, finishing Laughter in the Dark (1938), beginning Look at the Harlequins! (1974). Nabokov’s sardonic refusal, aping a readerly idiocy: “Sometimes when I work too late and the spies of thought cease to relay messages, a wrong word in motion feels somehow like the dry biscuit that a parrot holds in its great slow hand.”* Language buckling under its own demands. Or, language providing itself with its own perfect vocabulary: note the sly offhand anagrammatic parry in Nabokov’s lines: “I am not one to persevere in a struggle with faulty abstractions of space . . . the afternoon is my favorite item of time.” Nabokov’s deft assembling of words that “merely” emit each a kind of consanguineous stupor (“item,” “time,” “emit”), a way of seeing the lingo’s own interstitial seamlessness, word meeting word in avoidance of thing. Here, too, a harlequinade of spangles (words a buffoonery and inadequate pantomime of the world’s doings):

(When she cried out those four words, they came out in a breathless dactylic line with a swift lispy lilt, as if it were “lookaty,” assonating with “lickety” and introducing tenderly, ingratiatingly those “harlequins” who arrived with festive force, the “har” richly stressed in a burst of inspired persuasion followed by a liquid fall of sequin-like syllables).

Too, the offhand bookishness (literary “seamlessness,” the way a word shepherds and arrays all its prior references). Nabokov, referring to the H. G. Wells novel:

. . . And did I remember what Stephen said in The Passionate Friends when he left the room—the neutral room—where he had been allowed to see his mistress for the very last time?
“I can answer that. The furniture there was slip-covered, and he said, ‘It’s because of the flies.’”
“Yes! Isn’t that marvelous! Just blurting out something so as not to cry. It makes one think of the housefly an old Master would paint on a sitter’s hand to show that the person had died in the meantime.”
I said I always preferred the literal meaning of a description to the symbol behind it.

So that one turns to Wells to see:

In operas and romances one goes from such a parting in a splendid dignity of gloom. But I am no hero, and I went down the big staircase of Tarvrille’s house the empty shuck of an abandoned desire. I was acutely ashamed of my recent tears. In the centre of the hall was a marble figure swathed about with yellow muslin. “On account of the flies,” I said, breaking our silence.
My words were far too unexpected for Tarvrille to understand. “The flies,” I repeated with an air of explanation . . .

Where is it that Nabokov explains the Russian word “Nichevo”—“(a ‘so-so’ tinged with a ‘well enough’)”? Language’s sweet malleable inconstancy, its precocious and utile flaws.


* Another “hand” / “wing” anomaly occurs in a 1969 Vogue interview, Nabokov is asked about the role of “magic, sleight-of-hand, and other tricks” (“Are they for amusement or do they serve yet another purpose?”) and replies:

Deception is practiced even more beautifully by that other V.N., Visible Nature. A useful purpose is assigned by science to animal mimicry, protective patterns and shapes, yet their refinement transcends the crude purpose of mere survival. In art, an individual style is essentially as futile and as organic as a fata morgana. The sleight-of-hand you mention is hardly more than an insect’s sleight-of-wing. A wit might say that it protects me from half-wits. A grateful spectator is content to applaud the grace with which the masked performer melts into Nature’s background.