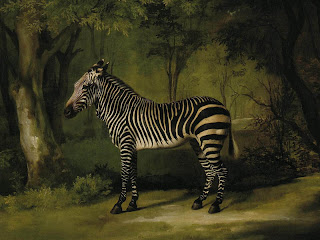 All afternoon the gramophone
Parl-parled the West-Indian weather.
The zebra leaves, the sea
And it all spoke together.

The many-stanzaed sea, the leaves
And it spoke all together.
But you, you used the word,
Your self its honor.

The world lives as you live,
Speaks as you speak, a creature that
Repeats its vital words, yet balances
The syllable of a syllable

But I haven’t enough ear, I keep circling back to these apparent simplicities. A slip of the pen and you have begun to draw. The feel of the pants to assure they be straightened as loosely as possible. I fear I have merely abandoned all these men at their knocks on different doorways. One enabling clue might be this painting by Picasso of a girl at her morning bath in a pan scaled so oddly it appears she is standing in a beertray on the table. The bed is a mound of pearl butter comforters. The couch is marked in a zebra’s blood. She is someway hooked there and if she can not move nothing else there can.

of the day he saw the zebras fucking. “Much more powerful than a Picabia,”
he thinks, “with that big black piston plunging and exuding from

the distended grin of its loved one’s O,” and blushes at the soldiers who
are grinning at him because of a certain other baton he has unthinkingly

grabbed before it gets tangled in a nearby tree . . .

. . . Just so, Shuffle said,
I don’t want to be around when the gang erupts
into centuries of inviolate privilege, and cisterns tumble down
the side of the slope, and all is gone more or less naturally to hell.
To which Dimples replied, Why not? Why not just give yourself, one time,
to the floods of human resources that are our day?
Because I don’t want to live at an angle to the blokes who micromanage
our territory, that’s all. Oh, who do you mean? Why, the red-trimmed zebras,
Shuffle said, that people thinks is the cutest damn things in town
until the victory bonfire on the square, and then there’s more racing
and chasing than you can shake a banjo-string at . . .

Hooves scattering geese, Dane horns from the bog, wolves baying tenor, and the Young Hordes were at the gates, a troop of children on ponies like a field of tulips to see, dogs and drums to hear. They were dressed in the Manchu colors of Magyar royalty, tangerine dolmans, sulphur boots, chestnut gauntlets.
The hetman raised his lur and blew the alectorian figure, a military fancy in triple time, and the pelagic notes rose above a stampedo of timbals, whinny of zebras, nicker of quaggas.
The trumpeter of the catapan answered with a fanfaronade . . .

Apeneck Sweeney spreads his knees
Letting his arms hang down to laugh,
The zebra stripes along his jaw
Swelling to maculate giraffe . . .

Winked too much and were afraid of snakes. The zebras, supreme in
their abnormality; the elephants with their fog-colored skin
and strictly practical appendages
were there, the small cats; and the parakeet—
trivial and humdrum on examination . . .

If sentences constitute
everything we believe,
Vocabularies retool
Our inability to measure and get it right,
And languages don’t exist.
That’s one theory. Here’s another:
Something weighs on our shoulders
And settles itself like black light
invisibly in our hair . . .
Pool table. Zebra rug.
Three chairs in a half circle.
Buck horns and Ca’ Paruta.
Gouache of the Clinchfield station in Kingsport, Tennessee.
High tide on the Grand Canal,
San Zeno in late spring
Taken by “Ponti” back in the nineteenth century.
I see the unknown photographer
under his dark cloth. Magnesium flash.
Silence. I hear what he has to say.

—Charles Wright, out of “Reading Rorty and Paul Celan One Morning in Early June”
(Chickamauga, 1995)

The quality of nothing is not strained,
but saying so’s tense like a cartoon zebra.
“The variability of the world”
—incidental winks of it start to party into view—
absolutely hot & cool, at the moment,
is, & likely to remain so.

What was the variety of nature—but a construct of the imagination, a public fantasy, a veering, Athena with the face of Mary, Mary with the face of a woman who squatted on the road, as the pod of her body opened? The erection of a conclusive system would probably be forever beyond man’s powers . . . There could be nothing simply and absolutely so—but many possibilities, alluring as bypaths, many visions, deformities, grandeurs, scandals, soldier kingdoms, overladen horses, warped glories, holy cities. The external world, on its entrance to the mind at Harmony, had been ferried from reality to the most fearful unreality—as if the kingdom of God cometh not with observation of nature. Suppose the gulf between the finite and infinite to be itself infinite, however? It would be better to accept the tangible reports of the sensations, wherever possible—parasitic tufts on the maple, a bird in the bush, hooked seeds, the zebra stripes of sunlight on dark grasses, orange trumpet flower, a woman’s breasts. Better to have been a nomadic pioneer, wanderer like nature herself, who leaves her footprints in the marshes . . .

—Marguerite Young, out of Angel in the Forest: A Fairy Tale of Two Utopias (1945)

Where is the hiss of everyday life
A young painter at the Hermitage was copying Titian’s “Portrait of a Young Painter”
At the Peter-Paul Fortress sunners stood in the sun’s line of fire
Perfection
Then the young painter pulled a knife
Hillocks, tomatoes, flags, rocks, zebras, a feeling of weakness—the fact itself is at its limit
Nature is only some necessary addition to the city . . .

He placed various objects in turn—an apple, a pencil, a chess pawn, a comb—behind a glass of water and peered through it at each studiously: the red apple became a clear-cut red band bounded by a straight horizon, half a glass of Red Sea, Arabia Felix. The short pencil, if held obliquely, curved like a stylized snake, but if held vertically because monstrously fat—almost pyramidal. The black pawn, if moved to and fro, divided into a couple of black ants. The comb, stood on end, resulted in the glass’s seeming to fill with beautifully striped liquid, a zebra cocktail.

. . . stop to answer
the craftiest command of inert man
rolled from the colossal ear. Year
of hell and harmony, spill you a
good sleep, near the zebra’s hoof.

—James Schuyler, out of “Africa! Africa!” (Other Flowers: Uncollected Poems, 2010)

like overweight ants dragging their take
away from an abandoned sandwich

A deal in every aisle, every hour, every day
says a colossal signboard on the vast hanger . . .

Above the sky-blue gabardine slacks he wore a two-tone leisure jacket which would have been revolting on a zebra.

—Raymond Chandler, out of a notebook

. . . if art is something, it is everything, which means that it must be self-sufficient, and that there is nothing beyond.
There’s a famous Russian cartoon in which a hippopotamus, in the bush, points out a zebra to another hippopotamus: “You see,” he says, “now that’s formalism.” The existence of a work of art, its weight, are not at the mercy of interpretive grids which may or may not coincide with its contours. The work of art, like the world, is a living form: it is, it has no need of justification. The zebra is real, to deny it would not be reasonable, though its stripes are doubtless meaningless . . .

—Alain Robbe-Grillet, out of “On Several Obsolete Notions” (For a New Novel, 1965)

Let Porcupine rattle quill, in a Casseopia of Hollyhock.

Let the whinny of Pigeons’ wings trigger similar strains
from elm to Triangulum.

Let a score for matter’s staccato to cornstalk be touted to
stars clustering The Archer’s wrist.

Let the stripes of Zebra be in time with the imaginary
House of Mozart, on Jupiter.

Why me, hackberry—
I am your friend. One song
per season. Throw of
yucca seeds lacquer black
comes up

Cool wonder of
All lives: one song per:
Zebra swallowtail
touch down,
confer.

Letters, postcards, billets-doux, telegrams, whole manuscripts, rough drafts, files, photos, a lock of Byron’s hair, the long pipe that Peter Cushing smoked in The Hound of the Baskervilles, Churchill’s cigar butts, engraved cigarette cases, over-elaborate walking sticks, tried and tested amulets. It wasn’t an unusual walking stick that had aroused his capricious buyer’s impulse during the bidding, but a ring that had belonged to Crowley, Aleister Crowley, he explained benevolently, a mediocre writer and a self-declared madman who called himself “The Great Beast” and “the wickedest man in the world,” all his private possessions had 666 engraved on them, the number of the Beast according to the Apocalypse, nowadays rock groups with demonic pretensions play around with the number, but it’s also to be found hidden in many computers, it’s the joker’s number, the living have no idea how old everything is, remarked Dorta, how hard it is to be new, what do young people know about Crowley, the orgiast and Satanist, he’d probably be considered a harmless, naïve conservative these days, a kindly man at heart who transformed his disciple Victor Neuburg into a zebra for making too many mistakes during an invocation of the Devil in the Sahara, so Dorta told me, and rode on his back all the way to Alexandria, where he sold him to a zoo which looked after the incompetent disciple or, rather, zebra for two years, until Crowley finally allowed him to resume his human form, he was a compassionate man at heart. Neuburg later became a publisher.

Etymological chain: Sade, Sado, Sadone, Sazo, Sauza (village of Saze). Again, lost in this lineage, the evil letter. In attaining the accursed name, brilliantly formulated (it has engendered a common noun), the letter that, as we say in French, zebras, fustigates, the z, has given way to the softest of dentals.