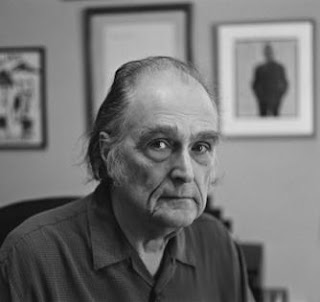 Level of the word, level of the sentence. Clark Coolidge, quoting Edgar Allan Poe’s “The Fall of the House of Usher” (out of the 1977 lecture “Arrangement”):

The conditions of the sentience [I think that’s the correct word, though in my edition it said “sentence” which is somehow more appropriate] had been here, he imagined, fulfilled in the method of collocation of these stones [he’s talking about the house, which is about to fall]—in the order of their arrangement, as in that of the many fungi which overspread them, and of the decayed trees which stood around—above all, in the long undisturbed endurance of this arrangement, and in its reduplication in the still waters of the tarn.

A sentence being precisely whatever is “fulfilled in the method of collocation” of its words—“in the order of their arrangement.” Whatever sentience, particular or loose. Completed in the making itself: a processual and improvident assembling. And: the sentence is “reduplicated” by the landscape itself (in lieu of mimicking its surround). Recalling the Williamsesquerie of “perfection of new forms as additions to nature . . .”

At most a book the porch. Flames that are at all rails of snow. Flower down winter to vanish. Mite hand stroking flint to a card. Names that it blue. Wheel locked to pyramid through stocking the metal realms. Hit leaves. Participle.

—and proceeds to reject its “New Sentence” pedigree seemingly because its phrasal units work “primarily below the level of the sentence.” Silliman:

In other contexts, any of these could become a new sentence, in the sense that any sentence properly posed and staged could. Each focuses attention at the level of the language in front of the reader. But seldom at the level of the sentence. Mostly at the levels of phrase and clause. “Flower down winter to vanish” can be a grammatical sentence in the traditional sense if flower is taken as a verb and the sentence as a command. But “Names that it blue” resists even that much integrating energy.** Coolidge refuses to carve connotative domains from words. They are still largely decontextualized—save for the physical-acoustic elements—readymades.
This is not an example of the new sentence because it works primarily below the level of the sentence. However, there is another important element here as a result: the length of sentences and the use of the period are now wholly rhythmic. Grammar has become, to recall Barthes’ words, prosody . . .

Coolidge, remarks concerning sentences. Out of Mine: The One That Enters the Stories (1982):

A sentence is the apt to find comforts of a closure.

A sentence grows to a point.

The sentence marks its own error.

Sentences of description tend to loss of kilter.

Tension of sequence as a sentence structure.

Sentences are shortness of breath.

The vista lay in a sentence gap.

Sentences protect us from the storms at their margins.

A smattering, a collect. Everywhere the sense of the sentence’s limit, how it cannot attend to the whelm and largesse of what? the world? the brainpan’s own unstoppable extending? The upshot: frontiers and boundaries. “A case of banded beets on story avenue.”


* Compare, for example, that paragraph with another (out of the initial section of “Weathers”—found in Coolidge’s A Book Beginning What and Ending Away):

So light a cloud from beneath. It’s like writing on weather is like writing on nothing. Then he said at the desk it’s like everything. Seem it was Thoreau had no weathers the better to write of. Like of a thing, necessarily secondary, James Dickey. In the center of nothing, but in the center of the hole a singularity, revoking laws. The edge of this state of the universe ends with the sky. Thought it was of all portal and no sash.

No proceeding “Mostly at the level of phrase and clause” there. No “wholly rhythmic” sentence-length and periodicity either. The “rhythmic” in Coolidge’s work is summoned invariably—what if he didn’t play the drums? Charles Bernstein, too—in “Artifice of Absorption” (1987)—opposes Coolidge’s “imploded-sentence” works (“in prose / formats, whose syntax spirals / outward in an open- / ended way”) in Weathers against “the serial / ordering (juxta- / position) of more / syntactically orderly, / ‘tightly’ structured sentences / in so-called ‘new sentence’ / writing”:

Clark Coolidge’s improvisatory extensions
of the line refuse the closure of the subject / verb / object
sentence; refuse, that is, the syntactic ideality
of the complete sentence, in which each part
of speech operates in its definable place so that
a grammatic paradigm is superimposed on the actual
unfolding of the semantic strings. In “imploded-
sentence” poetry, meaning flows durationally—
horizontally—by means of the linear continuousness
of the sweeping, syncopated rhythms. While in
the complete / closed sentence, attention is deflected
to an abstracted, or accompanying, “meaning”
that is being “conveyed”, in the imploded sentence
the reader stays plugged in to the wave-like
pulse of the writing . . .

The days that will carry you, they told, but neglected to
include the word forward, carry the words forward.
The style of these environs is to disappear from time to time.
I lived in the back, narrowing my vision, lifting hands
from the act of placing one on top of other.
The room for all of anything you could ask
grew green. Are some of the colors shorter?
Is your mind measurable of its contents as a flask?
Will a sentence always have to await its ending to
give itself question?
There are never enough stars in the sky, even at its
height, even when you look slightly apart.
I took the opportunity to rest when the city upped and flew.
A case of banded beets on story avenue.

** There’s no difficulty though in making “Names that it blue” “a grammatical sentence in the traditional sense”—if that’s what Silliman’s complaint is. In a context of naming words (recall Coolidge’s query in The Crystal Text—“What is / a word’s name?”) or coloring words, so-and-so is providing the word “it” with the name “blue” (just as, in another context, one might assign “sentence” the name “readymade.”)