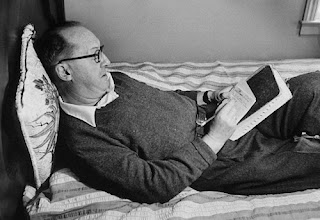 Dogged Monday. Two dribs of quasi-writerly concern (Despight the Reverend Dr. Swift’s admonitory fillip: “Do not, I pray thee, paper stain / With rhymes retail’d in dribbs.”) Out of Vladimir Nabokov’s The Real Life of Sebastian Knight (1941), an attempt to master (metaphorically) the common mystery of the naked—unclothed, untongued—pensée. The form / content struggle asserted, with the maddening insouciance of its small victories. Nabokov’s worrying the novelist Knight’s routine labors to say a thing, any thing:

. . . the bridging of the abyss lying between expression and thought; the maddening feeling that the right words, the only words are awaiting you on the opposite bank in the misty distance, and the shudderings of the still unclothed thought clamouring for them on this side of the abyss. He had no use for ready-made phrases because the things he wanted to say were of an exceptional build and he knew moreover that no real idea can be said to exist without the words made to measure. So that (to use a closer simile) the thought which only seemed naked was but pleading for the clothes it wore to become visible, while the words lurking afar were not empty shells as they seemed, but were only waiting for the thought they already concealed to set them aflame and in motion. At times he felt like a child given a farrago of wires and ordered to produce the wonder of light. And he did produce it; and sometimes he would not be conscious at all of the way he succeeded in doing so, and at other times he would be worrying the wires for hours in what seemed the most rational way—and achieve nothing.

There’s that, and Nabokov’s lovely rendering of the matérialité de la langue (only to deride the particular material here—the word “sex”—as rather mean and void of sense—I cannot think of Nabokov’s lauding of the materiality of the word without recalling the pencil sharpener in Pnin (1957)—“that highly satisfying, highly philosophical implement that goes ticonderoga-ticonderoga, feeding on the yellow finish and sweet wood, and ends up in a kind of soundlessly spinning ethereal void as we all must”—the object with its pencil manufactory name consuming itself the way language, too, “must,” and does . . .) Nabokov:

Naturally, I cannot touch upon the intimate side of their relationship, firstly, because it would be ridiculous to discuss what no one can definitely assert, and secondly because the very sound of the word “sex” with its hissing vulgarity and the “ks, ks” catcall at the end, seems so inane to me that I cannot help doubting whether there is any real idea behind the word. Indeed, I believe that granting “sex” a special situation when tackling a human problem, or worse still, letting the “sexual idea,” if such a thing exists, pervade and “explain” all the rest is a grave error of reasoning. “The breaking of a wave cannot explain the whole sea, from its moon to its serpent; but a pool in the cup of a rock and the diamond-rippled road to Cathay are both water.” (The Back of the Moon.)

Quoting out of one of Sebastian Knight’s supposed novels. The lingual feint and marvel, how language offers up what it withholds, how it provides only to deride. To suspect there is no certainty beyond the momentary chewable measure and joy of its saying behind any word . . .
Posted by John Latta at 6:14 AM