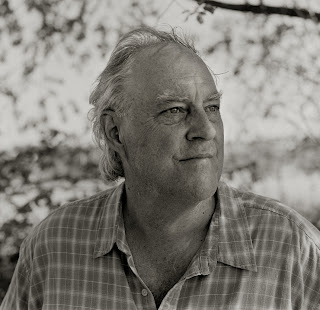 Out of the new Chicago Review, the opening chords of a terrific conversation between Brian Blanchfield and Merrill Gilfillan. Blanchfield begins.

I think of your work—in both poetry and nonfiction—very much as belonging to the High Plains of the North American West, and specifically to its rivers small and large: the South Platte and the Tongue and the Powder and the Niobrara. So, in coming across the photograph of you and Ted Berrigan and Alice Notley in the late 60s standing on the porch of the home in Ann Arbor where Frank O’Hara had twenty years earlier rented a room while a graduate student at Michigan, and in knowing well that your eight years in New York City after studying with Berrigan and Anselm Hollo at Iowa were steeped in New York’s experimental poetry community, that you had your early work published by small presses like Lewis Warsh and Anne Waldman’s Angel Hair Books, the contrast is sharp—between the beginnings of your writing life under those auspices on the one hand and, on the other, the wonderfully independent and rather quiet poetry of the last fifteen or twenty years so adherent to riverbanks and “chokecherry places.” When did you move to Colorado, and can you reflect on whether and how the High Plains have changed your work in poetry? Is the contrast I draw stark to you, too, or is your poetry now a continuation of what you began at Iowa and in New York?

I went to Colorado in 1980 to visit an old friend in Boulder, and ended up staying. Soon, whenever I could borrow a car, I was exploring the grasslands east of the mountains as often as possible, driving the lesser roads and walking where I could. A steady intimacy and elation slowly developed with the landscape and its various spaces and secret “chokecherry places”—in part, I am sure, because it was a landscape I had doted on many hours as a boy, from fantasias of Native American lifeways to later, more substantive reading on the plains tribes, book after book—such writers as George Bird Grinnell, to name one favorite. (When I left for the University of Michigan in 1963 I was still planning to major in the ethnology of the native plains peoples.) So I was looping at thirty miles per hour through an area of very detailed, richly textured history, largely of a culture not my own, from Alberta to Texas, through spaces inciting contemplation more than any histrionics or undue bravura. It was a classic continental pattern: grand imaginations of the West, then the encounter, the thing itself.
I had gone to New York City following my university years in search of bigger, or at least saltier, water, in the same way young men in Balzac novels left their provinces for the intricacies and cafés of literary Paris. The poetry scene in New York in the late 60s was spirited and energizing. There was a great (if unspoken) sense of generational front amid the variety of youngish writers, all hard at work. Brightness, lots of American Dada, and of course the conviction that art was one of the higher callings. I eventually left town on a Greyhound due to a persistently itchy foot and mild claustrophobia.
As I began to have notions of writing about the Great Plains experience, I found that poetry (as I had learned it) balked. Vast spaces have necessities of their own, in an aesthetic sense; they brook no foolishness. The particular refraction of my poetic mode at the time felt inadequate, uneasy. I instinctively turned to prose in order to handle more directly the simple affection for that landscape-theater, studying prose writers like D. H. Lawrence (his travel books), W. H. Hudson, Turgenev of the Sportsman’s Sketches, even A. J. Liebling and English Hours by Henry James—writers skilled in the art of “Fuji viewing.” This opened an entirely new palette and new, relaxed rhythms.
After a few years of that, I began to feel qualified to deal with the human vectors on the landscape, native peoples mostly, and started writing short stories. Eventually, after Magpie Rising was completed, I was able to work comfortably in poetry out there, in poems with a horizontal pacing flexible enough to stand honorably in the landscape—poems like “Penstemon Bearings, “On Heart River,” and “From the Erstwhile Forks of the Grand.” And I still make small schematic drawings of rivers snaking across the plains—word-free homage to their elegant creaturehood.
That all was one focus—though a major one—for fifteen years or so. But I was writing from other landscapes with more people and more trees the whole time as well. The Appalachians, France, my home ground of Ohio. As circumstances arouse.

You use the word “refraction” to describe a kind of poem that isn’t worthy of the terrain you know, and, applied to poetry the word indicates to me a kind of splintering focus, an aloof indirectness, oblique, even dodgy. Is that it? Could you say more about what sort of foolishness there is in poetry that vast places do not brook? Is a refracting poem foolish because it too strenuously manages the poem’s materials?

Not that refraction in itself is “foolish,” but that its taproot connection with a kind of slippery irony and wink of the eye can, at its worst, lead to an endlessly coy jockeying. By refraction I mean a kind of writing that carries in its premise a partial removal from direct referential communication. Refraction (amplified definition): “Deflection from a straight path undergone by a light ray (words) passing from one medium (air / mind) to another (glass / ink).” The process involves pushing one’s writing through a conceptual mesh that adds a subtle bossing or hatching to the tenor of the words, an inflection that lends a sort of stylish linguistic distance and autonomy to the text. As a high-profile example, most all of John Ashbery’s poems seem to me highly refracted; Frank O’Hara’s, not.
I once mentioned in an essay the difficulty I had on an extended prairie drive finding suitable music to play in the car. Blues, Louis Armstrong, Scarlatti—nothing held up out there: even the most gifted antics or emotional sit-dram seemed like contortionist posings or over-rehearsed routines. A few tapes of Kiowa and Pawnee powwow songs finally did the job, day after day. All this to say that a similar straightforward, low-ego presence seems to fit better in writing, too, rather than a highly refracted (or managed, as they say) mode. Less treble, more bass. (Have you ever heard Ernest Tubb sing “I could waltz across Texas with you”?)

Such sterling modesty and good sense requiring keen attendance, irrefragable esteem, and no comment.
Posted by John Latta at 6:20 AM