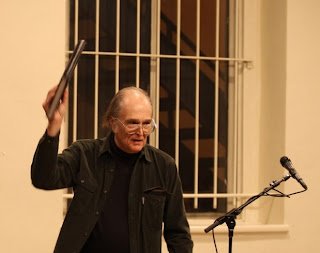 Morning pulls tight the drawstring around the bag of night, its unending rain. Doughty and perspicacious in my aimlessness, one way of attending. Ongoing’s ongoingness. “There is nothing stable in the world; uproar’s your only music.” (Keats, out of a letter writ 13 January 1818.) And (24 September 1819): “The only means of strengthening one’s intellect is to make up one’s mind about nothing, to let the mind be a thoroughfare for all thoughts. Not a select party . . . All the stubborn arguers you meet with are of the same brood— They never begin upon a subject they have not pre-resolved on.” And (9 October 1818): “The Genius of Poetry must work out its own salvation in a man: It cannot be matured by law and precept, but by sensation and watchfulness in itself. That which is creative must create itself.” (Recalling something Clark Coolidge says is Cecil Taylor’s: “Improvisation is the capability to talk to oneself.”)

Somewhere in Coolidge’s Now It’s Jazz: Writings on Kerouac & The Sounds (1999), he quotes Maurice Blanchot’s “one can only write if one arrives at the instant towards which one can only move through space opened up by the movement of writing.” Out of “The Gaze of Orpheus.” In its context (at the end of the essay), thus:

The act of writing begins with Orpheus’ gaze, and that gaze is the impulse of desire which shatters the song’s destiny and concern, and in that inspired and unconcerned decision reaches the origin, consecrates the song. But Orpheus already needed the power of art in order to descend to that instant. This means: one can only write if one arrives at the instant towards which one can only move through space opened up by the movement of writing. In order to write one must already be writing. The essence of writing, the difficulty of experience and the leap of inspiration also lie within this contradiction.

each line
equals
its own completion

and every line
its consequence

wholes are only made by motion

“Sight is the only sense in which continuity is sustained
by the addition of tiny but integral units: space can be
constructed only from completed variations.”
—Roland Barthes

The Barthes lines out of the 1954 essay “Objective Literature: Alain Robbe-Grillet”—one finds it prefacing the 1965 Grove Press edition of Robbe-Grillet’s Two Novels (and, too, in a 1958 number of Evergreen Review.) One reads therein, too, of how “Time dislocates space, arranging the object like a series of slices that almost completely cover one another: and it is this spatial ‘almost’ which contains the temporal dimension . . . It is the kind of variation crudely—but recognizably—indicated from frame to frame in old films, or from drawing to drawing in a comic strip.” Recalling (“a series of slices that almost completely cover one another”) rather precisely the repeated antics of Gertrude Stein, juddering the temporal “home” (that space that opens for its ongoing conveyance). Out of “Man Ray” (1924), one of the “Portraits and Figures” found in the Painted Lace volume of the Yale Unpublished Writings:

Attending’s ongoingness. “There is nothing stable in the world.” Proceeding “by sensation and watchfulness in itself.” One thinks of a thing Hugh Kenner reports (The Poetry of Ezra Pound) regarding something I. A. Richards found in the series of experiments recorded in Practical Criticism—

that the effort of continuous attention required by the poet is beyond most readers’ habits. A grape, ten lines of sawdust, another grape, becomes the most comfortable structural norm.

Poems containing “a plangent line or two,” the rest offering but “uninspected reverberation.” What Kenner calls the “expectation of something which demands attention only in snatches, and affords a moony repose in the intervals.” Why Clark Coolidge (or Gertrude Stein) requires a new (“doughty and perspicacious”) reading strategy.
Posted by John Latta at 7:54 AM