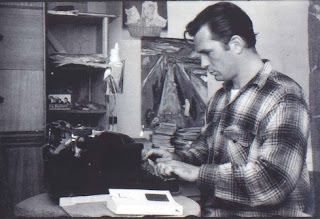 Clark Coolidge, out of “Visions of Cody Notes” (in Now It’s Jazz: Writings on Kerouac & The Sounds):

Being Coolidge’s own “accumulative compulsants” list of Kerouacisms. “That window paper” snagged out of Old Angel Midnight:

Wreck the high charch chichipa & get ﬁrm juicy thebest thebest no other oil has ever heard such peanut squeeze— On top of which you yold yang midnockitwatter lying there in baid imagining casbah concepts from a highland fling moorish beach by moonlight medallion indicative spidergirls with sand legs waiting for the Non Christian cock, come O World Window Wowf & BARK! BARK! BARK for the girls of Tranatat— because by the time those two Mominuan monks with girls & boys in their matted hair pans sense wind in the flower the golden lord will turn the imbecile himself into slip paper— Or dog paper—or that pipe blend birds never peck because their bills are too hard—that window paper

Kerouac’s “haddalada-babra of babbling world tongues coming in . . . sounds of people yakking and of myself yakking among . . .” Though here, too, a sense of the writer becoming the writing paper itself, the inscriber inscribed. An undated note out of Kerouac’s “Forest of Arden Journal” (roughly summer of 1948):

Writing, you can do no better than surrender, with humble understanding and perhaps chagrin, and the purging joy of that, the communicative relief of that, to the most personal secrets of yourself with the laborious purposeful hammer of work, into stanzas and stories that draw the universal humanlike irredeemable understanding to them, in the way that grace and beauty always attract in nature—the pool unmuddled by any self-dishonesty either stupid or highly conscious, or by cant, or by comprehension of others made in fear and misunderstanding.

To surrender to the “purging joy” of the “hammer of work.” No little correspondence here to Kerouac’s “breakthrough” note about sketching in the 18 May 1952 letter to Ginsberg: “Sketching (Ed White casually mentioned it in 124th Chinese restaurant near Columbia, ‘Why don’t you just sketch in the streets like a painter but with words’) which I did . . . everything activates in front of you in myriad profusion, you just have to purify your mind and let it pour the words (which effortless angels of the vision fly when you stand in front of reality) and write with 100% personal honesty both psychic & social etc. and slap it all down shameless, willynilly, rapidly until sometimes I got so inspired I lost consciousness I was writing . . .” (Words thus arriving—“effortless angels of the vision fly when you stand in front of reality” resemble somewhat Jack Spicer’s radio delivery—“I think poems are delivered very much like a message that’s delivered over a radio and the poet is the radio. I don’t think the poems come from the inside at all. Or at least the good ones don’t. You get all sorts of static from the radio, the bad transistors and all of that. But I think fundamentally a poem comes from the Outside. I have no idea where, I have no theological or any other kind of notion of it. Green Martians was the thing I used before. It’s obviously not Martians. But I do think poems are delivered, when they’re good, from the Outside . . .” Recall, too, against Kerouac’s “babbling world tongues coming in,” Spicer’s “Blabbermouth Night” at The Place. Whereat one attempted to sound forth a kind of unrehearsed glossolalic spontaneity.) In the letter to Ginsberg, Kerouac offers up the exemplary “greatest line in On the Road”:

“The charging restless mute unvoiced road keening in a seizure of tarpaulin power . . .” This is obviously something I had to say in spite of myself . . . tarpaulin, too, don’t be frightened, is obviously the key . . . man, that’s a road. It will take 50 years for people to realize that that’s a road. In fact I distinctly remember hovering over the word “tarpaulin” (even thought of writing tarpolon or anything) but something told me that “tarpaulin” was what I’d thought, “tarpaulin” was what it is . . . Do you understand Blake? Dickinson? and Shakespeare when he wants to mouth the general sound of doom, “peaked, like John a Dreams” . . . simply does what he hears . . . “greasy Joan doth keel the pot (and birds sit brooding in the snow) . . .”

“To mouth . . . simply . . . what he hears . . .” (Though in a later—circa 15 April 1955—letter to Neal Cassady, Kerouac writes: “when I wrote On the Road in 1951 . . . I’d not yet learned looseness of talking-speed and was imitating a kind of anxious Dashiell Hammett of Wm. Lee—by the time I had made the great discovery of Sketching, writing fast without thought of words, in that same Fall I’d lost my contact with speech-styles and begun writing in what I write now, a kind of special stylized Proust-like but American private monotone, modern Proust indeed.”) Out of The Book of Sketches: 1952-1957:

Cast out the
devils, & be pure,

—add no lines to the
finished line. Draw
no horizons beyond &
underneath the real
horizon. Blat in yr
brain the bleet sheep
bone—falsify not
the cluckings, the
cluck-tures, in yr.
drooly brain, brain
child & Babe of
Sweat & Folly. This
your final body, final
shame, last vanity,
greatest indulgence,
greatest farmiture,
& boon to Man,
kind literature.

At the end of a
meaning is a tangent
of brain noises,
avoid them &
finish where you
finish

Surrendering to the purity of what Coolidge calls “itch scratch.” (See, too, Spicer’s proximity of “A noise. / It annoys . . .” in “The Book of the Death of Arthur.”)
Posted by John Latta at 7:44 AM