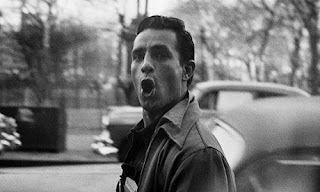 Jack Kerouac, out of a 24 June 1949 letter to John Clellon Holmes, recalling a childhood stunt of promoting “a six-fight boxing card in the yard of a parochial school” (starring one “Iddyboy”—“a huge moronic French-Canadian built like a bull”) with “Lowell boyhood buddy George Apostolos”—the lines coming hard after Kerouac’s defiant emphatic against writing’s usual explanatory lockdown, “I chose the Rattling Trucks, where I don’t have to explain anything, and where nothing is explained, only real. REAL REAL, see? Shee?”:

Iddyboy was in the main bout. Geo. and I went through many crazy preparations to be his “seconds” in the ring, that is, we got striped polo-shirts, cigars, derby hats, pails, sponges, blackjacks, everything to look the part as we had seen it in B-movie boxing pictures. We were going to really give him the works in his corner; splash water, puff on cigars, jam the mouthpiece in his teeth, swagger, lurk, dart in and out of the ropes, count money. George (to show you his utter and complete wonderful madness) was even going to imitate the sound of the warning buzzer ten minutes before the round. You’ve heard those on the radio. “B-a-a-a-a-a-a-!” Only George used to make this buzzer sound last twenty seconds. “Ba-a-a-a-a-a-a-a-a-a-a-a-a-a-a-a-a-a-a-a-a-a-a-a-a-a-a-a-a-!" even until the round started.
Iddyboy knocked out his adversary in .21 seconds of the first round and there we were, no chance to perform before a screaming mass of children. I remember this with amazement. Why did we want to do this? What is meant by “Ba-a-a-a-a-a-a-a-a-a-a-a-a-a-a-a-a-a-a-a!?” Why does Ginsberg refer to Blake’s “Visions of Beulah” [sic] as “Beulaaaaaaah”? What is Rabelais talking about in his Crazy-Book? And the Decameron? What got into Céline when he wrote the first chapter of “Installment” which ends with him lifting his mother’s skirts and roaring with rage? What is Shakespeare talking about when he has those mad servants singing crazy little jingles? Or Lear’s fool?
You shee, there’s something to it.
All my serious passages in “On the Road” (and in Town & City), as I re-examine them, turn out to have this crazy “Ba-a-a-a-a-a-a-” sound—

Allowing the upsurge of the essential babble, the usual explanatory cranks ceasing to turn, ratiocinatory tumblers stuck, the various indefatigable high keen and hump of pure sonic whine revved and baa-ing in furious unleashed scorn and dignity, the “hone buzz / hum of Vibratos Man- / hattoes in Million / blowers humming in / the Void Wait Time . . .” “Just letting it go on”: what Clark Coolidge so brilliantly calls “fresh solids of the just heard”:

Pressure off words so and collide in and he hears them in mind as if spoken by another. Words, then, are fresh solids of the just heard. And a line by Kerouac: “infantile pile-up of scatological buildup.” lncreasing density turns the mind-ear away from impulse of remembered image toward sound as material for the making. Then Kerouac says, in Old Angel Midnight: “The total turning about & deep revival of world robe-flowing literature till it shd be something a man’d put his eyes on & continually read for the sake of reading & for the sake of the Tongue & not just these insipid stories writ in insipid aridities & paranoias bloomin & why yet the image—let’s hear the Sound of the Universe, son.”

Out of Coolidge’s Now It’s Jazz: Writings on Kerouac & The Sounds (1999). Pertinent, too: Kerouac’s late (1967) mulling the “pretty strange old news” of spontaneous “babble” in “The First Word,” wherein he quotes Mark 13:11—“Take no thought beforehand what ye shall speak, neither do ye premeditate: but whatsoever shall be given you in that hour, that speak ye: for it is not ye that speak, but the Holy Ghost.” And adds: “Mozart and Blake Mozart and Blake often felt they weren’t pushing their own pens it was the ‘Muse’ singing and pushing.” And:

. . . I’d gone so far to the edges of language where the babble of the subconscious begins, because words “come from the Holy Ghost” first in the form of a babble which suddenly by its sound indicates the word truly intended (in describing the stormy sea in Desolation Angels I heard the sound “Peligroso” for “Peligroso Roar” without knowing what it meant, wrote it down involuntarily, later found out it means “dangerous” in Spanish)—I began to rely too much on babble in my nervous race away from cantish cliches, chased the proton too close with my microscope, ended up ravingly enslaved to sounds, became unclear and dull as in my ultimate lit’ry experiment “Old Angel Midnight” . . . There’s a delicate balancing point between bombast and babble.

With that, not exactly recanting a thing. Coolidge, quoting out of Old Angel Midnight:

Oddly now recalling my own babble-tilt in writing the longish “Fragging” (Rubbing Torsos) circa 1972, language undergoing a strange sort of parturiency, turning against the continuum of its own desires, seemingly of its of its own accord:

Did that come out of Kerouac? I’d certainly read On the Road, though not, I think, much of anything more. One other possibility: the O’Hara of “Easter,” of “Second Avenue.” Some inchoate sense of longing to make language break into pieces, that something other—whole, shining, different, “new, naked, total”—might emerge . . .
Posted by John Latta at 6:57 AM