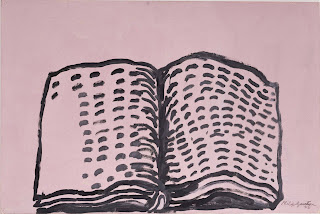 As Stein has most clearly & accurately indicated, Words have a universe of qualities other than those of descriptive relation: Hardness, Density, Sound-Shape, Vector-Force, & Degrees of Transparency / Opacity. I am attempting to peer through the lines into this possible WordArt Landscape, work within it & return with Wordscapes, WordObjects to light & refresh the mind so currently overloaded with centuries of medial Language-Tape.

I think of Coolidge’s seemingly offhanded remark somewhere in The Crystal Text (1986): “What is / a word’s name?” The too rarely bruited about namelessness of the namer. See, too, Coolidge’s remarks to Philip Guston (out of the 1972 “Conversation with Clark Coolidge”) in the Coolidge-edited Philip Guston: Collected Writings, Lectures, and Conversations (2011):

There’s the recognition of naming with words, which has become so facile that it’s the shrug. I mean, we’re in an information age. What we want from words is the information. To me, the word is magic. If you say book and then you keep looking at the word, or sounding the word in your mind, your realize that the word has a lot of qualities that aren’t just a matter of a simple exchange . . . In early times, we’re told that there were only certain men who were allowed to speak certain words, because those words were absolutely evocations of something that only existed at that moment. They had this magic quality. And that’s what I want to get.

And, in a reprise of the “peer through” motif:

The words themselves are masks . . . The word book, let’s just say that What has that got to do with the real book really? . . . It’s booooook. Like in Beckett’s Krapp’s Last Tape, he takes the spool of tape and he says, “spoooooool,” and he says it over and over again, so it’s like an incantation . . .*

Guston says: “You’re talking about the space between the thing and the word, which we have invented.” And a marvelous exchange proceeds, only to conclude that it’s out of that gap, that resistance to making thing and word adhere that art arrives:

CC:   Yeah. When we’re naming something we’re really masking it, in a sense . . . Because we’re using this word which doesn’t relate to it, except by acceptance of a meaning. But this thing, this mask, what is it? . . .

CC:   Which, to further confound it, isn’t what you want to do anyway.

PG:   Of course not. I know it. But I would say that the frustration is a crucial ingredient here.

Coolidge, in Mine: The One That Enters the Stories: “Writing is impossible, the words are all there. Attention to a word and it veers you off any thought.” And: “The words advance to a thoughtlessness velocity void. I wish I could dirty them as one can paint.” Or words animated, vociferous, negligent, crass. (Somewhere in Own Face, the line: “I look at the smell of the word.”) Out of Mine: The One That Enters the Stories:

Foghorn wants in here, and in addition wants the word versimilitude attached. But something scratches me, same root as verse?, so I check in the dictionary. Turns out it’s verisimilitude, very. At home with the wrong root, all these years. Or one of those words that hang around, you even use without knowing the meaning of, having always been meaning to look up, and when you do. Wonderful when they turn out the opposite of all thought. As if love shared its birth with loaf.

Or the cartoonery and mock Platonism of—

When I can not think of the words, the words do not avail themselves of me. I look out of the window and see a windward tree. I sometimes think the words are beings who absent themselves, as why should they not have puzzles of their own to trace. Then am I locked in a mine and the words are leagues beyond that wall-face, or banister, Roger Bannister tiny in the distance and running away . . .

Nothing to say, not a squeak. What’s a year now? The sour cud and the iron stool. [Pause.] Revelled in the word spool [With relish.] Spoool! Happiest moment of the past half million. [Pause.] . . .