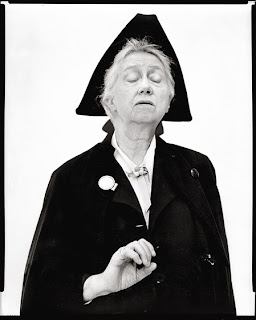 Marianne Moore, out of The Dial, in 1926, under a line by Quintilian—“Quicquid loquemur, ubicunque, sit pro sua scilicet portione perfectum . . .” meaning “Whatever we may say, and wherever, may it be perfect, at least according to its own kind . . .”—warning against the rampancy of writerly pretense:

To exclude the speciously attractive, is difficult. The ideal director of a “zoo,” we are told by Mr. William Hornaday, must at this time when tempted to “take on” mammals, birds, and reptiles, be a master in the art of refusing. The avowed artist must also, unless we are to have fads rather than individuality, be an artist in refusing. In each phase of art, interrelated influences of technique are apparent. The writer, however, seems in certain respects, either more pridelessly or more recklessly than others, susceptible to current cleverness. Much as the victim of the fashionable couturier participates in successive epidemics of cut and color—of shutter green, serpent blue, or Venetian fuchsia—of the wet seal coiffure or the powdered wig, the sciolist subscribes to the tyranny of timeliness, of delightful dubiety, of what is acute or effective. Imagism, the hokku, the coon song, the story true-because-I-have-lived-it, a morality of immorality, significantly concocted equine unselfconsciousness, these several modes have found prompt adherents.

Sciolist: “a pretender to knowledge, a conceited smatterer.” Coleridge warns in the Biographia Literaria (1817): “for as long as there are readers to be delighted with calumny, there will be found reviewers to calumniate, and such readers will become, in all probability, more numerous in proportion as a still greater diffusion of literature shall produce an increase of sciolists, and sciolism bring with it petulance and presumption.” And Swinburne, in A Study of Shakespeare (1880), uses the term repeatedly, writing, say, of the “preposterous pyramid of presumptuous commentary . . . reared by the Cimmerian speculation and Bœotian “brain-sweat” of sciolists and scholiasts” around Shakespeare’s sonnets, or of “the generally baseless and delusive opinion of self-complacent sciolism.” Not a thing new to the current “age.” Scrupulosity, restraint, grace, integrity, refusal of the usual propensities, skeptical of the merely prevalent: that’s Moore. In The Dial, in 1929, quoting Kenneth Burke, recipient of The Dial Award (“The artist, as artist, is not a prophet; he does not change the mould of our lives: his moral contribution consists in the element of grace which he adds to the conditions of life wherein he finds himself . . .”), and adding:

The opinion of the skeptic that the artist can thrive only under the most favorable conditions is often shared by the artist; but discipline under provocation, an integrity of confident expectation, the refusal to be warped by misadventure, are not infirm refutations.

In The Nation, in 1936, in a piece called “Courage, Right and Wrong,” reviewing both James Laughlin’s New Directions in Prose and Poetry and Alfred Kreymborg and Co.’s New Caravan, Moore writes pertinently:

Judged by our experimental writing, we are suffering today from unchastity, sadism, blasphemy, and rainsoaked foppishness; and since warnings to editors are not heeded, one would like to ask of one’s fellow-writers, Is publication always better for one’s talent than temporarily thwarted ambition? And since we can no longer depend upon the chivalry of editors to protect us against appearing at our worst, must we not achieve our own rigor?

In a late (1953) note reviewing Bryher’s The Player’s Boy, Moore writes: “Fidelity sums it up. Only an unparalleled degree of scruple, historic imagination, and tireless interworking of sources, could have produced this vibrant simulation of a period . . .” And, in a deft (and mordant) note (complete here) concerning John Crowe Ransom’s 1924 Chills and Fevers, Moore heaps up a bulwark against charlatanry:

Unrewarding dissonances, mountebank persiflage, mock medieval minstrelsy, and shreds of elegance disturbingly suggestive of now this, now that contemporary bard, deprive one of the faculty to diagnose this “dangerous” phenomenon to which one has exposed oneself.

Beyond the mountebankery, the “mock,” the “persiflage,” it may be precisely the “shreds of elegance disturbingly suggestive of now this, now that contemporary bard” that cane the contemporary britches best. The imitable hosiery un peu partout, festooning the period’s American trees. Or simulacra of trees.
Posted by John Latta at 6:27 AM