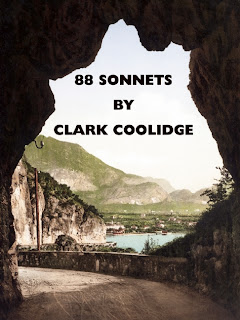 Wholly unfocused, a blotto morn. Caught up by a piece of lingual dross, tangential, beseeching, gustatory, rude. I write: “A theory of dud / recklessness, a portable imprecision / gathered against a more / fortuitous immensity, the way / a Bacchant might, roistering, / slurp at the wine / too noisily for credibility, / or feebly lunge at / the pinecone-tipped thyrsus / with a pretense of / delirium rumpling up a / face made makeshift by / the obvious cunning of / its momentary rebuttal of / desire.” Or I write: “Desire is an ointment / smearing the retractable lens / of the man who’s / burning for a photograph / of the weekend anarchist / who’s energetically gesticulating accompaniment / to a soapbox standard— / it renders the sallow / grease of need agreeable / as a vignette.” Or I write: “Fugue of the disaster / realm, remote particulates of / verve. Suppose I wanted / an ordinary sandwich, would / an ordinary sandwich be / there?” There. Enough of that. Enough writing.

A rebate with every Glynis Johns album
for which there is no box         a mauve man in a white suit
limps along a river railing this will not do
these are lightbulb glass imitations of daylight
to us superiors those spheres make no odds         is this the
cabinet for Cargyle Heavy Liquids?         car leaves
tunnel like never         it’s a sports girl barefoot in makeup
you see her wind her way without         she’s winning though
been taking body lessons but come in         we feature
many varieties of darkness         depths of chest
in one         her car runs on divorce settlements
at which she toils like a sister         nice pointy little
paintings but there’s no floor beneath this one
goodbye         why?         your name suits you like a suit

Haven’t got a feel for much anymore not even
tugs at my straps         lumps in the substance Marge Underhand there tagged my shorts
witless but fundamental we were
grilled by the Great Dead in their time
the show everybody called The Widest Licks in Town
let’s talk         they found a horizontal hexagon
right here in Butter City behind the stationer’s
we went all blubbery         care for a summary?
the braille’s gone cold         give me five
you no longer appeal         the monster’s gone grey
summers from their tins?         there are suggestions
caterpillars gone to seed         an Acropolis dust
this bus emerged from behind Sacramento

Out of Wordsworth’s “Observations Prefixed to Lyrical Ballads” (1800):

The principal object, then, proposed in these Poems was to choose incidents and situations from common life, and to relate or describe them, throughout, as far as was possible in a selection of language really used by men, and, at the same time, to throw over them a certain coloring of imagination, whereby ordinary things should be presented to the mind in an unusual aspect; and, further, and above all, to make these incidents and situations interesting by tracing in them, truly though not ostentatiously, the primary laws of our nature: chiefly, as far as regards the manner in which we associate ideas in a state of excitement.

Pertinent to Coolidge’s various and democratic and turbulent speech-vehemences here. I recall, too, Whitman’s “I permit to speak at every hazard, / Nature without check with original energy.” Speed and audacity and ricochet (see, for example, in “Worst News Possible,” the sonic rocketing between “Butter City” and “blubbery” and “summary” and “summers”). Lines proceed without lag, without presumptuousness. Coolidge’s ear out for speech and its collisions, its unmanageable inevitabilities accommodated (“your name suits you like a suit”). Pieces of wild demotic speechifying bits, of talk’s goofy detritus assembled with canny fondness (see, for example, in “Where’s My Honey?”: “get right down on the floor of the machine to see for yourself / and who did I find sitting in my chambers?         Lord / Coldmouth         Allardyce to you ducks” or in “Juke Farm”: “hello         you qualify for the Life Lodge / no great shakes but you should expect / a life-size photo of Goofy in extremis”). A difference to note: the paucity of “writing” (I am thinking of “unspeakable” lines like—“What morning in what witness and the dialing of the cold. / In wheat we live and the leaving is left over. / The sole Van Velde. The alba. The night when / unknowingly twenty things. The door is a rate. / Whole morning later a date. Whole night . . .” Out of “For Bram Van Velde,” Sound as Thought: Poems 1982-1984). “Let’s talk” indeed. Coolidge’s “Sur Le Route” (with its hellbent misspelled nod at Kerouac) begins with the big voicing of “Orotund for certain” and ends with a fit offhand jocularity: