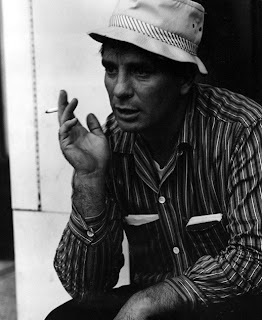 Yellow forsythia rocketing out its stray and unkempt festoonery and here I am pinched with chores. Jack Kerouac, out of a 27 December 1949 letter to Charles Sampas (Selected Letters, 1940-1956):

. . . Lowell, like Winesburg Ohio or Asheville North Carolina or Fresno California or Hawthorne’s Salem, is always the place where the darkness of the trees by the river, on a starry night, gives hint of that inscrutable future Americans are always longing and longing for. And when they find that future, not till then they begin looking back with sorrows, and an understanding of how man haunts the earth, pacing, prowling, circling in the shades, and the intelligence of the compass, pointing to nothing in sight save starry passion . . . strange, is strange, how we be-dot infinity with our thoughts and poor rooftops, and hometown, then go away forever.

And as I sat there brooding on the old, unknown world, I thought of Gatsby’s wonder when he first picked out the green light at the end of Daisy’s dock. He had come a long way to this blue lawn, and his dream must have seemed so close that he could hardly fail to grasp it. He did not know that it was already behind him, somewhere back in that vast obscurity beyond the city, where the dark fields of the republic rolled on under the night.
Gatsby believed in the green light, the orgastic future that year by year recedes before us. It eluded us then, but that’s no matter—tomorrow we will run faster, stretch out our arms farther . . . And one fine morning—
So we beat on, boats against the current, borne back ceaselessly into the past.

The alignment seemingly making Fitzgerald’s “orgastic future” and “dark fields of the republic [rolling] on under the night” sound Kerouacian avant la lettre. (Kerouac makes one small mention of Fitzgerald in a letter writ one year later to Neal Cassady, plumping Cassady’s prose style (its “muscular rush”): “It can’t possibly be sparse & halting, like Hemingway, because it hides nothing; the material is painfully necessary . . . the material of Scott Fitz was so sweetly unnecessary.” Though, too, in a 1962 Life magazine tribute to former Horace Mann classmate Eddie Gilbert, Kerouac makes the oddly salient remark: “Nobody’ll ever know America completely because nobody ever knew Gatsby, I guess.”)

And merely to record—why I persist with the “Notebook” title—a pertinent entry out of Søren Kierkegaard’s Diary:

It is quite true what Philosophy says: that Life must be understood backwards. But that makes one forget the other saying: that it must be lived—forwards. The more one ponders this, the more it comes to mean that life in the temporal existence never becomes quite intelligible, precisely because at no moment can I find complete quiet to take the backward-looking position.

Dated 1843. My thanks to W. C. Bamberger for alerting me to that, its vicinity to Walter Benjamin’s lines regarding the angel whose “face is turned towards the past” out of “On the Concept of History” (1940): “. . . a storm is blowing from Paradise and has got caught in his wings; it is so strong that the angel can no longer close them. This storm drives him irresistibly into the future, to which his back is turned, while the pile of debris before him grows toward the sky.”
Posted by John Latta at 7:06 AM