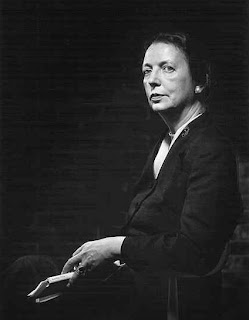 Marianne Moore, plucking the ineluctable—though imprecisely, she records it thus: “Loose form must have beneath, a groundswell of energy”—out of Louise Bogan’s Selected Criticism (1955). Bogan’s lines read: “Loose form and the continually changed image must have beneath them—or rather, must rise from the very existence of—a ground-swell energy, wildness, and ferocity in the poet.” (Recalling, inevitably, Jack Kerouac’s “wild form” balancing act, that “irrational lust to set down everything I know—in narrowing circles around the core . . .”) Bogan’s writing about the poetry of Paul Éluard, Dada, and the thwarting of its possibilities under the subsequent “marching orders” of the Surrealists:

Dada, soon dead and denounced by Surrealism, was, in its beginnings, a far more vigorous assault against logic and the weight of bourgeois ideals than Surrealism, fixed, humorless, and from the beginning out for the dead-end effects of madness and mystification. Symptomatic of post-War derangement, hysteria and despair, Dada nevertheless contained elements of control over and insight into its aberrations. Its working resembled the forms of hysteria, but it was the hysteria of an intelligent living entity suffering from shock. It never developed the paranoid symptoms of Surrealism. It was able to laugh at its own jokes, be cynical with its own cynicism and cruel to its own sadism, and its dogmatic and persecutory symptoms were mild, if they existed at all. It found room for Max Jacob’s macaroniques and bold parodies, and for Éluard’s pathos. Surrealism, on its first appearance, immediately showed signs of a sobering-up process. It was announced by a call to order, disguised as a manifesto for more freedom. Its championship of automatism, its great show of dives into the depths of the subconscious and flights into the empyrean of le merveilleux were accompanied by a reciprocal tendency to law-making, litany-singing, and the issuance of marching orders. Breton’s litany on “the marvelous” might be set to four-four time: “Le merveilleux est toujours beau, n’importe quel merveilleux est beau, il n’y a même que le merveilleux qui soit beau.”

“A call to order, disguised as a manifesto for more freedom.” How rapidly (and cynically, and humorlessly) the current regime’s found its railing dogmatic niche. One need only turn to the remarkably opportunistic—how is it that a whole institution might suffer such sycophancy, such greasily blind servility to “this year’s model”?—pages of Poetry in order to read the newest orders: “No more lines on the luminescence of   light, of   whatever variation. / No more elegies of youth or age, no polyglottal ventriloquism . . .” Ending: “No more retinal poetry.” Vanessa Place, doing an assignment (to “update”—such is Poetry’s piteous preoccupation with its own irrelevance—Pound’s “A Few Don’ts by an Imagiste,” the Pound who wrote, luminously: “The book shd. be a ball of light in one’s hand.”) Place’s is an assault precisely against attending, that stretching out towards the physical world of human, too human energies, and a smarmy paean to sightlessness, to the mechanical, to the cleansed. No burrs, no dirt. Nothing raw, nothing banal, nothing unintended, nothing reversed. Nothing impious, nothing embroidered, nothing metaphorical. One recalls Stevens’s “No Possum, No Sop, No Taters”: “Bad is final in this light.” And: “It is here, in this bad, that we reach / The last purity of the knowledge of good.” And—here in the plumply human roseate cloud surroundings where we are happy to find ourselves “merely circulating”—it’s that final purity that is so troubling.
Posted by John Latta at 7:02 AM