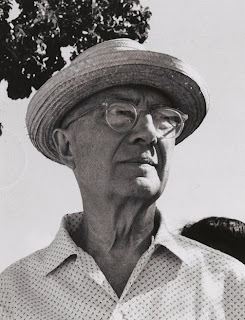 The morning sky’s celadon tint, a grey-green intercedence. (“Such tink and tank and tunk-a-tunk-tunk / . . . something something . . . / A jovial hullabaloo among the spheres.”) The weekend shot by “motoring” here and there. (Britishism fault of reading, in distracted and unsustainable spurts, Nabokov’s King, Queen, Knave: “Weaving his way among the ramparts of sand that surrounded each bather’s ephemeral domain, hurrying to nowhere in order to prove by a great show of haste how much his merchandise was in demand, an itinerant photographer, ignored by the lazy crowd, walked with his camera, yelling into the wind: “The divinely favored, der gottbegnadete artist is coming!” Irony heaped up against irony.) Consequently, browsing a prefatory chapter of The Poetry of Ezra Pound, Hugh Kenner’s lines seem oddly Nabokovian: arch, piercing, capable of deflating with a sentence or two any ruthless artifice ballooned up big and unyielding. “We have not to deal with a tense fellow talking in epigrams. The reader is not subjected to that brow-knotting strain, invariably betraying itself in incompetent rhythms, which in lesser work admonishes him to keep screwed to the sticking-place his awareness of assisting at a hushed rite among the eggshell teacups of poesy.” (Comparing, with blitzkrieg certainty, the “incomparable assurance” of Pound’s verse with the dainty lucubratory stitches of the usual doings.)

Plans without executory means. (“Means” meaning “time,” that forlorn and nugatory “item” in itself.) Plans ambushed by the yack of demanding neighbors. (A study of sentences in the offing.) William Carlos Williams (out of 1932 letter to Kay Boyle, written for Contact):

But what remains? For myself, I have written little poetry recently. Form, the form has been lacking. Instead I have been watching speech in my own environment from which I continually expect to discover whatever of new is being reflected about the world. I have no interest, as far as observation goes, in the cosmic. I have been actively at work (if such sketchy trials as I employ can be called such) in the flesh, watching how words match the act, especially how they come together. The result has been a few patches of metrical coherence which I don't as yet see how to use — but they seem to run to groups of lines. Occasionally they give me the feel of authenticity. . . .

I have been working with prose, since I didn’t know what to do with poetry. Perhaps I have been in error. Maybe I should be slaving at verse. But I don’t think so. Prose can be a laboratory for metrics. It is lower in the literary scale. But it throws up jewels which may be cleaned and grouped.
I don’t think any poetry ever originated in any other way. It must have been inherent in the language, Greek, Latin, Italian, English, French or Chinese.
And this should blast that occasionally pushing notion that the form of poetry (as that of any art) is social in character. Such an opinion is purest superficiality. The form of poetry is that of language. It is related to all art first, then to certain essential characteristics of language, to words then and finally to everything among all the categories of knowledge among which the social attributes of a time occur. The work of Einstein also merges into it, hardly a social phenomenon. It is not formed “like” the society of any time; it might be formed in a manner opposite to the character of the times, a formal rigidity of line in a period of social looseness . . .
This is difficult ground. One might sink in it. All that I wish to point [out] is that poetry is related to poetry, not to social statutes. It will, nevertheless, make its form of what it finds. And so does seem to be a social eye. It is nothing of the sort. It remains itself. It remains related only to poetry. Much more could be said about this. I myself can be accused of contradictions. Possibly I have contradicted myself . . .

Storage notes. Notes in reserve. A note put up, or put by, against scarcity. “The line must, as a minimum, have a well-conceived form within which modification may exist. Without this internal play upon the stops, it cannot achieve power . . .” What is a sentence? (Fenollosa, in “The Chinese Written Character as a Medium for Poetry”: “I wonder how many people have asked themselves why the sentence form exists at all, why it seems so universally necessary in all languages?” And the twin bulwarks against the usual explicatory concomitance: “No sentence is needed to make one’s meaning . . . clear.” “No full sentence really completes a thought.”)
Posted by John Latta at 6:45 AM