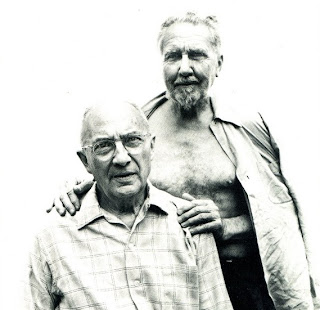 Up at four a.m. By six the occasional solitary spigot-turn of bird-song’s gone washy and general, a “lavish magniloquence” replete and aerated with incidentals, though with a single high-perched cardinal’s whoit-whoit dominant. A couple of chipping sparrows competing left and right, ratcheting up the overlap. Burr-y robins in the “yonder” oak reaches. By seven, I am fettered by the impertinent lassoings of rapacious fatigue, no capacity left for making “a raid on the inarticulate / With shabby equipment always deteriorating / In the general mess of imprecision of feeling, / Undisciplined squads of emotion . . .” Und so weiter. The tendency is to fub the whole birdy archipelago with an unsluiced superfluity of words, unregulated, miasmic, smothery sop. Pound (Gaudier-Brzeska):

And in the midst of these awakenings Italy went to rot, destroyed by rhetoric, destroyed by the periodic sentence and by the flowing paragraph, as the Roman Empire had been destroyed before her. For when words cease to cling close to things, kingdoms fall, empires wane and diminish. Rome went because it was no longer the fashion to hit the nail on the head. They desired orators . . .
Quintilian “did for” the direct sentence. And the Greek language was made an excuse for more adjectives . . .

Usual repeated complaint against the slurry of “rhetoric and rhetorical thinking” (what Pound calls “a habit of defining things always ‘in terms of something else’,” and “the art of dressing up some unimportant matter so as to fool the audience for the time being”). Rampant the exemplary timber, unchecked the iteratory chore. In a lengthy letter to Iris Barry (27 July 1916), Pound chases off any hint of the aimless nugacious:

The whole art is divided into:
a. concision, or style, or saying what you mean in the fewest and clearest words.
b. the actual necessity for creating, or constructing something; of presenting an image, or enough images of concrete things arranged, to stir the reader.
Beyond these concrete objects named, one can make simple emotional statements of fact, such as “I am tired,” or simple credos like “After death there comes no other calamity.”
I think there must be more, predominantly more, objects than statements and conclusions which latter are purely optional, not essential, often superfluous, and therefore bad.
Also one must have emotion or one’s cadence and rhythms will be vapid and without any interest.
It is as simple as the sculptor’s direction: “Take a chisel and cut away all the stone you don’t want.”

(Narrowing down—in “Cavalcanti”—to a precise terminology, no tremor, no fugacity, no wobble. No “schoocheon of armes wrowght on payste.” Pound: “Unless a term is left meaning one particular thing, and unless all attempt to unify different things, however small the difference, is clearly abandoned, all metaphysical thought degenerates into a soup. A soft terminology is merely an endless series of indefinite middles.”) How square any of that, its finicky jut of portent and surety, with the current Doxa of the writerly (Barthes’s scriptable) text? How square Pound in the lineage that leads to L=A=N=G=U=A=G=E? Barthes (S / Z):

The writerly text is a perpetual present, upon which no consequent language (which would inevitably make it past) can be superimposed; the writerly text is ourselves writing, before the infinite play of the world (the world as function) is traversed, intersected, stopped, plasticized by some singular system (Ideology, Genus, Criticism) which reduces the plurality of entrances, the opening of networks, the infinity of languages. The writerly is the novelistic without the novel, poetry without the poem, the essay without the dissertation, writing without style, production without product, structuration without structure.*

If there’s a handy rejoinder to Pound’s harrumphing certainty (“saying what you mean in the fewest and clearest words”), it’s William Carlos Williams’s writerly feint and acknowledgment in one of the notes found in The Embodiment of Knowledge:

“Realism” has one inevitable catch in it: it is not susceptible to writing, to being written as a transcription of events or even facts (a thing philosophy has never dared envisage under penalty of eschewing writing altogether). To transcribe the real creates, by the same act, an unreality, something besides the real which is its transcription, since the writing is one thing, what it transcribes another, the writing a fiction, necessarily and always so.
The only real in writing is writing itself . . .

* Hugh Kenner, in The Poetry of Ezra Pound (1951), detailing a Renaissance split between Senecan and Ciceronian stances toward rhetorical artifice (“The Senecan utilized rather the aphorism than the periodic sentence, and so exalted the sage rather than the orator . . . It is this tradition that opposes the Jonsonian spareness, his witty flexibility of tone rather than trope, to the lavish magniloquence of Marlowe. It is in this tradition that Bacon eschews the appearance of system in the delivery of knowledge, since aphorisms encourage men to enquire further . . .”), offers some lines regarding the merits of “writing in aphorisms” (opposed to “writing in method”) out of Bacon’s Advancement of Learning that sound rather akin to the claims of Barthes’s “writerly text.” Kenner (quoting Bacon):

For first it trieth a writer whether he be superficial or solid: for aphorisms, except they should be ridiculous, cannot be made but of the pith and heart of sciences: for discourse of illustration is cut off; recitals of examples are cut off; discourse of connexion and order is cut off; descriptions of practice are cut off; so there remaineth nothing to fill the aphorisms but some good quantity of observation. . . . Secondly, methods are more fit to win consent or belief, but less fit to point to action; for they carry a kind of demonstration in orb or circle, one part illuminating another, and therefore satisfy. But particulars being dispersed do best agree with dispersed directions. And lastly, aphorisms, representing a knowledge broken, do invite men to inquire further; whereas methods, carrying the show of a total, do secure men, as if they were at farthest.