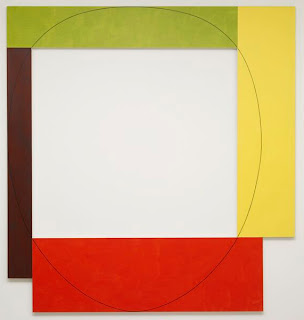 Dashed to mental smithereens by the peppy bravura of sleeplessness and its cohort anxiety. So that: the usual assemblings flit off, fugacious as scent, volatile as deceit. Sunlight clobbers a metallic roof and pools, bayonet-shaped. What, I think, is a unit? Ashbery: “A year away from the pigpen, and look at him. / A thirsty unit by an upending stream . . .” Or there’s Ammons (in Sphere) descending briefly out of “fluxions, radiations, / drifts, malleabilities” to note “the widest sweep of / unity taking definition and meaning from the unit” (only to be interrupted by the intrusory unitlessness of energy unleashed, rearranging the dynamo of momentary assembly: “the pheasants / neck-nicking walk out of the snowthickets and explode over // the white paling fence away . . .” Or there’s Susan Howe’s succinct perplexities effervescing up out of The Midnight (2003):

. . . A sentence is one unit but inside are two separate syntactic units. There! Scrim for the cold strange sand ceiling. During the nineteenth century old books were often sold to tailors for measures, and to bookbinders for covers. Well I don’t buy it. This thinnest blank sheet should be mute but it’s noisily nondescript. The interleaf shelters the frontispiece though it’s flimsy and somewhat slippery, like self-deceit. And this says something about skepticism by forcing readers to ask what choices may be rationally made and how such choices are possible, or conversely, how choice may be eschewed. This does not mean omitting truth while lying. Nor is it about yawning when people are listening.

Clarity, I think, is a pallid horse, nubilous and rideable throughout the drabbest kingdom’s woodlands. (I think of Nabokov “tidily” copying the fresh draft of a novel “with a fountain pen in a fat and sturdy exercise book or ledger” and burying it in flurries of addenda (“a chaos of smudges and scriggles”): “Then an orgy of new corrections would blot out by degrees all the pleasure of specious perfection. A third phase started where legibility stopped.”) The constant dynamo of the page, the incessant neck-nicking walk out of its lie of cohesion (its “reproachable diminuendo”), the sunlight is no bayonet, the bird is “not incontrovertible.”

A counterthrust. Marianne Moore, in 1966: “Always, in whatever I wrote—prose or verse—I have had a burning desire to be explicit; beset always, however carefully I had written, by the charge of obscurity.” And, in 1951: “There is no room for furious virtuosity. A master axiom for all writing, I feel, is that of Confucius: “When you have done justice to the meaning, stop.” That implies restraint, that discipline is essential . . . I have a very special fondness for writing that is obscure, that does not quite succeed, because of the author’s intuitive restraint. All that I can say is that one must be as clear as one’s natural reticence allows one to be.” And: “My observations cannot be regularized. I believe that verbal felicity is the fruit of order and diligence and the refusal to be false.” And, in 1926, out of The Dial:

In this age of curiosity, of excursiveness, of discursiveness, one is impelled by the thoroughness even more than by the virtuosity of Doctor Johnson. One may say of him as he said of Sir Thomas Browne, that he “used exotick words which if rejected, must be supplied by circumlocution; . . . in defense of his uncommon words and expressions, we must consider that he had uncommon sentiments.” “I’ll mind my own business,” said Doctor Johnson, and accuracy was apparently part of that business. He felt, says Boswell, that if accuracy is to be habitual, one must never suffer any careless expression to escape one or attempt to deliver thoughts without arranging them in the clearest manner. In alluding to “a certain female friend’s ‘laxity of narration, and inattention to truth,’ ‘I am as much vexed (said he) at the ease with which she hears it mentioned to her, as at the thing itself . . .

And if, muzzy with indelibles, one longs to kite the sublime fatuous undeliverable up into the stiff breeze of the age’s supposed excursiveness . . . ? John Dee: “an Vnit, is that thing Mathematicall, Indiuisible, by participation of some likenes of whose property, any thing, which is in deede, or is counted One, may resonably be called One.”
Posted by John Latta at 7:37 AM