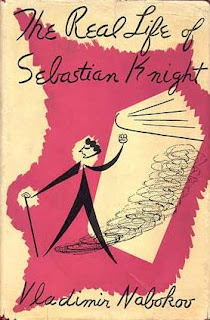 Nabokov, out of The Real Life of Sebastian Knight (1941). Being exemplary of Sebastian Knight’s “queer way . . . —in the process of writing—of not striking out” words replaced by others. And one thinks of Gertrude Stein’s “portraits” of Matisse and Picasso—originally printed in 1912, in Alfred Stieglitz’s Camera Work—“doing,” Stein says in Lectures in America (1935), “what the cinema was doing, . . . making a continuous succession of the statement of what that person was until I had not many things but one thing . . .” How the movie camera’s process is one, precisely, of “not striking out.” Stein (Lectures in America):

Each time that I said somebody whose portrait I was writing was something that something was just that much different from what I had just said that somebody was and little by little in this way a whole portrait came into being, a portrait that was not description and that was made by each time, and I did a great many times, say it, that somebody was something, each time there was a difference just a difference enough so that it could go on and be a present something.

And, out of Stein’s portrait of Matisse:

Seemingly a paucity of Nabokov / Stein contingency, or contiguity. Is it pertinent to note that Nabokov’s brother Sergei, in Paris in the ’thirties (Nabokov left Berlin for Paris in 1937), “had entered the social circles of some of Paris’s most prominent artists, including Ballets Russes founder Sergei Diaghilev, novelist and rising filmmaker Jean Cocteau, Edith Sitwell, and Gertrude Stein”? That out of Andrea Pitzer’s The Secret History of Vladimir Nabokov (2013). Too, there’s Pitzer’s note of Sergei’s stutter. The narrator V. of The Real Life of Sebastian Knight is the half-brother of the Russian-born, English novelist Knight, of whom he is writing a biography. Is Nabokov’s portrayal of Sebastian Knight’s Stein-like “continuous succession” method of composition merely a cruel joke about stuttering?
Posted by John Latta at 7:19 AM