Under “Bores,” W. H. Auden cops a Chekhov line for A Certain World: A Commonplace Book: “The most intolerable people are provincial celebrities.” Which probably explains a lot about poets, their high dudgeons, their overweening publick traumas, their presumptuous caws and continual calls. (Lascano Tegui, in On Elegance While Sleeping, succeeding a fit rumbustious lyrical outburst, wrought up “like something trapped in an aquarium,” finds the just-writ page “inexplicable in the diary of my life”: “I’ve written it tenderly, as though I was once in love. It seems like sacrilege to include it as part of this intimate experiment, in which we’re testing the consolatory effects of speaking badly about others to ourselves.”) Ah, the small and grizzled world, its torts and torsions, its occasional marvels and wonders—is it feign’d religiosity or my heart tearing itself into “a bust’d fleshy contrivance be-sinew’d and raw” that I sense reading that? Lascano Tegui writes of crowds at nightfall “like herds of boars escaping the purest of women (Diana),” clerks “looking for refuge . . . unbuttoning their pants and pissing at random against the walls and trees”:

They wait for accomplices who never show up and who they suppose might be disguised as a worker heading home for the day, a bag over his shoulder; a wisp of a girl running errands; or a boy coming home late from school, wrapped in the narrow cape some cheap tailor made as skimpy as possible. The boy’s hands are purple from the cold, and the armies of the perverse see these swollen, miserable hands as exotic fruits. The first fruits of a midday harvest.

Later, in a “black landscape” smelling “of hay, of manure, brick ovens, and recently discharged chemicals,” a man approaches “leading two large white horses in worn halters.” Behind him, “hurrying to keep up”: a cross-eyed man carrying a zinc box. And:

In a pit, among the garbage heaps, a woman who was really still a girl was poking at the ground. She was burying a biscuit tin containing six playing cards with a pin stuck through them, a piece of lodestone, the hearts of two doves, and a cameo of her seducer.

She is, according to the Viscount, “a happy and religious creature.” Always that fit of substance (“the heart’s rags pull’d up about it”). Gottfried Benn, in a letter to Dieter Wellershoff (22 November 1950), regarding “writing that refers to nothing but itself”—“. . . language that neither wants to (nor can) do anything but phosphoresce, incandesce, overwhelm, stun. It celebrates itself, it drags what is human into its subtle but also powerful organism, it becomes monologue, indeed monomania.” (Roberto Calasso talks briefly about Benn in a chapter call’d “Enamel Scar” in The Forty-Nine Steps. Benn: “. . . a quick look, just leafing through sometimes produces a slight intoxication.” A disfiguring half-ass’d method, no doubt, though one that results in a constellatory prose, “a prose like the segments of an orange.” I think of how strenuously I prefer the half-finish’d “study,” the sketch, to the “done done”—an awkward phrase making homage to Pound’s “And I do do it.” It is, remittingly, akin to what I wave about here quasi-daily, my giant fennel stalk with its seed-splashing pinecone “head.” My thyrsus, my thisness.) Benn’s succinct dictum: “For one striving to give expression to one’s inner self, art is not something relevant to the social sciences but something physical like fingerprints.” (That bluff unchangeable heart.) What Benn is muddling: that merchant’s revery of a thing call’d “absolute prose” (“I have devoted various studies in my essays to this theme of absolute prose. I found the first signs of it in Pascal, who speaks of creating beauty through distance, rhythm, and intonation, ‘through the recurrence of vowels and consonants’—‘the oscillating number of beauty,’ he says once, and ‘perfection through the order of words.’”) Benn’s prose, the doctor Rönne at the end of Gehirne (“Brains”), a 1914 piece carrying the epigraph, “If words can be said to lie, it might be thought that they were doing so here.” Rönne, too, like Lascano Tegui, preoccupy’d with hands (“Often when he got back to his room from one of these rounds he would twist his hands this way and that and look at them. And once a nurse observed him smelling them or rather going over them as though testing their atmosphere, and she watched him putting his lightly cupped hands together, little finger to little finger, then pressing them open and shut, as though squeezing open the halves of a large, soft fruit or bending something in two . . .”), a prose of one man’s finger’s oily leavings, smudges with all the subtance of a whorl:

Look, I held them in these hands of mine, a hundred, maybe even a thousand of them; some soft, some hard, all read to dissolve; men, women, with crumbling flesh and full of blood. But now I am holding my own in my hands and I can’t stop probing into the limits of my possibilities. Supposing the forceps had pressed a little harder here when I was born? Supposing I had been struck on the head again and again on the same spot? What is it about brains? I always wanted to float free in the air like a bird soaring up out of a ravine; yet I am still apart, walled in by crystal. Please now, let me through, I am taking flight once more—I have been so weary—I am borne aloft by wings—with my sword of blue anemones—in the falling rays of the mid-day sun—in ruins of the south—crumbling cloudbanks—skulls turning to dust—foreheads collapsing at the temple.

Something autochthonous about that, the skitter into expressivist “verbal splinters” (Calasso), unvitiated by formal presumptuousness. “Ouch.” 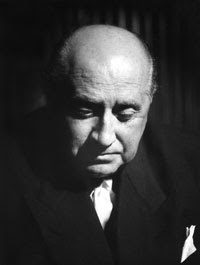