Hardly a week goes by without its fiasco—
The too-earnest hoodlums raking the yard
With gunfire, or the mouthy rebuttals of rascal
Kids to the unemploy’d brutes hired to guard

Them, ex-dope fiends of the plug-
Ugly years that continue to convey indiscreet
Greetings out of the beyond. . . .

Nothing begins like that. End of the week, its grubby sunk particularity pertinacious and awry. The white half-moon bulging, pock’d and swoll’d up, out of the fierce morning blue: a plug of tobacco in its cheek. Too cold for late March. Eileen Myles (out of Inferno): “In a way, poetry really does require failure, because failure produces space. That nobody else wants.” Poking around in El Corno Emplumado #6, I find Thomas Merton’s “After Chuang Tzu,” about a tree call’d the “stinktree”: “The trunk is so swollen, / So knotted, / No one can get a straight plank / Out of it. / . . . / No carpenter will look at it.” Align’d with one’s “speech”: “Big and useless.” (Briefly recalling Thomas Johnson’s journal call’d Stinktree. Out of Memphis and Ithaca. Whence cometh its monicker? And, puttering, I note now how the stinktree is identical to Ailanthus, the tree of heaven, an exotica unloosed in the New World, the tree of the city, its terrains vagues, sprouting up out of any verge of dirt . . .) How continue? Jackson Mac Low reporting in an El Corno letter (18-19 May 1962): “. . . we live on $14 a week unemployment insurance plus government surplus foods. We’ve been living on some fine government curries; government meat, government rice and non-government spices can make some great dishes.” And Clayton Eshleman’s rather contradictory Kyoto note of 22 October 1962:

. . . A great deal of the need to criticize comes from one’s own lack of footing. As one feels the world unsteady, some of this fear can be gotten out by (so-called) alarming others. I think there is always that element in criticism no matter how vital & useful it can be. I don’t believe Walt Whitman ever criticized anyone, not at least the mythical Whitman of notes, prose & early poems (and here we go again . . . !), such was the well of health & love for others, enough in a sense, or too much. And if this weakens Whitman as a poet (he never scares me) it also builds us; the possibility of not needing anyone else, to not depend upon others (for is not this dependence a good deal of the need to attack) but to throw oneself out (as trash and as hero) to what is around, nature, man, which are never empty in themselves . . . your talk about magazines makes me think; perhaps it’s best to forget about reading other magazines & read only what strikes one as great poetry. For a while. There is so much crap in poetry magazines, so much blindness and sheer dishonesty that this pricks one (me, at least) into certain unkindnesses . . .

“To throw oneself out (as trash and as hero).” Or: “To throw oneself out there, to unboundedly entangle.” Puttering, hardly deft. I go looking for a piece by “pianist and poet” David Rattray in The Nation (16 November, 1957), call’d “Weekend with Ezra Pound” (H. D., in End to Torment says how, reading it, “it all came back”):

His hair is now white all over and he is getting bald. He was dressed in tan shorts too big or him, tennis shoes and a loose plaid shirt. His face looks weathered, like that of a man who has worked outdoors all his life. His heavy-wristed hands are coarse and calloused, but the fingernails neatly cut short and square. . . . There was no sign of that flabbiness that comes even to some of the strongest men in their forties and fifties. The Greeks spoke of “old age that unstrings men’s knees,” but as I watched Pound stride up and down, his knees strung taut, his calves bulging like a athlete’s, I thought of some lines from Ramon Guthrie’s poem, “E. P. in Paris and Elsewhere”:

“This is not walking.
This is stalking, pacing
as done by jaguar or ounce
in Zagreus’ days, tracing
the lay-out for the Labyrinth . . .”

Ramon Guthrie (1896-1973), who lived in Paris during the 1920’s after stints with the American Field Service and US Army Air Corps in WWI, end’d up teaching French and French literature at Dartmouth, and writing—to judge by “Ezra Pound in Paris and Elsewhere”—rather Poundian work:

Ezra Pound in Paris and Elsewhere

the loneliness of death came upon me
(at 3 P.M., for an instant)
E. Pound: Canto LXXXII

1.
They nudged “who’s that?”
whenever in the street he,
fur-collared and no hat,
passed like a duke of Moscovy
. . . in the old days . . .
head aetherial
on neck and shoulders verging burly
and profiled like a surly
a somewhat older Ariel
with a streak
of Viking in him
or pre-Attic Greek,

His striking
red-gold beard and mane
curried by gales.
Whiffing centaurs’ trails,
Houyhnhnm,
his gait seemed stamped with the device:
“This is not walking.
This is stalking, pacing
as done by jaguar or ounce
in Zagreus’ days, tracing
the lay-out for the Labyrinth . . .
Cowflops”       (here
a flash too golden for a sneer)
“plotted Boston.”

The brow bull-willed
jutting as if embossed on
Assyrian plinth
where Tiglath killed.

2.
Zagreus, they
are no maenads who gnaw thy bones to-day.
No pipes or cymbals whip a frenzy cold
as a dead snake’s eye.
Orpheus, make no mistake
These cryptogamic bald
neuters are no bacchantes. When
these busy-body scarabs have sucked their glut,
no hell would take you in.
The frowsy slut
you would have breathed
—forsooth—a soul into
has got
her teeth snagged in your jugular.

What Furies it was your delight to hatch
are now superfluous.
What perversities you cultivated
could never match
those pitted now against you.

Against such gloating odds
as these,
there are no gods,
sere Herakles. 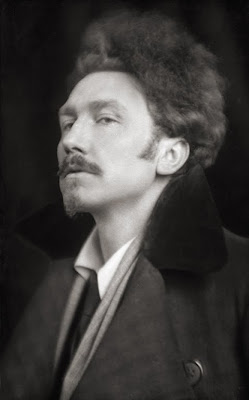