Reading Carla Harryman’s final piece, “The Essay as Noise,” in The Grand Piano #10, I think of John Bunyan’s The Pilgrim’s Progress from This World to That Which Is to Come (1678) with its homely allegorick’d figures Obstinate and Pliable (“Well, neighbour Obstinate, said Pliable, I begin to come to a point . . .”) who, along with Christian, and “being heedless,” fall into a bog (“The name of the slough was Despond.”) Harryman, though heeding nothing so pedestrian as a “point,” avoids despondency through something like self-congratulatory prestidigitation. She offers a story (“or folly,” she says) of (mostly) Memory and History (with Talent, Music and Method’s plus peremptory—meaning mysterious—joinings-in.) Perhaps Harryman’s cue is found in Lyn Hejinian’s earlier remark that “The allegorical is, precisely and ineluctably, nontotalizing. . . . Its logic confines it to wandering. Allegory is the narrative of being at a loss when even loss itself can’t be located.” Thus, “noise” in the signal. Memory, it turns out, is Kathy Acker, History is Lorenzo Thomas. Harryman’s “folly” seems design’d to put the two together—ever triangulating off “Carla,” who’s generally at a loss, dérive-struck (“inconclusive days, meandering companionship, and reprieve from consequential acts”), if not exactly star-struck. Palpable is “Carla”’s awe in regarding Memory, tougher, more commanding: they walk in San Francisco fog-bound “urban space” to “take pleasure in the distortions of street life.” “Carla” notes how “Memory’s black boots, thick soled and buckled on the side, appear a little heavy on her feet, though she does wear them handsomely.” (Later there’s mention of “the clump of Memory’s glamorous boots”: one idly pursues a footwear / Language writing thesis, recalling Tom Mandel’s cowboy boots. Or, more broadly, a “fashion” / Langpo connect—who’d ever forget Watten’s “ox-blood red shirt”? or Silliman’s decadent obsessing over “Project Runway”?) Asks: “Is it Memory who says words and deeds commonly don’t mean shit?” (“Or do they?” is the reply.) Parrots: “the faux simplicity of some of Memory’s sentences.” Reports: brash Memory’s declaring at a talk at 80 Langton Street (“art and public policy”) “art as guerilla warfare” a viable model (adding to Ron Silliman’s “two options, national subsidy or market capitalism.”) Late in Harryman’s story, a curious sort of reverse (“the transitional event of this prose”):

Sometime in the early 1990s, Memory gave Carla the manuscript of My Mother Demonology for airplane reading on a trip to New York. She needed to know Carla’s thoughts on the book. In spite of the superior economic training Memory’s words had claimed for females, Carla would find herself stuck on the self-canceling anti-logics of certain of Memory’s sentences: “Only poetry is rebellion and Rimbaud had gone, rebelled against his inheritance in order to make himself into a businessmen.” Is not the key word here “inheritance” rather than “rebellion”? To what extent did Memory fashion herself as Rimbaud, as one who went against her inheritance and saw herself, rebelliously, as a businessperson? Or was poetry a business, which Memory satirized while seducing her reader into identifying with the author, the anti-poet, as a romantic rebel novelist—and wouldn’t this be “good business” in the post-Beat hipster punk market that produced her books? For Memory, financial and literary inheritance was what enabled her writing. She had forsaken neither her minor economic security nor the literature on her shelves, while her self-canceling satiric, playful, sly, outrageous text was a performance of rebellion.

And, later, post-“airplane reading,” Memory, “anxious about the potential collapse of cultural capital,” calls “Carla,” needing to know what she thinks:

One deadly “yes,” no? Is there some kind of revenge, some comeuppance here. Memory reduced to needy, pleading infantilism? Harryman writes: “The urgency in Memory’s tone over the phone, its expression of a need for normality, paradoxically conveyed something that could not be transmitted as sense.” (Perhaps.) Nonsense therefore. “Nonsense tests patience but it also suspends narrative. It marks the material underpinnings of form showing the promise of rearrangement . . .” (Back to Hejinian’s “narrative of being at a loss.”)

Beyond Memory / Acker, there’s a parallel story of “Carla visiting an elsewhere” (ouch, allegorical pinprick), a place “where Lorenzo, or History, a poet who ‘didn’t go out looking to write poems’ since they ‘simply appeared when it was necessary to write down,’” is teaching. History says: “If we are writers, we need not fear symbols. We need to control them . . . by making them serve us.” (Something Lorenzo Thomas, here become a symbol himself in Harryman’s “folly,” offer’d up at 80 Langton Street in 1981.) The pairing of Memory / Acker and History / Thomas seems to descend out of Harryman’s attendance at “a reading by Memory and History at the Ear Inn on November 11, 1978, twenty years, eleven months and sixteen days before [Memory’s] death and twenty-seven years, four months and seven days before History’s.” Two dead too young. Reading report:

History read first from two translations of the Vietnamese poet Tran Te Xuong (1870-1907) as well as many excellent poems of his own, including “The Fine Clothes of Year Before Last.” Memory, who did not write original text, pilfered Propertius or her finale, a ghoulish dirgelike elegy marked with “Cynthia’s” fury.

And thirty-odd years down the road, “Carla” offers “an abbreviated duet,” a mash-up of the two:

Only fit now There are such things as ghosts
Death does not all things end For the garden,
the carwash,
The ritual of stinking for four days and pale
yellow from vanquished even shades
Escape their graves To solve a problem
That stinks to you to high heaven,
And just in general stinks
You see Jane was seen to lean over bed
Sweating and sleeping
though near the roar of just-buried Broadway
In these shabby clothes

Somewhere along a continuum between harmlessly inert and rather asinine. It is, one supposes, a miniature of the essay “to hand”—Harryman’s “The Essay as Noise”—an essay whose subheadings (““does not permit its domains to be prescribed,” “wants to blow open what cannot be absorbed in narrations,” “reflects a childlike freedom,” “forces the form to make unlimited efforts,” “is not translatable into already existing forms,” &c.) “are derived from Theodor Adorno’s “The Essay as Form” in Notes to Literature.” For, succeeding the “duet” Harryman writes: “Carla was thinking about the essay as form, about the compositional space in which things or friends were joined, where play took form, then, with a quick flare of mental action, devoured portions of a city or the last few decades.” The shrug of inconsequentiality. It’s precisely here the essay fails: how hit a balance between that “quick flare,” the “nontotalizing” dismissal of what’s “joined”—presumably a useful shapeliness, a form—and mere perseverant doodling, a thing whose “logic confines it to wandering”? Harryman (while admitting that “Sense might be a small pleasure one takes from an encounter with opacity”): 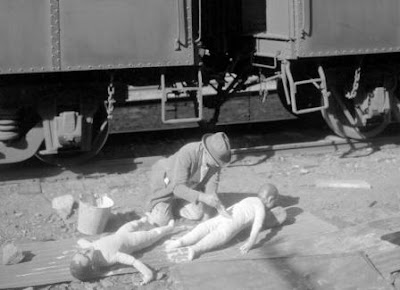 “. . . the material underpinnings of form showing the promise of rearrangement . . .”