The morning a morass: call it “taxing nonsense.” The kind of thing that throws down it precipitants. “Hydrochloric acid and chloride of sodium: ordinary precipitants of silver.” The moon just a sliver—“cut like a swallow wing”—though still a little pot-belly’d in the “perigee-syzygy” aftermath. Ashbery: “We feel we have more in common with a / Landscape, however shifty and ill-conceived, / Than with a still-life . . .” So H. D., writing to Norman Holmes Pearson in 1938 about early work: “I let my pencil run riot, in those early days of my apprenticeship, in an old-fashioned school copy-book written when I could get one. Then I would select from many pages of automatic or pseudo-automatic writing the few lines that satisfied me.” Or, H. D. out of the novel Paint It Today (quoted in Helen Carr’s The Verse Revolutionaries: Ezra Pound, H. D. and the Imagists): “Poetry and the beat and the swallow wings. Large epic pictures bored her, though she struggled through them. She wanted the songs that cut like a swallow wing the high, untainted ether, not the tragic legions of set lines that fell like black armies with terrific force and mechanical set action, paralyzing, or broke like a black sea to baffle and crush.”

H. L. Mencken, reviewing Ezra Pound’s Provença in the Smart Set in 1910, trying to work up a barbaric yawp, saying Pound’s revolt is against “the puerile kittenishness” of the period: “Nine-tenths of our living makers and singers it would seem are women, and fully two-thirds of these women are ladies. The result is a boudoir tinkle in the tumult of the lyre.” Contra Pound’s own poems, full of “arresting and amazing vigor”: “The pale thing we commonly call beauty is seldom in them. They are rough, uncouth, hairy, barbarous, wild. But once the galloping swing of them is mastered a sort of stark, heathenish music emerges from the noise. One hears the thumping of a tom-tom. Dionysos and his rogues are at their profane prancing. It is once more the springtime of the world.”

Pound, in the 1911 “I Gather the Limbs of Osiris”: “As long as the poet says not what he, at the very crux of a clarified conception, means, but is content to say something ornate and approximate, just so long will serious people, intently alive, consider poetry as balderdash—a sort of embroidery for dilettantes and women.” And (Pound in i hate speech duds): “We must have a simplicity and directness of utterance, which is different from the simplicity and directness of daily speech, which is more “curial,” more dignified. This difference, this dignity, cannot be conferred by florid adjectives or elaborate hyperbole; it must be conveyed by art, and by the art of the verse structure . . . Colloquial poetry is to the real art as the barber’s wax dummy is to sculpture.” Somewhat later (in a 1915 letter to Harriet Monroe, the one beginning—in the D. D. Paige-edit’d bouquin—“Poetry must be as well written as prose. Its language must be a fine language, departing in no way from speech save by a heightened intensity (i.e. simplicity). There must be no book words, no periphrases, no inversions. . . . There must be no interjections. No words flying off to nothing. Granted one can’t get perfection every shot, this must be one’s intention.”), Pound’s antic reject of bookishness, how it makes for “the shallow frothy excitement of writing”:

Objectivity and again objectivity, and expression: no hindside-beforeness, no straddled adjectives (as ‘addled mosses dank’), no Tennysonianness of speech; nothing—nothing that you couldn’t, in some circumstance, in the stress of some emotion, actually say. Every literaryism, every book word, fritters away a scrap of the reader’s patience, a scrap of his sense of your sincerity. When one really feels and thinks, one stammers with simple speech; it is only in the flurry, the shallow frothy excitement of writing, or the inebriety of a metre, that one falls into the easy—oh, how easy!—speech of books and poems that one has read.

A turnabout, surely. It’s in “I Gather the Limbs of Osiris” that Pound, talking about the “luminous detail” (“the method of Luminous Detail, a method most vigorously hostile to the prevailing mode of to-day—that is, the method of multitudinous detail, and to the method of yesterday, the method of sentiment and generalization”), aims rather devastatingly, though a century or so avant la lettre at the “multitudinous detail” of something like Ron Silliman’s The Alphabet, fill’d irrefragably up with detail “of equal import.” Pound: “The artist seeks out the luminous detail and presents it. He does not comment. . . . As scholarship has erred in presenting all detail as if of equal import, so also in literature, in a present school of writing we see a similar tendency.” There’s the mystery of whom exactly that 1911 “school” consists, and Pound avers without compunction: “But this is aside the mark.” And so it is. 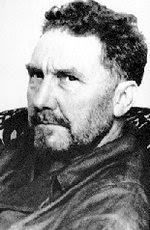