How dubious, with the reproaches of late Sunday descending, the brilliant white sun dirtying itself up mid-plunge, aiming for a sizeable slot in the cloud-bank, is the fossicking in half-skim’d books, looking for a way out of the clutter of the half-grappled with, the un-elided feints of a befoul’d “thesis.” Still winter, unendingly: “The extreme austerity of an almost empty mind / Colliding with the lush, Rousseau-like foliage of its desire to communicate / Something between breaths . . .” How to get down with the lingo. Terrific chapter about Ashbery’s Auden in Aidan Wasley’s The Age of Auden: Postwar Poetry and the American Scene (Princeton University Press, 2011), with, contra the Bloom-insist’d “American Sublime” Emerson through Stevens lineage, Ashbery’s retort: “he sort of ignored Auden’s effect on me.” And: “Auden was the most important because he came first.” Wasley quotes an interview wherein Ashbery recalls beginning to read Auden intensely in 1944 at the age of seventeen at the recommending of a friend who taught at the University of Rochester: “She was the only person I knew who’d read any poetry and she told me I should read a lot of Auden’s poetry. . . . So I did and I found myself seeming to understand it and became mad about it.” And uncovers an Ashbery-pen’d essay of the “era” call’d “Recent Tendencies in Poetry” wherein Ashbery singles out Auden for importance, and mimics Auden’s own sense of “double focus”—that dialectic tension and split between a poetry of practical civic use and the enigmas of self: “poems are complex because they must spring from a mind which has been made complex by its double-existence—its social responsibility and its inward enigma.” Not exactly a Keatsian capability “of being in uncertainties, Mysteries, doubts without any irritable reaching after fact & reason”—though forever refusing, too, to uncountenance that “Penetralium of mystery.” (Wasley quotes Auden—in a review—marking off “the half-men and the half-women, the little either-or people,” lacking the dialectical ability: kin, one supposes, to Keats’s dodge failures, those “incapable of remaining content with half knowledge.”) Too, Wasley examines an Ashbery thesis (“for the most part unstudied by Ashbery’s critics”) call’d “The Poetic Medium of W. H. Auden,” written at Harvard in 1949. Its initial salvo:

It is often said that we read so-called “intellectual” poetry for its style rather than its content; anthologists and instructors assure us that Pope’s Essay on Man contains not a single fresh idea; that its saving feature is the vigor and grace with which it expresses old ones. Such a false division between form and content presupposes two boxes, one of which contains old hashed-over idea which everyone assimilated years ago, and from which the poet takes whatever he needs to “stuff” his poem; and the other, brand-new, unthought of ideas, to which the philosopher resorts when seeking inspiration. But there are no new ideas, any more than there are any old ones; there are merely old and new ways of looking at the world. Every new poem is a fresh discovery, and Pope stands acquitted on the charge of commonplace subject matter; “what oft was thought but n’er so well expressed” might as well be what n’er was thought for those who, but for the poet, might have understood the idea but not been able to apply it within their realm of experience.

Something of the “stance” of Ashbery’s later note regarding O’Hara’s poetry (“a source of annoyance for every stripe”) here, “rejecting all” poised against an omnivorous shoveling in: “new” versus “old” hardly to the point. Compare with Auden’s remarks in “The Poet & The City” (1962) regarding “the word tradition”:

It no longer means a way of working handed down from one generation to the next; a sense of tradition now means a consciousness of the whole of the past as present, yet at the same time as a structured whole the parts of which are related in terms of before and after. Originality no longer means a slight modification in the style of one’s immediate predecessors; it means a capacity to find in any work of any date or place a clue to finding one’s authentic voice. The burden of choice and selection is put squarely upon the shoulders of each individual poet . . .

So much for the bum-eschatological trajectory of the avant-garde squadron, pushing ever “further.” In “use,” Auden’s manner of “choice and selection” gets spell’d out by Ashbery in terms one sees, in retrospect, as unerringly “Ashberyesque”: “Instead of a traditional presentation and examination of an object, its illumination through metaphor and simile, Auden gives us lists of objects interesting and significant without description; which are, indeed, often only named, and then draws or allows to be drawn the poetic conclusion.” And:

Such a poetic theory seems peculiarly of our time. In the first place, when we think of the ubiquity of the list, the sheet of tabulations, in almost every category of modern life; in science, business, even in popular poetry—think of the numerous popular songs in which the beloved is designated by lists of desirable objects (“You’re a Paris hat, a month in the country, a hot fudge sundae,” etc.) it is not surprising that a poet so completely contemporary as Auden should have absorbed the process. Secondly, our age seems to be characterized as well by a rapid drawing of conclusions from certain particulars—one thinks of scientists, technicians, and even our present-day conversation, which, in growing more sophisticated has tended to make a code of all that can be observed easily or rather easily, and is able to adduce particulars immediately when a name, a quality is mentioned.

That sense of conversation, its “code of all that can be observed easily or rather easily”: think of Ashbery’s ineluctable fealty to bits of demotic. In another example of Auden’s discriminant and consider’d omnivorousness, looking at Auden’s 1930 play Paid on Both Sides, Ashbery points to its Joycean registries:

It is rather futile to talk about “influences” in Paid on Both Sides, as it would be to discuss influences on Joyce in the “Oxen of the Sun” (hospital) episode in Ulysses. A literary influence usually implies an unconscious or semi-conscious assimilation of authors which slowly alters a writer’s style into something new. Auden, like Joyce, has gone out of his way to imitate many styles, and if, in doing so, he has finally achieved stylistic detachment, he has reached that state fully conscious of the direction in which he was traveling. At any rate, the many styles which occur throughout the early Poems and throughout the individual poems themselves are drawn from many sources: besides the saga language, we find technical and scientific terms, contemporary argot, Shakespearean rhetoric, satires on occasional, “family” verse, and the clumsy meter and rhyming of the political broadside, all jostling each other, yet in most cases seeming to form a unified and satisfactory whole. It is our task to discover how and with what justification, what purpose, the poet has used these sources.

Think of Charles Bernstein’s highly over-wrought and limit’d use of “the clumsy meter and rhyming of the political broadside” in recent years in pieces like “The Ballad of the Girly Man” (“A democracy once proposed / Is slimed and grimed again / By men with brute design / Who prefer hate to rime”), so irony-encrust’d it fails its encaustic intent. Ashbery’s final lines point to Auden’s “use”:

His poetry is, as Hindemith describes his own music, “for use”; its beauty as poetry functional, though surpassing whatever “pure” poetry we have today. He has absorbed certain common techniques of thought (the cataloging, the characterizing by denoting an unusual quality) and rhythms (those of the cabaret, the birthday card, the political broadsheet) which are very much a part of our life, using them to convey ideas which matter very much to us. If he is not a great poet, a decision which must be made by time, he has brought innumerable people closer to the world in which they live.

One recalls Ashbery’s chewing over Auden’s line “poetry makes nothing happen.” Ashbery: “It doesn’t, but its value is precisely the fact that it doesn’t, because that’s the way it does make things happen. The pleasure that you get, if you love poetry, is a pleasure that’s going to cause you to act, it forces you back into life. Poetry is in fact—I was just reading a quotation from Hazlitt—not a branch of literature but life itself . . .” Akin, perhaps, to O’Hara’s cheeky “Personism” line: “one of its minimal aspects is to address itself to one person (other than the poet himself), thus evoking overtones of love without destroying love’s life-giving vulgarity, and sustaining the poet’s feelings towards the poem while preventing love from distracting him into feeling about the person.” Double focus’d. 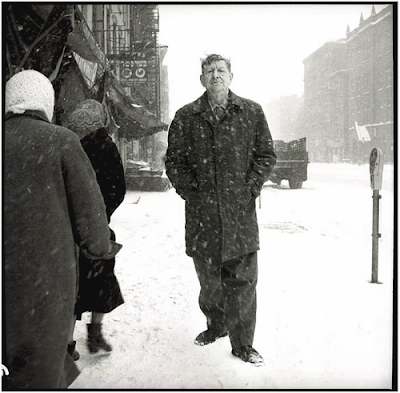