Fetch’d the bicycle out of the gritty drubbings of the snowbank, now gone, it’d lean’d against all winter, and rode it in, in the skunk-scent’d “morn.” Stuck in the big-shoulder’d city all weekend, back home for midnight’s sour reproach, a beer and a few maudlin Audenisms prised off the page. (Everywhere now one sees Audenesqueries ready for Ashbery’s plucking—who’d begin a sestina call’d “Have a Good Time” with “‘We have brought you,’ they said, ‘a map of the country; / Here is the line that runs to the vats, / This patch of green on the left is the wood, / We’ve pencilled an arrow to point out the bay . . .”?) So that—with the disorientating clock-change—one succumbs to pawing at finicky relativisms, forever detailing only how serendipity, that cataclysm, refuses to yield its runty nug “up” out of the oceanic reams of page-turning (Dickinson full leveling drone is apt here: “Like Trains of Cars on Tracks of Plush / I hear the level Bee . . .” or Faulkner’s line in “The Bear” about how “the engine’s exhaust was already slatting in mounting tempo against the unechoing wilderness, the crashing of draw-bars once more travelling backward along the train, the caboose picking up speed . . .”) Something there is that frets against mere conjurers today: the world too plat’d into its zones of misery and the seemingly temporally redeem’d. (Think of Stephen Spender, in 1935, quoting Yeats with approval: “We can no longer permit life to be shaped by a personified ideal, we must serve with all our faculties some actual thing.” And adding: “The ‘actual thing’ is the true moral or widely political subject that must be realized by contemporary literature, if that literature is itself to be moral and serious.”) Though, wary of any ideology, one unpits—recall that decorticate is defined not by the ripping out of the heart, but by the stripping off of a disguise—the lousy demagogue with Auden’s “I saw the brain-track perfected, laid for conveying / The fatal error, / Sending the body to islands or after its father, / Cold with a razor . . .” A leaner train, merciless with certainty. “Certain”: how it is liable to convey a select’d particular, a choice against a sense of the unerring, the sure, the restrict’d and fix’d (“Knowledge no need to us whose wrists enjoy the chafing leash”), that narrowing danger of the “moral and serious” strain. In Auden’s commonplace book, A Certain World, he records Georg Christoph Lichtenberg’s definition of a donkey as “A horse translated into Dutch.” Or, fittingly for today, two versions of the sonnet “Brussels in Winter.” One out of the 1945 Collected Poetry:

Wandering the cold streets tangled like old string,
Coming on fountains silent in the frost,
The city still escapes you; it has lost
The qualities that say “I am a Thing.”

Only the homeless and the really humbled
Seem to be sure exactly where they are,
And in their misery are all assembled;
The winter holds them like the Opera.

Ridges of rich apartments rise tonight
Where isolated windows glow like farms,
A phrase goes packed with meaning like a van,

A look contains the history of man,
And fifty francs will earn the stranger right
To warm the heartless city in his arms.

Wandering through cold streets tangled like old string,
Coming on fountains rigid in the frost,
Its formula escapes you; it has lost
The certainty that constitutes a thing.

Only the old, the hungry and the humbled
Keep at this temperature a sense of place,
And in their misery are all assembled;
The winter holds them like an Opera-House.

Ridges of rich apartments loom to-night
Where isolated windows glow like farms,
A phrase goes packed with meaning like a van,

A look contains the history of man,
And fifty francs will earn a stranger right
To take the shuddering city in his arms.

An industrious unslumbering man’d assess the various changes and “unpack” (is it here one finds the fons et origo of that term? the way it’s annoyingly become dud-workingman’s vocab for the roll’d-up sleeves variety of critic?) that drover’s van of meanings like a man, phrasal, certain, and adept, though I am not that man . . . 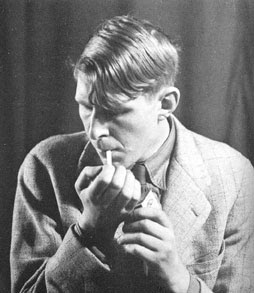