With the title, “The Meaning of This,” Steve Benson’s final essay makes (in The Grand Piano #10) the initial move toward summary (verging toward the memorial, if not fatuous, bowings out: “Knowing you, through shared and reciprocal attention and activities, created deepening, decisive means to know myself. Loving you has allowed me better, more fully, to love myself . . . I know you, and you, and you, my esteemed interlocutors, and I am convinced by the surprise of unexpected recognitions you incite in me”)—echoes of The Sound of Music’s “Adieu, adieu, to you and you and you” there, a kind of plimsoll’d demi-plié—a “meta”-step—and provides some history regarding the project’s origins:

In 1999 at the Page Mothers Conference on innovative writing by American women at UC San Diego, in conversation with Jen Hofer and Lyn, Carla proposed that some kind of collective history of the Language school be written, to provide an alternative record based in recollections and analysis by the participants to counter some distorting accounts then circulating. Jen suggested a set of essays to incorporate into a special issue of Aerial devoted to Lyn’s work that she was editing (still forthcoming). But Carla made clear that contextualizing this project within a festschrift for a single author would contradict its intentions, and we further found that the Aerial issue wasn’t going to happen anytime soon, while we got increasingly interested in working together to see what we could do together. We speculated how best to proceed and began to insert drafts within a grid on a website that also fell apart as circumstances changed. By 2005 we had rallied to the plan for these ten volumes, agreed on a division of labor, and set the schedule we have struggled to maintain.

I love that “rallied”: forces suddenly assembled, or re-assembled out of some repulse or dispersal. What’s hid is the instability of that “we”: how is it that the “we” of Hejinian and Harryman (with Hofer prodding) becomes the “we” of the final ten (or eleven, counting Bernheimer) grandees? How, too, one thinks, conjoin the end—“to counter some distorting accounts”—with Benson’s talk of the project’s “preposterous dimensions and the opportunity to play with dear friends”?

If we were going to be setting the record straight it would have to be slant, diversely (if not divisively) so. We’ve come at this form from different angles, not knowing in advance how they would skew the consequences or just what others they might engage and how.

Probably helps explain why so little of “record” finally outs in the volumes. (Benson does supply a tiny history of other occasions of “expository, reflective, and narrative group work” amongst (some of) the participants preceding The Grand Piano: a “six-person introduction” to “a selection of Language writings to be translated in France for Change magazine, within the context of a larger issue focusing on “L’Espace amérique” (1981); the paper call’d “Aesthetic Tendency and the Politics of Poetry” in Social Text (1988)—“editors unexpectedly appended “A Manifesto” as subtitle”; and Leningrad (1991)—“in response to . . . participation in 1989 in the first international conference of avant-garde writers to be held in the Soviet Union.” Of it, Benson notes only the spuriously formal: “This work, intended as a composition both continuous and contrapuntal, identified each writer’s contribution only through a set of icons keyed to the contributor in material prefatory to the text.”)

Is there a kind of vacuum, a hollow at the core of Language writing? I’m somewhat perplex’d by Benson’s (rather principle-stating) insistence (in a footnote) that, in “our enterprise” (note the market lingo), “affinity and social integration trump all assertions of principle.” That under a page detailing how

Our poetry and projects were experimental in a social but not a scientific sense. I don’t remember any hypotheses anyone felt responsible to disprove. Our trials of literary problem solving intended social consequences from their reception.

Between the pat fuzzy-wuzziness of “affinity and social integration” and the puppet mastery (or need for attention-getting) of “intended social consequences”—considerable differences.

Reading Benson’s piece a day behind Harryman’s, I suffer’d a momentary twinge of thinking: is there a Language writing house style (or method)? Benson begins:

I remember a category of monuments, such as Ted Berrigan reading a blue book over my shoulder to Larry Eigner. You haven’t functionally grown up, you’re sullen at work, going months with a disaster I think the era of my existence. Playing ball, making plans. I know I will recall it myself, and I want it to move me, social discourse.

The first of several such verse-intrusions, here footnoted thus: “Unless otherwise indicated, indented portions are drawn from a writing exercise on November 1, 2009, listening to myself reading aloud on four tracks at once: on two of the tracks I was reading passages from all the Grand Piano authors in parts 1-9, and on the other two from my journal and published writings from 1980.” Ulp. If one reads oneself aloud, is that “social discourse”? Quoting a 1980 journal entry a few pages along, Benson writes: “Style = the play of the interdependency of limitations.” (He’s making a report while bus-riding: “Listen to different people, their statement, address, as carriers of what . . .” Carriers? Is that “social discourse”?) One thinks of Burroughs’s “Language is a virus . . .” Something complacent and oh, mildly parasitic / sycophantic about a method that so indefatigably feeds off itself (and others). And, well, subject to “limitations.” Harryman’s mash-up “duet” encore. In another of the “indented portions” one reads: “Appropriation’s lonely.” 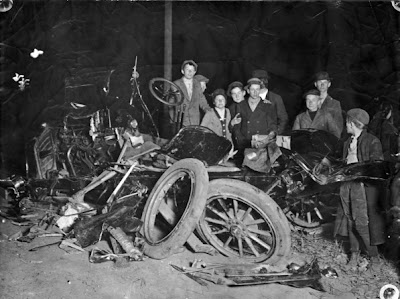