In the ‘search for oneself,’ in the search for ‘sincere self-expresssion,’ one gropes, one finds some seeming verity. One says ‘I am’ this, that, or the other, and with the words scarcely uttered one ceases to be that thing.

I began this search for the real in a book called Personae, casting off, as it were, complete masks of the self in each poem.

’Tis as in midmost us there glows a sphere
Translucent, molten gold, that is the ‘I’
And into this some form projects itself . . .

Hoofing one off, clumsy in spats, to see what Pound’d ever writ about Rimbaud. Some possibly blotto concept forming in the brainbox of some boffo “essential masquerie” (oxymoronick’d) “in the air” circa the late dribbling-off of the nineteenth century. (See Pater’s note, opening the concluding pages of The Renaissance: “To regard all things and principles of things as inconstant modes or fashions has more and more become the tendency of modern thought.” And: “This at least of flamelike our life has, that it is but the concurrence, renewed from moment to moment, of forces parting sooner or later on their ways.”) Pound writes of Rimbaud (“a difficult case”) in late 1913 in a series of pieces for The New Age call’d “The Approach to Paris.” After some unnecessarily complicated talk of “brevity” (a thing “French writers persistently refuse to acquire”—although they “may produce an occasional writer who does not write too much,” Rimbaud being both “the stock example” and “not really an exception”—“He simply quit writing”), Pound directs attention to a kind of haphazardry in Rimbaud’s work: “comparable to the beautiful forms made by chance in some process like the oxidisation of silver crystals than to figures carved by an artist.” Too, he points to “chance hints of things that are only reacquired with great labour.” Pound’s offhand dismissal of any innovatory formal tendency in Rimbaud: “As for prose-poetry, I suppose no one will deny that it is at least as old as Ossian.” (Carr somewhere notes another example—in 1915—of Pound’s referring to Ossian “without betraying any indication that he was aware the work was generally consider a fake,” being pastiche-work of the eighteenth century Scottish poet James Macpherson.) Rimbaud is, for Pound, both “bitten with the pox of rhetoric,” and unable “scarcely ever [to] let out a noun unchaperoned.”

Pound’s reprise of Rimbaud in The Little Review piece call’d “A Study of French Poets” (1918) makes an argument for a Rimbaud plus sérieux—and plus important (“The actual writing of poetry has advanced little or not at all since Rimbaud” *), and for poems with a kind of surety: “thick suave color, firm, even” and “such firmness of coloring and such certitude.” Admitting that “Comparisons across an art are always vague and inexact, and there are no real parallels,” Pound proceeds to make Rimbaud a word-wielding Cézanne: “Rimbaud does not endanger his intensity by a chuckle. He is serious as Cézanne is serious.” Pound, in 1920, responding to Williams’s Kora in Hell: Improvisations:

Inclined to think it best you have done. Don’t know that it is more incoherent than Rimbaud’s Saison en Enfer; nor yet that it could be improved by being more intelligible. Still, am inclined to think it is probably most effective where most comprehensible.

And, a day later (12 September 1920), whilst admitting it of “No importance”—it “proves only that populous French are insular, like to think their country is noticed, etc.”:

(In the slurry drawl of the weltschmerz’d up cosmopolite: “Yeah, that’s stuff I’ve seen before, that’s just Rimbaud!”)

All rather stranding high up against the drain’d lake bed of Pound’s contrary if one wonders about the approach of “Je est un autre” into the Poundian “strain.” Did Pater read Rimbaud? What’s the point de repère for that Rimbaud remark? (I mean beyond the 13 May 1871 letter to Georges Izambard.) Did Pound read the “lettre du voyant”? Who plucks it up and makes it the strident squeaky hinge of a change of percept? That “I” do not know. 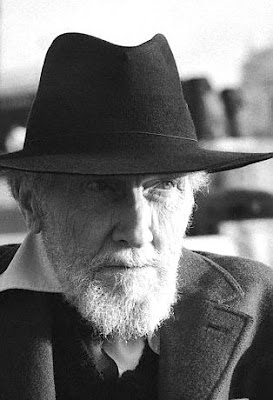