XC
Things (all things) conspire (harangue and wheedle and menace)
Against the attempt (minor, apostolic, blunt) to live deliberately
(Thoreau): the thin (India paper) pages of the book (anthology, nineteenth
Century, ecumenical), rifled by a gust (zephyr, chinook, sirocco), mount
A momentum and continue turning: the book snaps shut. A perfectly
Idiotic statement, result and casualty of some distant atmospheric un-
Buckling, a cloudlet letting its trousers down. It unleashes a gravid un-
Encumbering breeze, pregnant with moisture and intent. If I walk along
In the cold air of night (with the dog) and long for extend’d periods of
Clarity and focus un-cheesed by one’s own spoilage, by one’s un-
Scour’d tendency to curd and lump up, or sulk off into mannerisms of aim-
Lessness and disarray, green in the spent-green grass, blue in the sun-
Blonde sky, who’s to yell comeuppance against the attenuating strings of
Squalor and breakdown unrebuff’d? That tacky thing that keeps me here,
Rarefying the unsavory, collapsing the gait spasmodic, plow’d and madly un-
Available.

And, breezing, desultory, in my continuing unfocus’d (scatter’d) way of reading everything and nothing (call it “traipsing acedia”), I come across Clark Coolidge (Now It’s Jazz) talking about Kerouac and Shakespeare, how (Kerouac says), S. “wrote in an inspired hurry what he immediately heard sound-wise while his steeltrap brain kept shutting down on the exigencies of plot and character in that sea of ravening English that came out of him.” (A writer makes all other writers mimic him.) What grab’d me more, though, is Coolidge’s quoting out of a Kerouac letter to Ginsberg (regarding Howl), the high-mast’d Shakespeare-mimicking line: “the first spout is the only spout, the rest is time’s tired faucet.” (Back to origins of the tidy’d up, market-savvy, diluted “First thought, best thought.”) And of course it’s sexual, the post-release (the written, the flaccid) no longer pure. (Kerouac, at the beginning of a monstrous “full confession of my life” letter written to Cassady, renouncing all “fiction and fear” says: “There is nothing to do but write the truth. There is no other reason to write. I have to write because of the compulsion in me.” And, more to the point, makes of Cassady—talker, letter writer—a saint precisely for refusing anything beyond “first spout”—no harlot he—“From you I expect no such protestations of coy dishonesty; because you never sinned, you never were published and became the great American harlot-writer they all are; pure, you remain in your proper solemn underground, or holy hole, and I join you . . .” (December 28, 1950).

And, Kerouac (back in Visions of Cody) talking about “a way of abstracting the interesting paragraphs of material in all this running consciousness stream that can be used as the progressing lightning chapters of a great essay about the wonders of the world as it continually flashes up in retrospect”—that lightning forking out and down to blaze up everything in a zig-zag of connectedness (“radiant”)—so (long way around the back acre to the well) Coolidge (elsewhere, in a Naropa talk) quoting Zukofsky quoting Spinoza: “The more an image is associated with many other things, the more often it flourishes . . . the more causes there are by which it can be exited.” That putting of things into relation (metaphor) at the heart of writing—and, as Coolidge unbridles that same horse to make it run lightning-swift (he’s quoting Philip Guston, who’s talking about painting):

It cannot be a settled, fixed image. It must of necessity be an image which is unsettled, which has not only not made up its mind where to be but must feel as if it’s been in many places all over this canvas, and indeed there’s no place for it to settle—except momentarily.

Or the juice begins spouting all over—Olson’s c. 1951—“And I think it can be boiled down to one statement (first pounded into my head by Edward Dahlberg): ONE PERCEPTION MUST IMMEDIATELY AND DIRECTLY LEAD TO A FURTHER PERCEPTION,” and “speed, the nerves” (another entry in the nerve movie lexicon of a few days back) and “one perception must must must MOVE, INSTANTER, ON ANOTHER!” (Is it possible to argue that that is a putting into relation—wobble and succession—of sorts? Where’d Dahlberg do that pounding?) I am arguing for what exactly? Concomitance in a heap? Okay, piecemeal and inchoate the grubbing in the old yards. My sense is one of a hash-slung accompaniment intervening, food fight in the kitchen, pee in the broth. One writes to write through the confusions of writing (amongst other things). “I heard a thousand blended notes” (Wordsworth)—“But I had my own little bangtail ideas and they had nothing to do with the ‘lunatic’ part of all this”—(Kerouac). 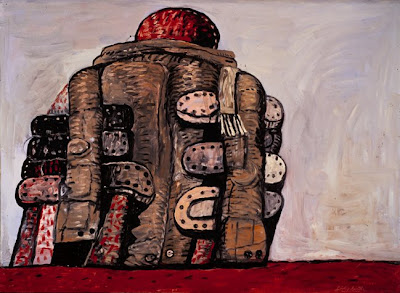